Uferstudios is one of the melting pots of the free theater and performance scene of the city. Embedded into the old workshops of the public transport company BVG it consists of a string of studios that are either occupied by theater companies and directors or can be rented for shows or rehearsals. Most of the time there is some kind of program there, a festival, theater productions, performances, installations, or some other crazy thing. Also, keep an eye out on the Uferhallen across the street where there artist studios and big exhibitions from time to time.

The famous multi-talent clothing store/ice cream shop / café Kauf dich Glücklich has made dreams come true: An Outlet for the amazing fashion they offer. Just a lot less expensive. Shop ’til you drop in the backyard of Gerichtstraße!

Mirage is maybe not super new, but we still haven’t given this gorgeous place in Wedding some attention here on the blog – about time! From the lovely interior and its sunny bright spot by a bigger square, we come right to the lovely food menu with colorful bowls for breakfast or tapas for the night. Also, check their changing exhibitions and cultural program at night. 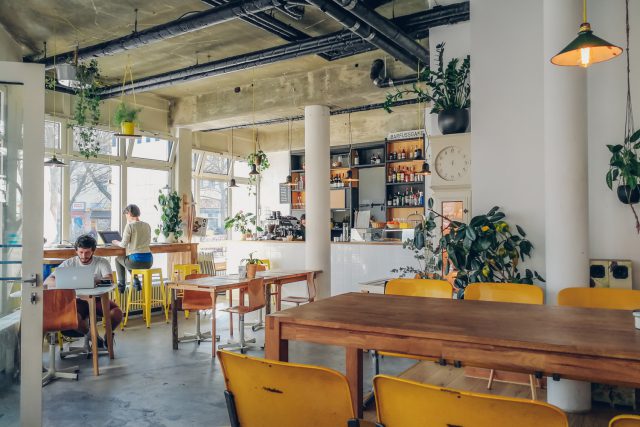 Ok, we admit it, since we mentioned it before: We are a huge fan of the Café Pförtner.
Located at the entrance of the Uferhallen, former workshop of the Berlin public transport company BVG, the Cafe Pförtner used to be the office of the gatekeeper, hence its name. The cafe was introduced a few years ago as a canteen for all the artists that work at the Uferhallen and the performers from the Uferstudios from across the street offering breakfast, lunch, and dinner for quite low prices while having a really exquisite dishes that you would rather expect from a trendy restaurant in Mitte. Over the years the cafe has also attracted the cool crowd from Wedding and Mitte who like to come here to have a peaceful and alternative place from the commercialized center. Especially in the summer, it’s a lovely spot to have coffee and cake outside in the sun or even in the abandoned bus that also hosts a few tables.

Welcome to the avant-garde side of Wedding. Baldon is located in a quite special and impressive Brutalist building in Wedding and it’s mostly a lunch and breakfast place. But Thursdays they also offer dinner. The place itself looks quite impressive. 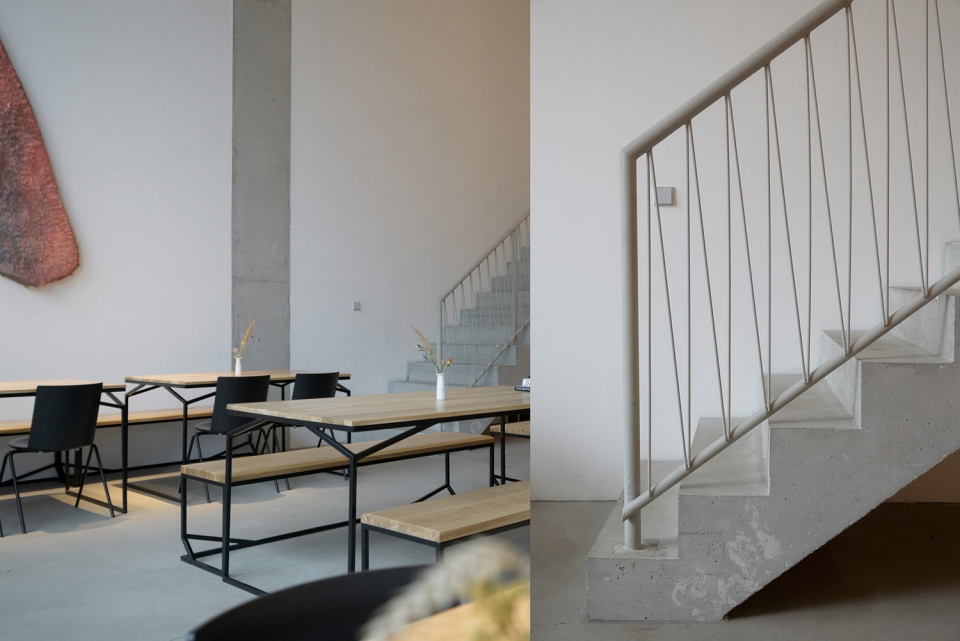 The perfect spot for a freshly baked cake or a leisurely breakfast on a lazy Sunday afternoon, this vegan/vegetarian breakfast and brunch restaurant have lots of offer. They serve a wide variety of delicious treats, from Nutella-hazelnut cakes to hearty Schnitzels, all made and served by a super friendly and vibrant team.  Just like their name suggests, they are in search of lost happiness. The owner, Tina, believes that we are traveling too fast, and encourages guests to slow down and take a pause in their busy day while enjoying a nice meal.

Sometimes it’s the little things that make a place stand out in the crowd. In my case, the verdict about the pizza has a lot to do with the amount of crudo they put on the crudo pizza. In the case of a restaurant that already has Parma in its name, you can expect a lot of parma! A dream come true for me. 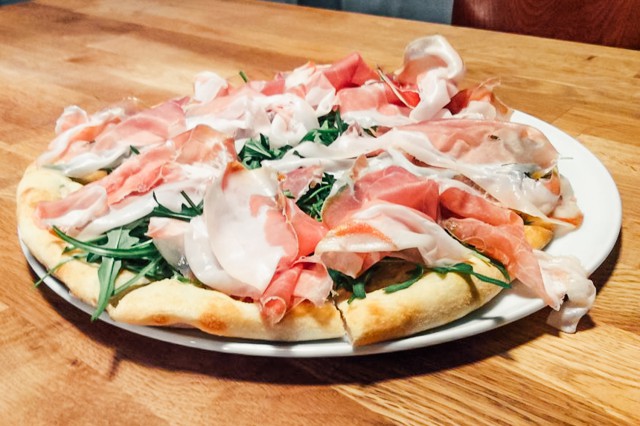 Berlin is really good at re-purposing old places. Factories turn into clubs, old bunkers turn into art galleries, and in Wedding, a crematorium has been converted into a new cultural space called silent green which includes a very nice restaurant and art gallery space. The restaurant is called Mars, and it sits in the middle of the old cemetery. The food is wonderful, as is the architecture. It feels very refined and classy, but not in a stuffy, expensive way. It’s chic and sophisticated, but approachable.

Tucked away from the busy streets of the city, Fünf und Sechzig serves traditional German cuisine in generous portions with more-than-reasonable prices. The atmosphere is very relaxed, without any rush, and given that it’s not a gourmet restaurant, the food they serve is always great quality. On top of the traditionally-seasoned German dishes, they also have a whole list of drink specials with an impressive beer, wine and cocktail list. Often labeled as the best German restaurants in the Wedding, this intimate eatery has an often-changing but always promising menu that will have you going back for more.

Good coffee is worth a million bucks. A nice atmosphere in addition to that is the cherry on top. Il Milanese del Tacco is one of those charming Italian cafés that know the art of a good coffee and a nice chat. With tasty sandwiches and many other delicacies, this is a café you shouldn’t miss.

Basalt a pretty cocktail bar that serves high-quality cocktails that will not only give pleasure to your tongue, but also to your eyes. The bar is all in green incorporating a lot of plants and leaves into the interior creating an almost jungle-like, and definitely cozy atmosphere.

Embedded into the third backyard of an unsuspicious looking house at Gerichtstraße that has somehow become a nightlife hub in recent years the bar Anita Berber is some sort of well-kept secret of the bar scene of Berlin. It’s exceptionally cool interior attracts an equally cool, yet grown-up crowd. During the week it’s mostly a bar, but on the weekend they also have parties with DJs. They often have live shows, sometimes with even quite famous people such as Pete Doherty. They pride themselves with their delicious and good-looking cocktails.

On Fridays, they serve 3 special cocktails on top of the regular menu—a mix of classics and modern creations. Every Sunday, they host experimental live music sessions (Series) and every 3rd Sunday of the month, they host live analog synthesizer sessions (Ground Experiments). Analog synths, friendly owners, inventive cocktails and great atmosphere—how can you go wrong?

Cozy but sophisticated, The Forsberg often gets crowned the best bar in Wedding, and with good reason. On a regular night there, you will sit in candlelight while being served a strong cocktail by Charles, one of the most welcoming bartenders in Berlin. What you may not realize is that he is also the talented artist behind the paintings on the walls, as the space was initially geared towards being his “atelier/exhibition space that also serves as a welcoming place to meet and have a drink on the weekends.” Charles recognized Berlin as one of the few places where this would not only be accepted but also rather encouraged. Check their Facebook page for special events like poetry slams, exhibitions, and private parties.

The Kiki Sol is a meeting point for students, artists and anyone in between. With a broad range of offers, Jam Sessions every Wednesday and Friday and many other great events and good drinks, the Kiki Sol is the perfect spot to hang out. You should check their events here.

Café, music, art and ideas. PANKE define themselves with these words, which can be attributed to the creative up-and-coming artists they provide exposure for, their regular events, a menu filled with delicious comfort food, workshops, film screenings, performances, talks and much more. PANKE consists of four main spaces: a bar and café, serving vegan/vegetarian food, a club which hosts larger and more complex events, a gallery featuring single-room, specific-purpose installation work on various media, and a garden/backyard which serves as a host to outdoor events.

Opened in May of 2013 next to a park of the same name, Humboldthain now serves as the focal point of the electronic music scene in Wedding. On top of the parties they host every weekend, they also transform into a sports center each Tuesday, with table tennis taking over the dance floors as DJs set the mood by spinning their tracks for “Open Deck” night. Unlike some other clubs here in Berlin, Humboldthain still has a relaxed atmosphere—no long queues or strict bouncers here—as long as you’re there to have a good time (and pay the 10€ entrance fee), you’ll be stepping through those hallowed halls to dance to some of the top DJs here in Berlin.

The Rose Garden at Humboldthain Park is probably one of the most precious gardens of the city and due to its secluded location on the side of the park surrounded by thick forest and with only one gated entrance, it’s pretty much a hidden gem that a lot of people in Berlin don’t even know about. Only accessible in the summer time the garden hosts a wide range of different roses arranged in beautiful Victorian garden structures with as many romantic scenarios you can dream of. There are also other types of flowers on a little hill facing the Flak Tower.

Open daily in the summer, Brunnenstraße 108A, 13355 Berlin-Gesundbrunnen (U/S-Bhf Gesundbrunnen)

The Humboldthain is one of the biggest and most beautiful parks of the district of Wedding. There are a lot of opportunities for fun activities for instance at the public pool inside of the park, children’s playgrounds, climbing on the facade of on old bunker, wine gardens and a lot more. So there is a lot to do and to explore in this huge green oasis.

The Flak Tower at the Humboldthain park is one of three anti-aircraft towers that were commissioned by Adolf Hitler in 1941 to protect the city center of Berlin from aerial bombardment. There were not only canons on top of the tower but also a bunker underneath that could hold up to 15.000 people. After the war, the bomb-proof building was blown up in large parts by the French and turned into a pile of rubble. Over 50 years later the Berlin Underworlds Association managed to make the remaining ruin save for entry and its now open to the public. If you go there you can either climb on top of the towers and enjoy the view over the city, or if you are prepared to get dirty you can even go inside with one of the guided tours.