The season of skulking through the dark nightclubs and dirty bars of Berlin is over, guys! It’s time to go outside and enjoy the sun. Well, we might not have a very long and intense summer here in Berlin (sadly). But those golden days that we get, we like to use as much as we can. And where do we like to go? Every where we can have a drink without a roof over a head. Preferably something with a view, or inside the green, or at the water. Well, luckily we have plenty of places in Berlin that fulfill these criteria and we’ve selected 10 of our favorite ones including some old classics and some brand new hotspots. Enjoy our list of awesome outdoor locations!

If you like to enjoy the sun in Berlin with a great view over the entire city than the Klunkerkranich is your kind of place. Located on the rooftop park deck of the Neukölln Arcaden the place is an alternative project combining gastronomy with urban farming and party life. You can have a coffee or snacks in the afternoon, a beer in the evening of even dance in the night, always being surrounded with the skyline of Berlin. There are also special events such as open air screenings and seasonal markets. To enter you have to take the elevator near the post office into the 5th floor and walk up the remaining park decks until your reach the top.

Right at the intersection of the Landwehrkanal and the Spree, behind the popular Chalet club you find a new place called Birgit&Bier that opened in the summer of 2015 and already made a name for itself. It’s a beer garden during the day and evening and turns into an open air club at nights. The style of the place reminds us a lot of clubs like Kater Holzig, Renate, Else and Ypse, so it’s a bit like an improvised wooden shack squeezed into some forgotten corner of Berlin. But this is totally what Berlin does: use any last piece of wasteland to grow something new and create a sanctuary for Berlin’s youth and nightlife culture.

The Jackie O Bar is a magical little place located at a former public bathing spot at the Rummelsburger Bucht. It’s a bit outside of the center, but actually not that far from Ostkreuz. The popular Sisyphos club is right across from it, but Jackie is far more under the radar for the young and wild party goers as they are mostly keeping a low profile with their events to maintain a more private and familiar atmosphere. We have had some truly enchanting evenings here, so we can’t possible leave this place out. They don’t have a public website or Facebook page, so you have to keep an eye out for their events in our event guide.

If you prefer the river over the view of the city we recommend you the Holzmarkt Pampa. Holzmarkt is a project for alternative lifestyle and pretty much a big contrast to the otherwise very commercial developments of the area around the spree commonly referred to as the Mediaspree. Here you find several different institutions such as a restaurant called Fame, a nightclub called Kater Blau, a gallery called Silber & Salz, a theater called Ding-Dong-Dom, an urban farming garden called Mörchenpark and so on. There is a big communal space called Pampa that has a couple of bars and food stalls that is great to hang out on and enjoy the sunset. They even have open air yoga sessions on a ship that’s parked in front of it every Tuesday and Thursday morning from 9-10 a.m. The same space was formerly the legendary Bar25 one of the most talked about open air nightclubs in the recent history of Berlin. The Holzmarkt is a project by some of the previous founders of the Bar25. 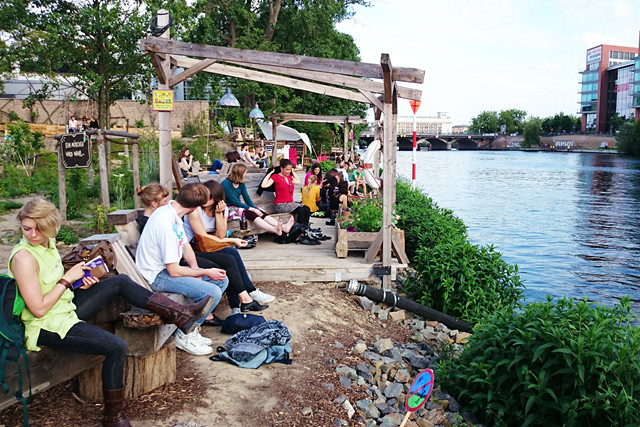 The Haubentaucher is a new space with a big outdoor pool on the RAW grounds in Friedrichshain at Revaler Straße that opened in 2015. It’s in a good neighborhood being surrounded by so many other awesome places such as the Urban Spree gallery, the Astra concert house,  and several other bars and nightclubs. The obvious benefit of this place is the huge pool, but even if you are not a fan of swimming you can still enjoy the loungy atmosphere (or the party if there happens to be one) around the pool. They also have open air yoga sessions at the pool.

Note that in high season this place has a crazy long line to get in and it has a bit of a club-like door policy turning some down people at the entrance.

If you want a space that totally makes you forget that you are in Berlin or in any other big city for that matter the Balinese spa and sauna Vabali is definitely worth looking into. The space is really amazing looking and has a huge outdoor area with a beautiful pool and several different saunas. The gardens outside full of bamboo trees really create the illusion that you are somewhere far away on an island. They also have a nice Asian restaurant and offer several spa treatments. Be warned though, I know especially foreigners are not used to this, but the place is a no-textile spa, so no bikinis or swim trunks, in the saunas and pools it’s nudy time 😉

The Badeschiff, an old containership transformed into a pool that’s swimming at the shore of the Spree, is an old but good classic perfect to get a splash of water on a hot day. It might get a little busy on really warm and sunny days, but the more the merrier you could say. In the evenings they also have music playing and the occasional parties happening there.

Wilder Hase is a pretty new beer garden and cafe at the mysterious location called Nirgendwo that’s located right next to Berghain. The gardens around the old storage building (called the dark tower) are decorated a little bit like Hobbit land which makes this a pretty big contrast to the triste outdoor area of Berghain right next door. The special thing about this new beer garden is that it’s completely vegan. They offer a vegan Döner and a lot of vegan cakes and bakery goods. Their opening in May was mistaken for a Sunday after hour and overrun by party folks, but soon it will become a place for tranquility as it set out to be.

Helsingforser Str. 11-13 (to the right of Berghain), 10243 Berlin-Friedrichshain

If you are looking for a lovely outdoor location further in the old West of Berlin we recommend the Cafe am Neuen See. It’s a slightly traditional but lovely beer garden and restaurant right in the middle of the green oasis that is the Tiergarten. It’s located directly at a little lake where you can rent boats. Charming!

Embedded between all the old and new buildings surrounding Moritzplatz in Kreuzberg you will find one green oasis that is the urban farming space and beer garden Prinzessinnengarten. It’s a lovely and peaceful place bringing together people from different ages, cultural backgrounds and districts who grow their herbs and vegetables here. In the middle of a small green forrest there is the cafe and beer garden. Sometimes they host special events, concerts, markets and workshops about urban farming.

The Hafenküche is lovely cafe and restaurant a bit outside of the center of Berlin at the Spree. You have a great view of the river over to Spreepark and Treptower Park and you can even rent little boats with picknick baskets to have a little tour on the water. They offer all meals including breakfast, lunch and dinner and their kitchen is a mix of popular international dishes and typical German style cooking with a lot of meat.

Do you know any other great outdoor locations, restaurants, cafes and bars that we should know about? Please use the comments below to add them to out list!