The Most Unusual Restaurants in Berlin

Berlin rarely comes short when it comes to original and unique ideas to make ordinary things more interesting. Take restaurants, for instance: Why eat in a normal place if you could also eat inside an old bus, in a greenhouse or in a gondola that came all the way from the snow covered Alps. For some dining experiences you just need a very special location for that extra amount of oohs and ahhs. We compiled a list of the 13 most unusual restaurants and cafes in Berlin that won’t disappoint you with their unique locations.

Neni is on the top floor of the 25h design hotel at Bikini Berlin. It is still fairly new, but already one of the most popular places in town to have dinner. Not only can you dine inside a beautiful greenhouse, you also have a wonderful view over West Berlin and the zoo.

On an Old Factory Staircase

La Soupe Populaire is one of the restaurants of star chef Tim Raue. Located in an old brewery, you are seated on an factory-style metal staircase with a view over an exhibition downstairs.

UPDATE: This place is currently closed due to reconstructions on the building, but is scheduled to reopen in the course of 2017.

Fame is the fairly new follow-up restaurant of Katerschmaus from the previously infamous Kater Holzig club (which was the follow-up of legendary Bar25). It’s located underneath the arcs of the S-Bahn track. But in the warmer months – from April/May until October – they also serve on the beautiful boat that lies right in front of the terrace at the Spree. 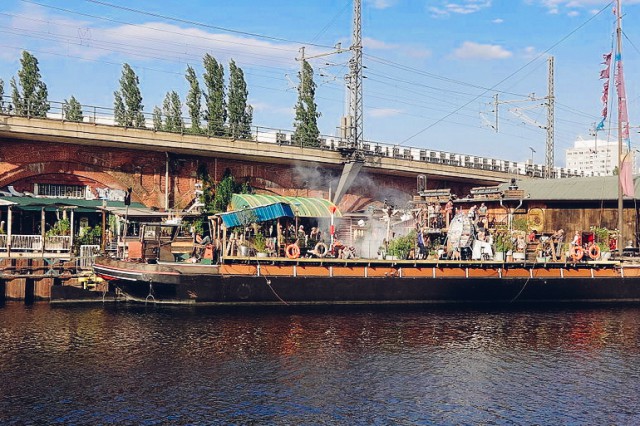 In a Mirror Ballroom

Clärchen’s Ballhaus is a truly charming gem – an old ballroom right in the heart of Mitte. Their precious antique mirror ballroom is used for private events and concerts, but also for pop-up dinners that happen once a month. Check the dates here.

In an Urban Forest

The urban farming and community project Prinzessinnengarten has a wonderful cafe and restaurant in the heart of their little urban forest, right at Moritzplatz in Kreuzberg. The meals are of course prepared with the products from their own garden. Due to the outdoor location, it’s only open from April til October. 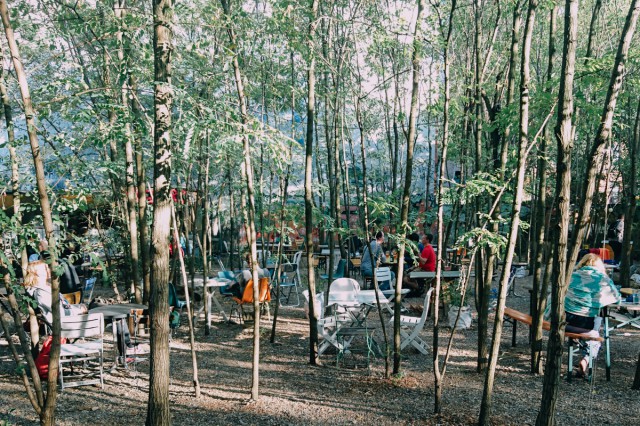 In an old Launderette

The Lavanderia Vecchia is a beautiful and charming Italian restaurant inside a former launderette/laundromat that keeps a lot of its decor and charm. 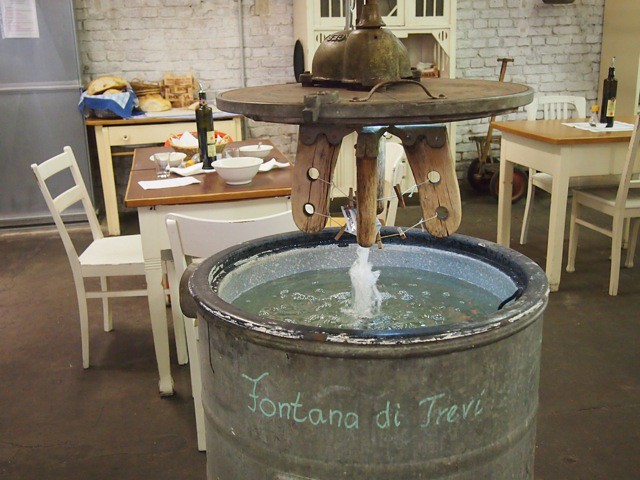 In a Chinese Teahouse

The Gardens of the World in Marzahn is a celebration of a lot of wonderful places. One of the treasures here is the old Chinese Tea House, which also serves food in addition to their millions of types of tea. In the Winter months it’s only open on weekends, when the weather is good. 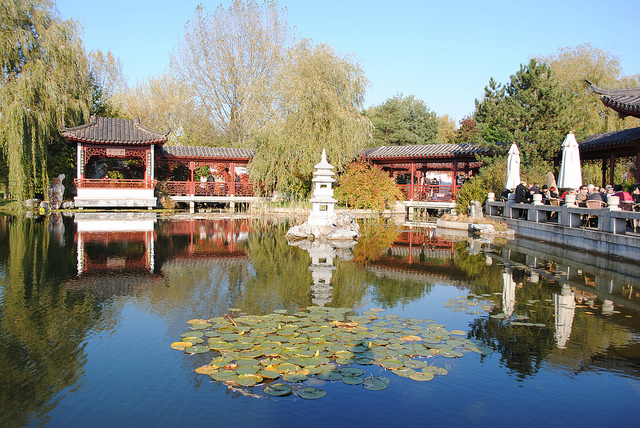 There are actually two darkness restaurants in Berlin, but I chose Nocti Vagus for our list because I have visited it with my family a while ago and thought it was a truly unique and fun experience – to dine in complete darkness. They also have theater shows in the dark while you eat. 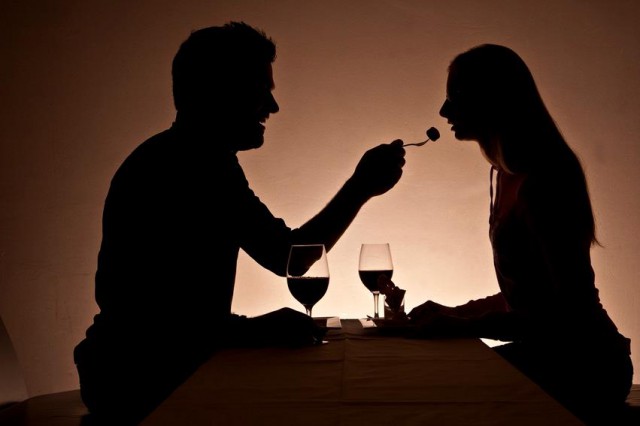 We don’t have all that many impressive castles in Berlin, let alone with nice restaurants in them. But the Schlosshotel Grunewald has a quite spectacular one called Vivaldi. You will feel like dining with the Royals there. 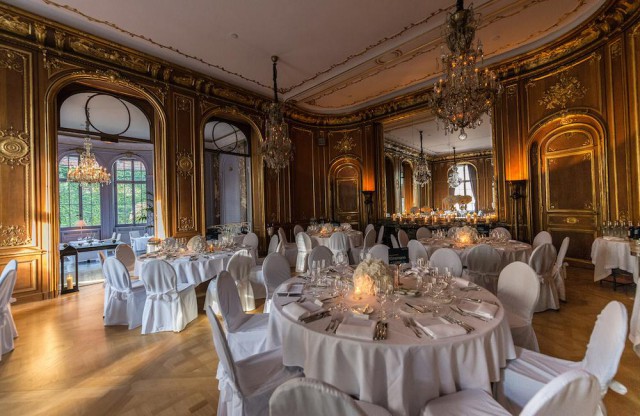 In an old Bus

This is actually my personal favorite place on this list: The old bus of the Cafe Pförtner in front of the Uferhallen in Wedding. A truly original place for a unique dinner.

This one is actually a bit outside of Berlin and is closed right now because of the winter cold. But this little island is so unique that I wanted to include it anyway. They have their first open day this year at Easter with coffee and cake and an Easter Egg Hunt. The regular season opening is in the end of April 2016. 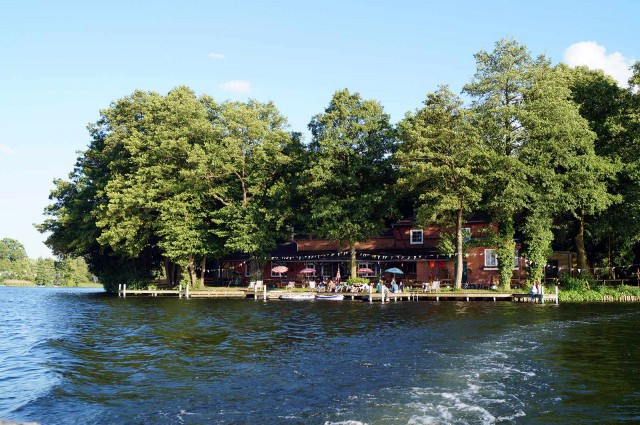 To bring you the coziness of a ski vacation right into the flatland of Berlin, the Swissotel has a real gondola from the Swiss Alps on top of their terrace, where you can enjoy mulled wine and cheese fondue. It’s open only in the winter months. 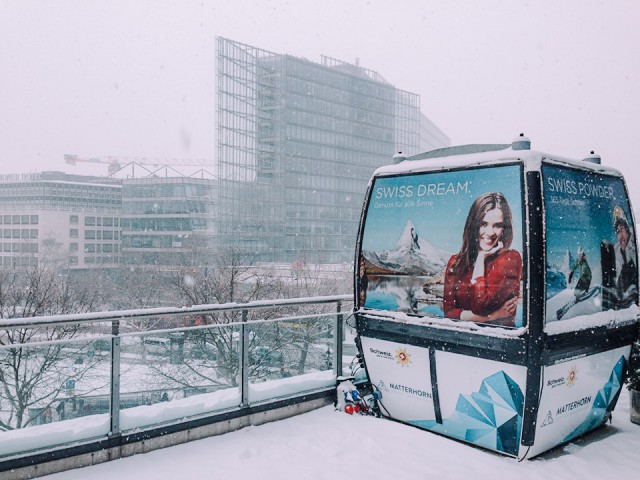 In an old Pharmacy

This cafe and restaurant embedded itself into an old pharmacy and kept most of the charming interior with the shelves and medicinal jars. A really charming and unique ambiance.

So these are all the places in Berlin that we think really stand out in terms of their unusual location. Do you know of any others that we should mention here? Let us know in the comments below.