A Guide to English-Language Cinema in Berlin 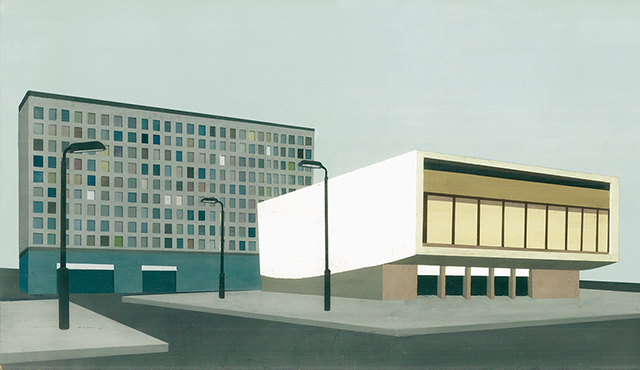 I LOVE going to the movies. I love seeing visual art and storytelling on the big screen, hearing sound through big speakers, my senses encapsulated. I love the architecture and physical space of going to the movies, entering from city streets into a particular lobby and then into the seats of an auditorium. I love the social aspect of congregating in a dark, silent room with others to pay attention to something important. Yes, I enjoy watching movies at home, but there’s something about a formal start time, a public event, a demand for reverence without distractions that only the cinema provides.

When I moved to Berlin from New York, I was worried how hard it might be to enjoy going to the movies. One of the best things about New York is its unabashed love for film, and the many wonderful theaters that celebrate quality cinema. The German-speaking world is such a big market — and most people are so subtitle-averse — that American films are generally dubbed over in German for theatrical release. If your German is still as bad as mine, this can be a serious problem!

Fortunately, Berlin’s international community of culture lovers has ensured that we can all enjoy films in their original from, unspoiled by ghastly dubbing. And the selection of awesome, interesting theaters easily rivals New York or Los Angeles or any other cultural capital. The Yorck Kinogruppe leads the way with a very impressive collection of theaters, dedicated to non-dubbed film versions. These and many other independent theaters screen international films with German subtitles (OmU — Original mit Untertitel), sometimes without subtitles (OV — Original Version) and even occasionally with English subtitles (OmUeng or OmeU). Your choice of venue is not at all limited to the huge, corporate Sony CineStar at Postdamer Platz — in fact, this is the worst place to go!

There’s no need to worry — Berlin is indeed a cultural capital for cineastes. Here is a breakdown of where to watch the best in cinema throughout the city. Two things to know about all of these: you can sit wherever you want (unlike many European theaters, which assign seating), so come a bit early for the perfect seat, and unfortunately for some of us expats, there’s no buttered popcorn anywhere in the city :/ But at least you can always drink!

Note that most movie theaters in our list offer a program that includes a mix of German dubbed, subtitled original and original version without subtitles, so you always need to pay close attention to the codes behind the movie names in the program (OV, OmU, OmeU, etc.).

The 11 Best Movie Theaters for English-Speakers

This place is beautiful. It’s a palace. It elevates the experience to that of fine art. This is part of the Yorck Kinogruppe — its crowning jewel, really. It usually shows the ‘biggest’ film of the moment. It’s central. The seats are comfortable. The building is simply exquisite. Is there anything more romantic? 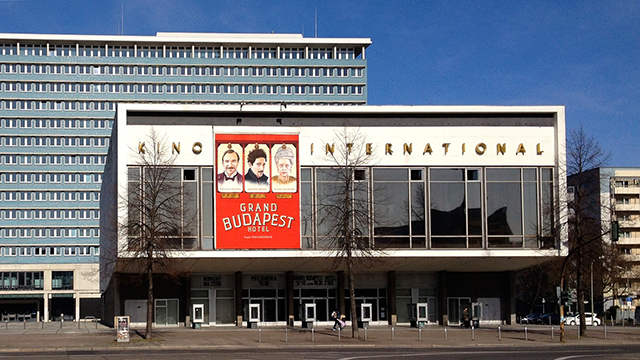 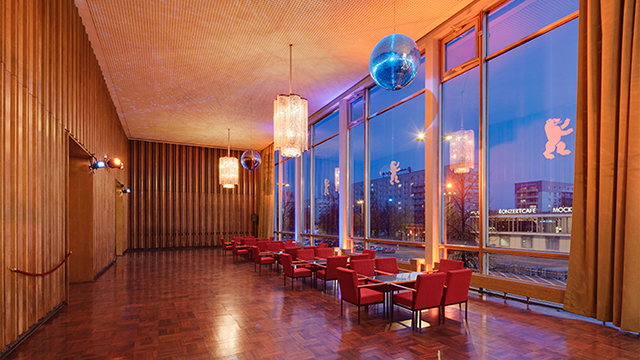 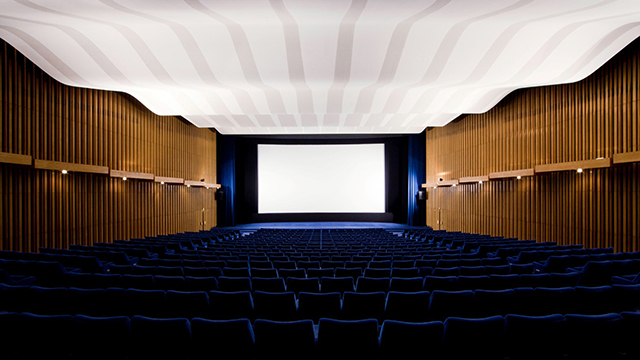 You might miss this theater if you’re not looking straight at it — it’s built into a nondescript apartment building. Inside is a stylish fifties ambiance and lovely auditorium — the place has as great feel to it. It’s likely showing the coolest movie of the moment, and the nightlife of Neukölln is just a stroll away. It’s a rather magical place. 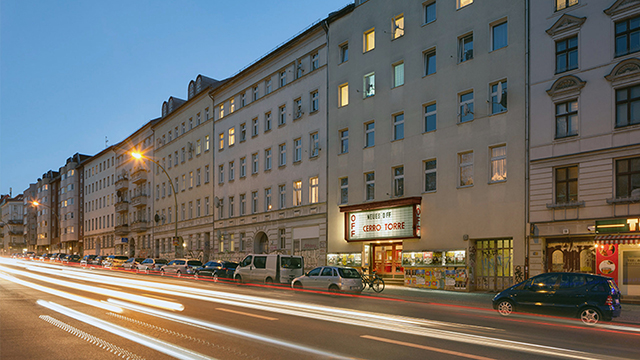 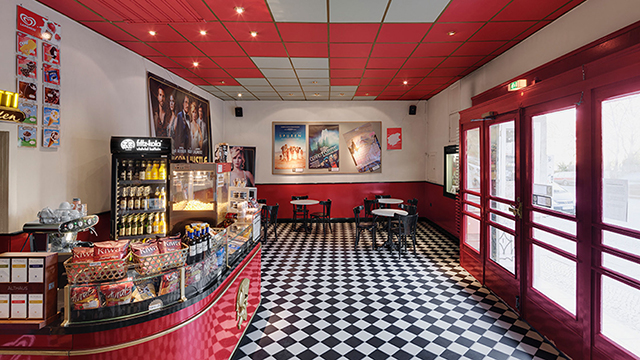 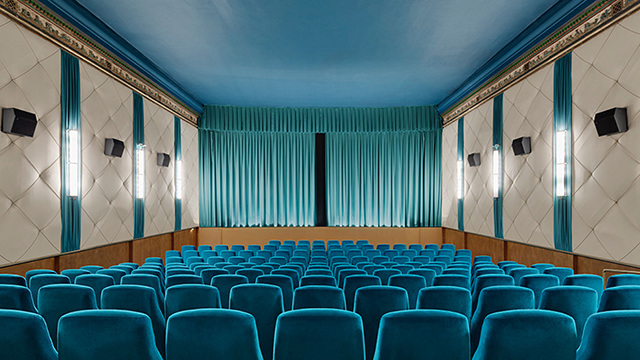 From outside, this just looks like a charming little theater with a modest vintage facade. But through the classical foyer inside is a grand, amazing auditorium with a huge screen, perfect for spectacle. The cinema also has a rich history — it’s a true pioneer of Original Version culture. It’s worth the trip to Schöneberg. 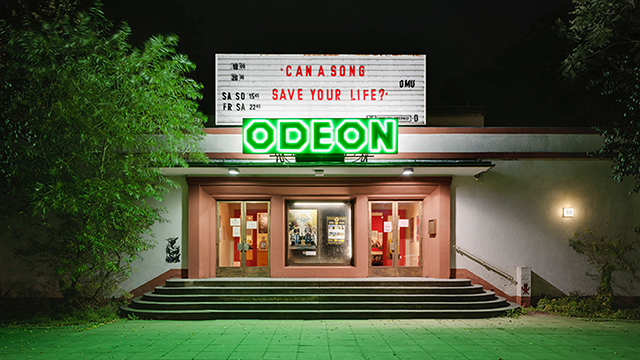 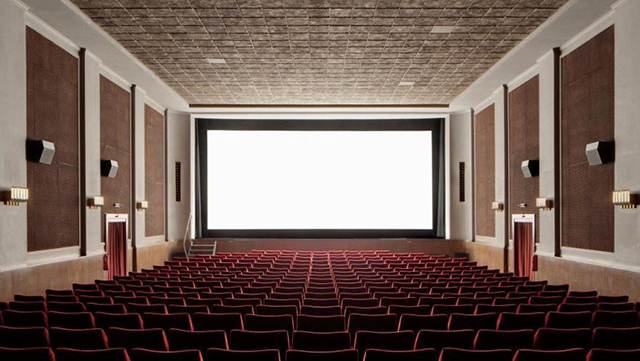 The ‘FaF’ is one of the largest art house cinemas in Berlin. The building is stately and beautiful, nestled into a quiet neighborhood on the eastern border of Prenzlauer Berg. Not all the screens are large and immersive, but I’ve never had bad luck – they tend to put the exciting American films in the bigger rooms. The film schedule is reliable and the setting is wonderful, especially in the warm months, when the adjacent beer hall is open. Also, the vibrant Volkspark Friedrichshain is right across the street. 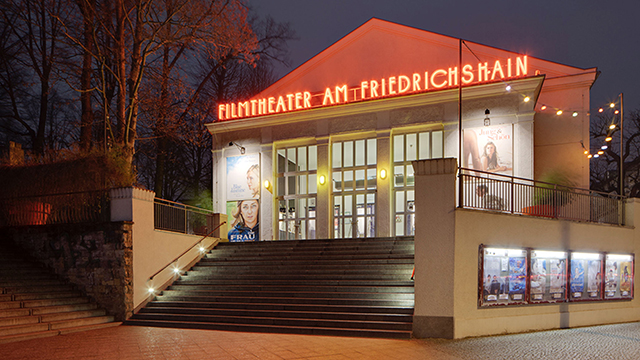 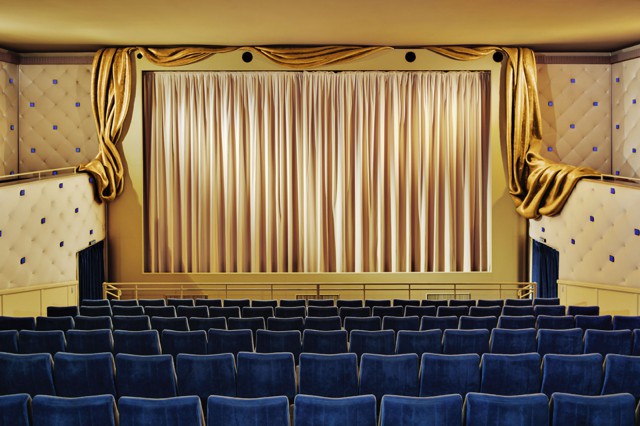 The location is terrific, the energy is lively and the program is solid. They play many foreign films in languages other than English, which is tricky without English subtitles. It has two auditoriums: one is decent-sized with a pretty nice screen; the other is a bit cramped. Still, lots of good stuff is going for this place — it’s a genuine neighborhood cinema with lots of character. 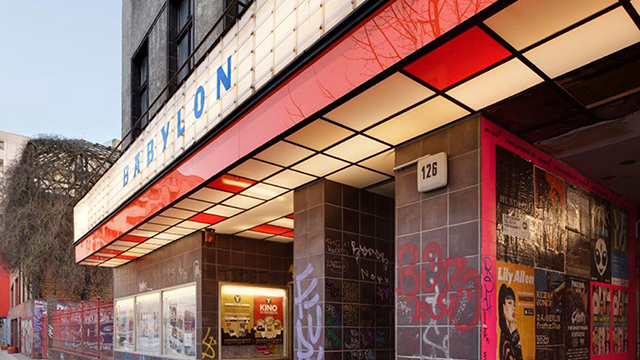 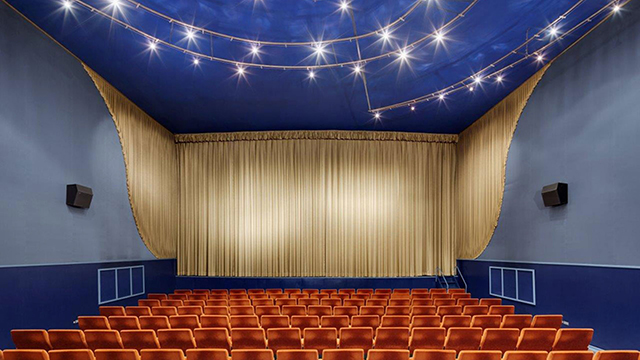 Wow, this is the first non-Yorck Kinogruppe cinema on the list! It part of Europa Cinemas, a global network of theaters. It has a very reliable program off OmU films mixed in with its German fare. The setting of Hackesche Höfe is very posh, which can add to the pleasure of an outing. The theater itself is hidden up a staircase through the courtyard. Because there are five screens, you might end up in a small auditorium, which can be unfortunate. The rooms feel clean and straightforward, maybe a bit boring, but comfy.

This theater always shows up on this helpful guide to the week in English-friendly cinema. 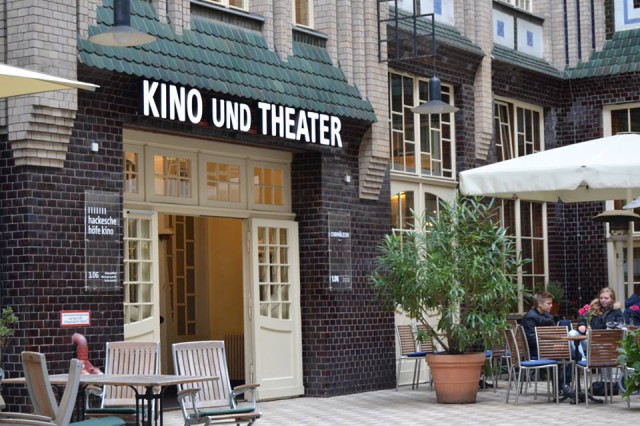 Café Cinema sits directly between Hackesche Höfe Kino and Kino Central, which feels decidedly less fancy. Its charm lies in a fiercely indie spirit, a grunge aesthetic leading to its small doors through a winding, graffiti-filled courtyard. It’s another small, special place that believes in the OmU experience. 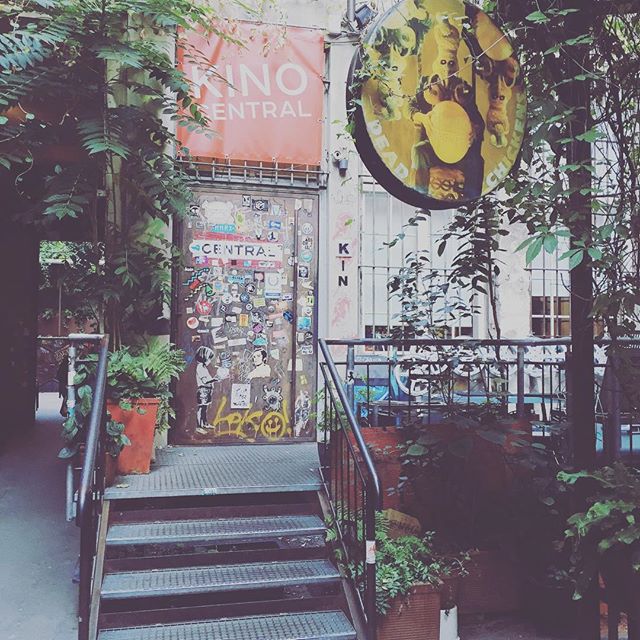 This is the most reliable place in Berlin for American film. Sometimes it’s the only alternative to the CineStar multiplex. Movies tend to have extended runs here, so in case you’re late to see something, it’s probably still playing here. The setting is a bit strange; it’s oddly tucked way behind a funny mall, and some of the auditoriums are quite small, so it’s not the most luxurious place to go. But it’s not without its charms and it certainly does the trick. 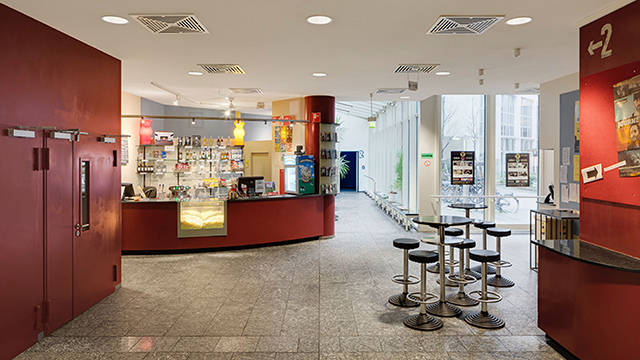 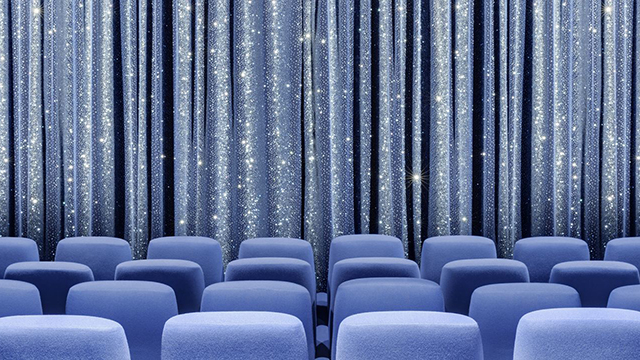 “Cinema” is written above the understated doorway. On the outside wall to the left it says “This is not.” B-ware! Kinoladen (cinema store) is a fiercely independent art house. It’s a bar & café, it’s a video library, and it shows small, independent film in its makeshift screening rooms full of couches. It is perhaps the most quintessentially Berlin movie theater because it is so unique and eclectic. There are others like it throughout the city (some in the honorable mentions below), but this one has the most diverse, English-friendly screening program. The prices are also a bargain. 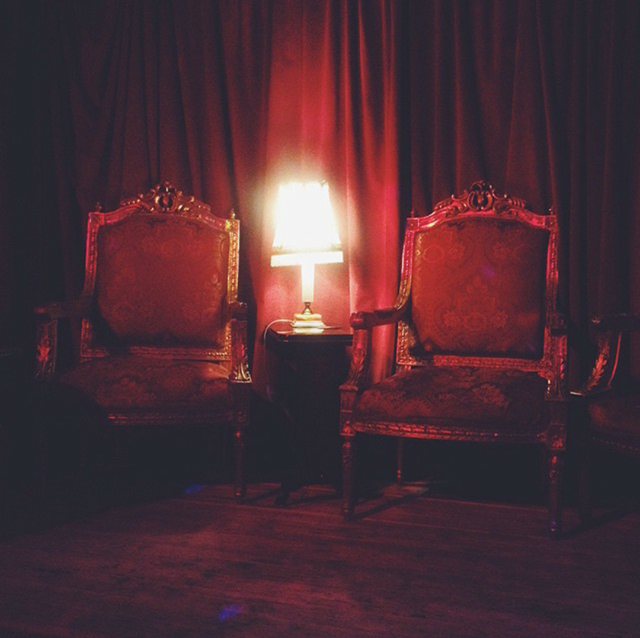 Not to be confused with the Babylon Kreuzberg, this classic independent cinema specializes in revival programs and retrospectives. It’s an old theater from the 1920s; the seats are a bit uncomfortable and the other auditoriums are very small, an outside walk from the main section. Still, given its ambitious programming and indie cred, along with its great location, this is an important place to check out. 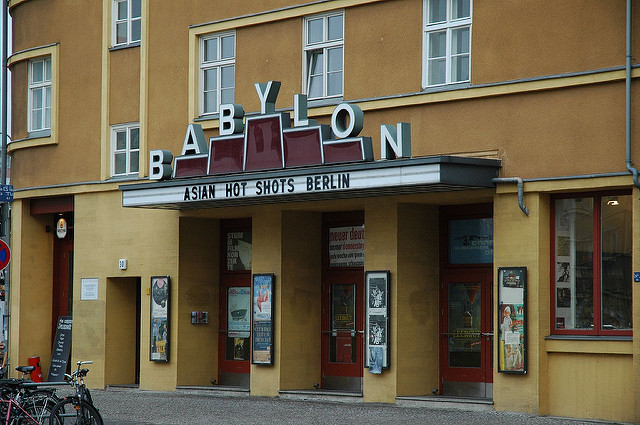 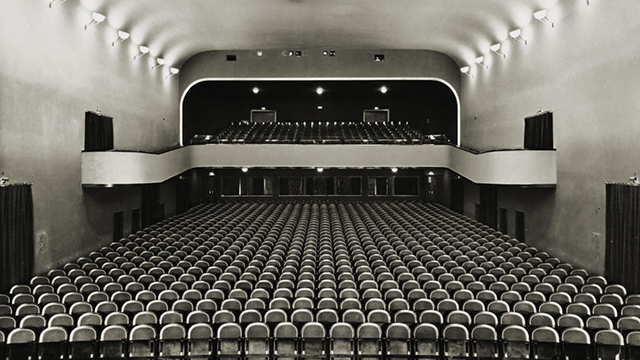 The new IL Kino in Kreuzkölln deserves a mention here because it is perhaps the only place to reliably see a foreign film with English subtitles. This chic little screening room behind an Italian cafe regularly screens films OmeU, making it invaluable to the English-speaking film nerds of Berlin. 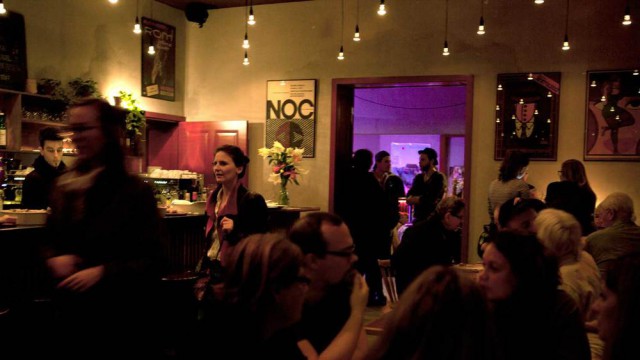 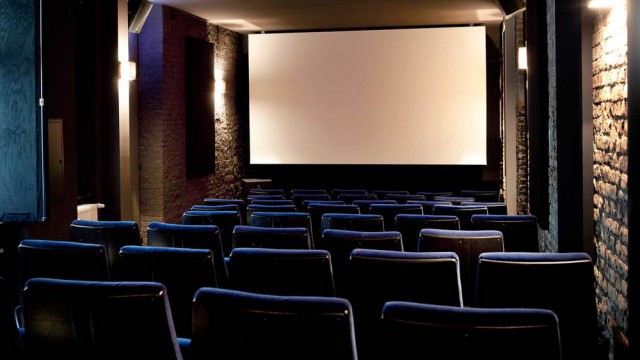 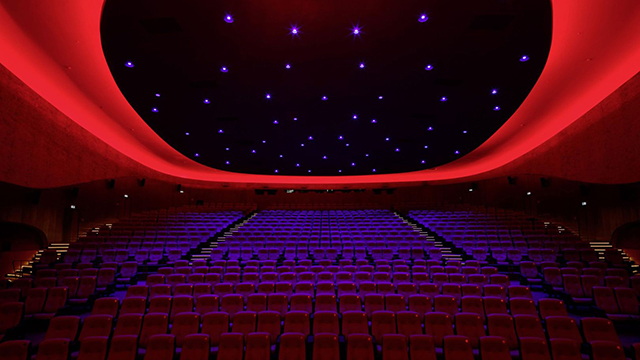 Zoo Palast – The grandest cinema in Berlin (perhaps tied with Kino International) just doesn’t show English films in its epic main theater enough to make the list. But occasionally it does, and when that happens, make sure to get there!

Moviemento Kino – A cool theater with a diverse program on Kottbusser Dam in Kreuzkölln.

Passage Kino – Another Yorck cinema, this is a lovely, ornate place to go. Their OmU schedule isn’t very reliable, but it’s much worth checking out.

Kant Kino – This is Yorck Kinogruppe’s westernmost theater. The vintage Charlottenberg cinema has five auditoriums with an English-friendly film usually playing in at least one of them.

fsk Kino – A very nice cinema at Oranienplatz that occasionally plays a film in English.

Lichtblick Kino – This is a small art house on Kastanienalle that plays some new foreign films and many classics.

Tilsiter Lichtspiele – A large screening room with couches in the back of a local bar, between Frankfurter Tor and Volkspark Friedrichshain.

Sputnik Kino – On the fifth floor of a courtyard building near Hasenheide, this is a unique cinema with a view of the city through its lobby windows. Its two screening rooms are small but pleasant.

Arsenal – For the truly adventurous, check out the program of underground cinema and video art at this lofty Berlinale affiliate.

Sony CineStar – Okay, fine: for your big American blockbusters on an IMAX screen, the Potsdamer Platz institution might be worth the trip.

Have we overlooked anything? Please let us know in the comments 🙂