The Most Amazing Moments of 2016

For me 2016 was actually a great year, even though I almost don’t dare saying it out loud. A lot of sad and terrible things happened in 2016, yes, but there still was a lot of good stuff that I think needs some more attention: Small and big moments in Berlin that showed what a great city this is and what amazing people live here. We should focus more on these things, at least for a moment, and take these positive memories and feelings with us into the new year.

Here are the most happy moments and amazing happenings of 2016 in photos and videos.

Fashion designer Esther Perbandt has always tried to blur the lines between creative disciplines when she presents her collections. In January she blew our minds with a stunning contemporary dance performance at Radialsysteme V by Sasha Waltz & Guests. On January 17, 2017, Esther will have yet another spectacular show, this time at the biggest theater of Berlin, the Volksbühne.

The refugee crisis was at a peak in the media in the end of 2015 and the beginning of 2016. The attention was mostly on those who arrived somewhere in Europe seeking shelter. Ai Weiwei decided to commemorate those who did not make it, but who got lost at sea with his installation made of life vests on the Konzerthaus at Gendarmenmarkt. 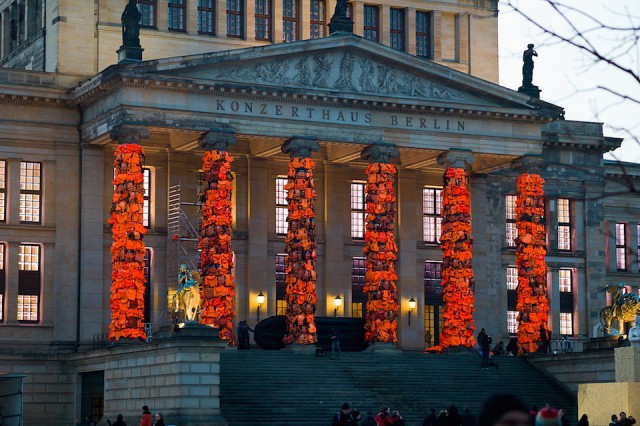 Another highlight in February was an impressive laser and sound installation by Christopher Bauder and Robert Henke shown at Kraftwerk Berlin as part of the CTM Festival 2016. Deep Web is a moving, luminous architectural structure that weaves 175 motorized spheres and 12 high power laser systems into a 25 meter wide and 10 meter high sculpture of light and sound. It was a really immersive experience to see it.

What better way to celebrate the beginning of Spring than a huge installation by flower artist Rebecca Louise Law. In the end of March she set-up an impressive hanging garden full of beautiful flowers at the Bikini Berlin concept shopping mall. On a personal note, I got married that month… 😉

In celebration of its 20th anniversary, German record label raster-noton presented a ‘white circle’, an acoustic-architectural space designed as an audiovisual installation inside the hall of Berghain. On this occasion four of the label’s musician were invited to develop and contribute an exclusive composition: Alva Noto, Byetone, Frank Bretschneider, and Kangding Ray. Check out the 360° interactive video below.

The announcement of the construction of the world’s first Street Art Museum and Archive in Berlin was a major surprise in May. Urban Nation, the organization behind it, has already changed the face of the city a lot in recent years with their huge commissioned mural – the museum is new the next logical step. It’s scheduled to open sometime in 2017.

The shooting in the Pulse Nightclub in Orlando can certainly not be called a highlight of 2016. But what this event caused was truly beautiful: Worldwide signs of solidarity with the LGBTQI community, also here in Berlin at a commemoration event at Brandenburger Tor.

Blogfabrik, the amazing content creator space and network that we are lucky to be a part of turned one in July and that was of course a reason to throw a big party! 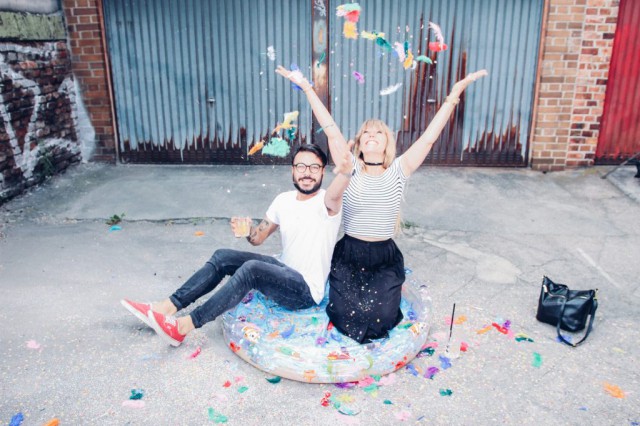 The revelation of the Meat mural designed by Marcus Haas and sprayed by art group Xi-Design at Bernauer Straße turned out to be quite the sensation. The shocking image shows a piece of raw meat with the shapes of Berlin’s districts in the pattern of the flesh and a big knife with the dates of the Berlin Wall slicing off a piece. The location next to the Berlin Wall memorial is of course no coincident. Even though it was announced that the mural would only be there for 3 months it appears to be still in its place.

Anne Imhof’s mysterious performance piece Angst II that happened at Hamburger Bahnhof in September became a major hit in Berlin. The format as an ongoing performance in the evenings with free entrance was quite innovative and this proved to be a magnet for curious people and art lovers alike.

The Festival of Lights is still one of the most spectacular and fun happenings in Berlin that brings so many different people together in the streets.

Another happy moment in 2016 was when I heard the song “Das ist Berlin” from Endlich August for the first time. It is the most poignant and beautiful Berlin song that I have heard and I honestly had tears in my eyes listening to it.

December was a month that really put everyone’s good faith to the test. It was like a lot of things came together trying bring everyone down. But than something beautiful happened, a demonstration of love opposing the dreadful right wing populist movement. It was great to see so many more people of Berlin showing up as a united front against the hate. It was the best way to finish a difficult year.

And what were your highlights, amazing events and happy moments in 2016? Let’s have more of those in 2017, shall we?