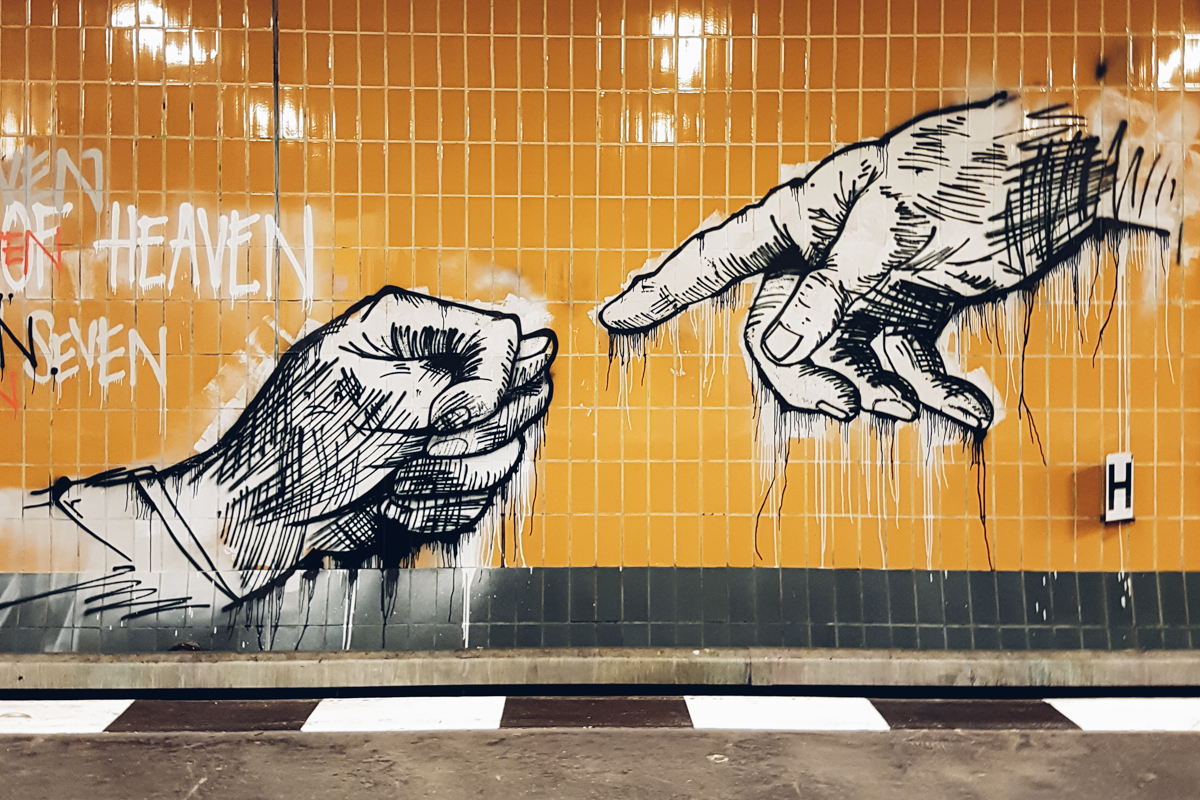 Whenever a cool graffiti turns up over night inside the subway stations of the Berliner U-Bahn or even on their trains the artwork has a relatively short life because the BVG will probably remove it soon. Of course they see it as an act of vandalism on their property, even though they might recognize some of the graffitis as quite artistic, it’s still a disruption of their daily business that they need to remove. It’s a shame really, in some cases especially, because these pieces will catch the attention of so many passengers and will distract them from their daily routine of commuting, even make them think about the messages incorporated into the graffitis, just like art should: make people think about it. In the end it’s also just a nice change from all the bill boards. 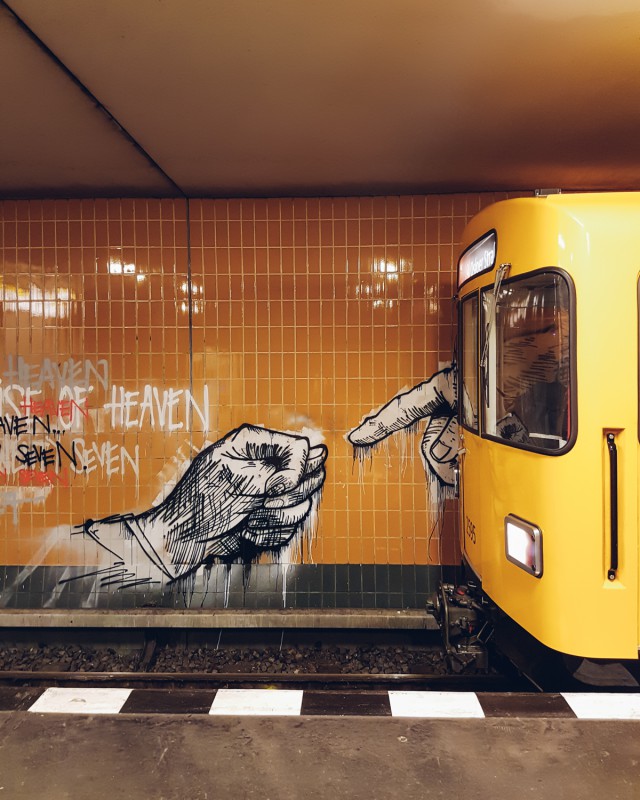 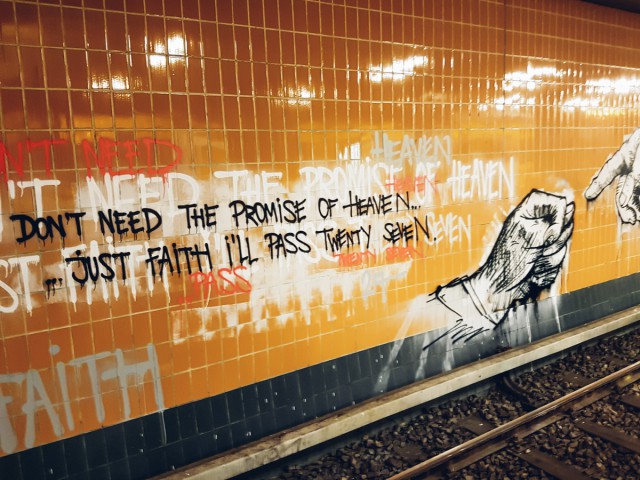 The new piece that popped up last night in one of Berlin’s subway stations in Charlottenburg definitely has a message to think about: “Don’t need the promise of heaven, just faith I’ll pass twenty seven.” Next to these words a variation of a detail from Michelangelo’s fresco painting “The Creation of Adam” from the Sistine Chapel’s ceiling. The famous detail of the hands reaching out to each other is quite iconic – here in the graffiti the hand of Adam is not reaching out to the hand of god like in Michelangelo’ version, but instead makes a fig sign gesture, which is considered a symbol of good luck. Combined with the words next to the hands it probably means “good luck that I will survive 27” which is a critical year for artists as many of them such as Amy Winehouse, Jimi Hendrix, Janis Joplin, Curt Cobain, and most recently actor Anton Yelchin died at this age (see club 27). 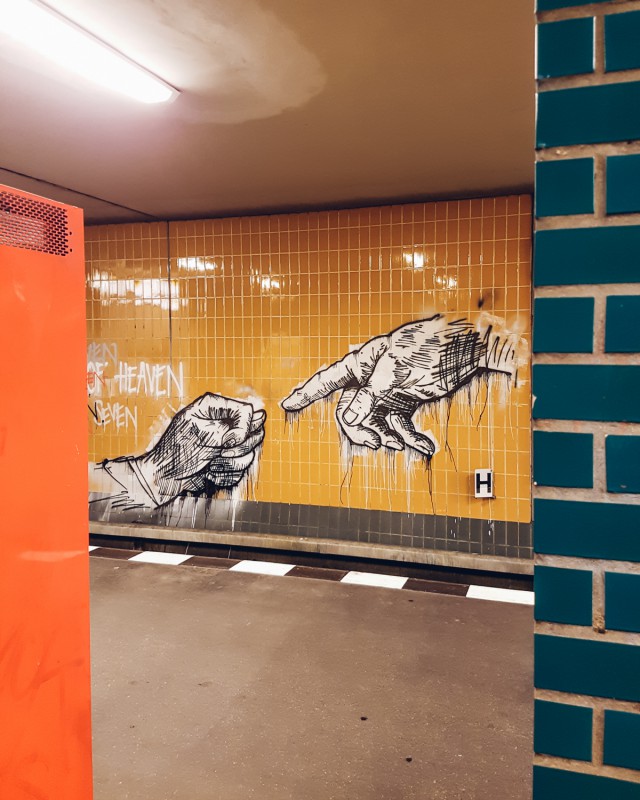 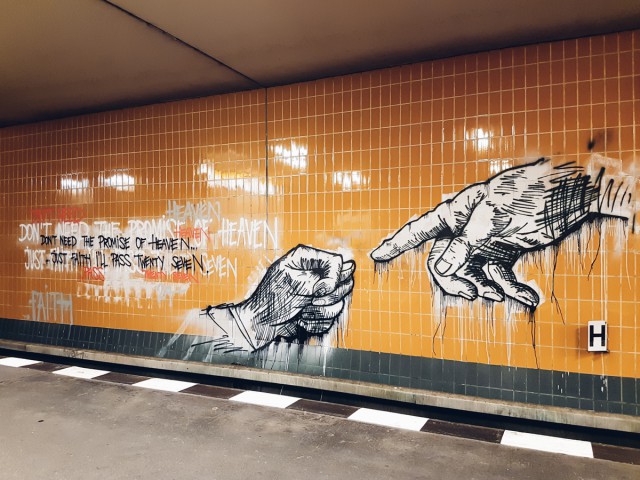 Who is responsible for this awesome new graffiti? Not clear, but my guess is the art collective Rocco and his brothers who also did the hidden bedroom in the subway tunnel staircase and the surveillance intervention piece inside a subway train. Why, because they posted a photo on their Facebook, but without further comment other than an Amen. Obviously they didn’t state where this is, the station’s name can not be seen and it’s not one of those easily recognizable ones. But with a little bit of research about subway tiles I could find it and it was still there a day later. But before I tell you, I want to know if you guys can recognize the station? Let me know your guesses in the comments below!