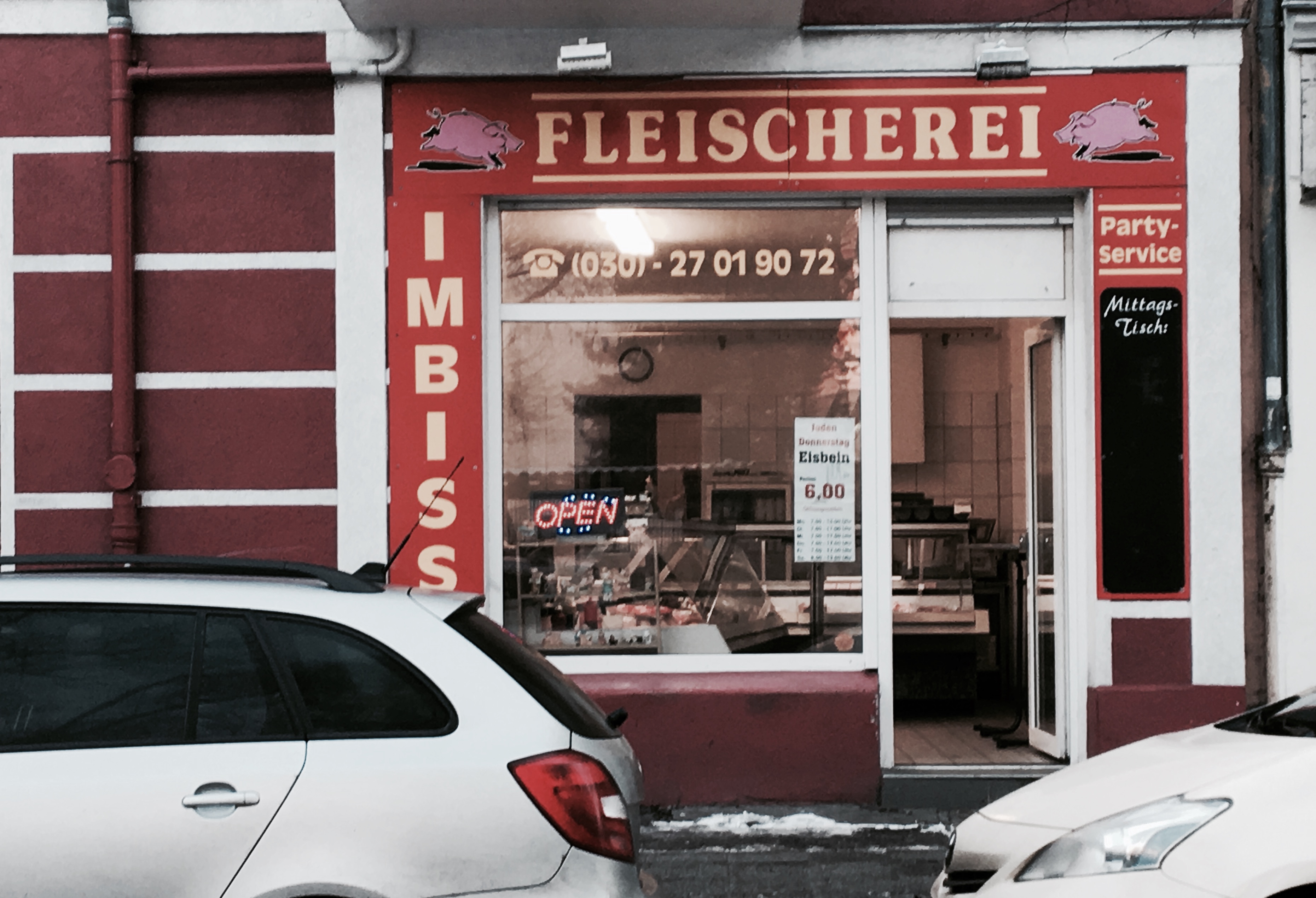 I’d landed on my feet and hit the ground running. I knew people. My pockets were lined with the contacts of DJs, photographers, film makers and the owners of bars. Before I had even arrived in Berlin I was told that Neukölln was the place to be; and here I was right in the thick of it. Purposefully unpainted, candlelit bars selling mezcal from Oaxaca, trendy vegan cafes which serve coffee in bowls, makeshift pop up galleries, neo-vintage clothes stores with humanitarian ideologies and hipster beards galore, it’s an orgy of artists and underground musicians not wanting to make the mainstream. Weserstraße operates as one of the main arteries. When I told people was staying there they looked at me differently. They were impressed and I must admit, I was pretty chuffed. One day I was aimlessly exploring Weserstraße and its adjacent side streets and was intrigued by the multitude of places I would probably never go to. I was getting a bit peckish. I could’ve easily grabbed a falafel but that would’ve been too obvious. And then, on the corner of Treptower Straße, a little bit away from the bustling nucleus of bars, I was struck by a butcher’s shop which isn’t aware of the metamorphosis taking place around it. Unaltered from the day it opened, it stands there defiantly giving the middle finger to change. I had to go in. 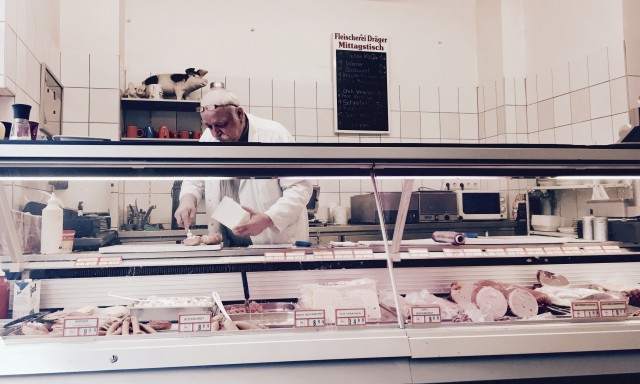 Outside there is a lonesome, generically produced metal table with a ‘private’ sticker on it and a rain-soaked, half smoked cigarette resting in an overflowing ashtray. A display of dusty pig models in the window. I go inside and there is a stale lingering aroma. It could do with a fresh lick paint. An empty calendar hangs on the wall. I see a construction worker eating raw meat and bread.

„Mettbrötchen” He responds with his mouth half full.

„Bitte?” Not catching what he said.

„Mettbrötchen” he repeats, in a slightly more forceful and direct tone.

„Mettbrötchen” I echo, making sure I’ve got it right. 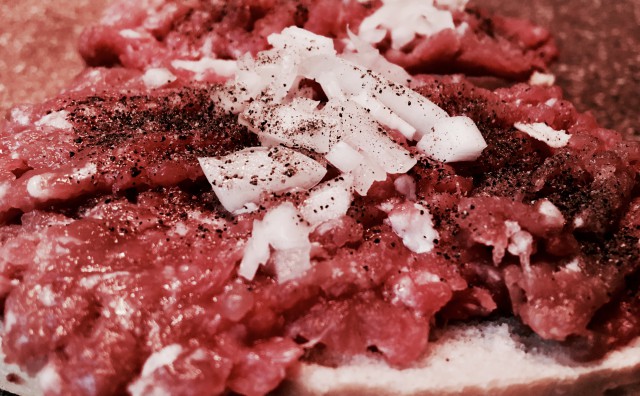 At this point the owner appears from the back in his faded, unwashed butchers coat, grey, nicotine stained moustache and chubby fingers. He looks at me with pure indifference. I’m staring at the somewhat unappetising but clean and neatly arranged selection of meats.

‘Cheese’, ‘Cheese with Herbs’. A menu on the wall of ‘Fleisch Platters’ which wouldn’t look out of place at an all-inclusive holiday resort in Benidorm. I’m clearly not a regular. I’m a little out of place and failing miserably as I try to hide the trauma of having to order something in a foreign country when one is yet to speak the lingo. Most people in Berlin speak English. This guy doesn’t. He wouldn’t even want to and why should he? I can feel him getting impatient. I decide to go for the metbroetchen. He doesn’t say a word and starts to prepare the bread with raw mince-meat, raw onion, a sprinkling of salt and a dash of pepper. No nonsense. ‘Does exactly what it says on the tin’.

Here you go. Now fuck off! He doesn’t actually say this but I know he’s thinking it.

It costs a Euro. I check for coins and only have 70 cents. To a regular this wouldn’t be a problem, he’d clearly just let them pay the next time. But this is my first Mettbrötchen. I’m not from round here. My German is shit. He couldn’t care less if I come back. I look in my wallet and see I’ve only got a crisp fifty Euro note. I pull it out and look at him apologetically:

He takes it with clear disdain, gives me the change and then walks away thanking me and wishing me well but not meaning a word. I leave the shop. It’s a Thursday afternoon in early December with only a few leaves left on the trees. It’s not even 4pm but it’s already starting to get dark. It’s zero degrees but apparently feels like minus 3 according to my smart phone. It’s ever so slightly raining but enough to make me pull an overly uncomfortable face. I take my first bite of ‘Mauer Marmalade’ and I’m comforted by the simplicity and charming harmony of the basic ingredients which work together like a reliable three chord progression. It’s not pretending to be something it’s not and neither is the Butcher. The Butchers shop is a union. The workers are loyal to him. They go there every day. Their trust is earned. I would have to go back a thousand times before the butcher would even care to recognise me. I wonder how many times I could go back. As I take my second bite I’m walking past another vegan café where they sell crepes and burgers with the names of famous rock stars. I look up to see what it’s called.

Christopher Montgomery was born in the UK and is currently doing a masters in English Studies in Berlin. When he is not working as an English teacher, he is exploring Berlin or doing some creative writing. Although his inspirations and experiences could be found in his music and photography as well.