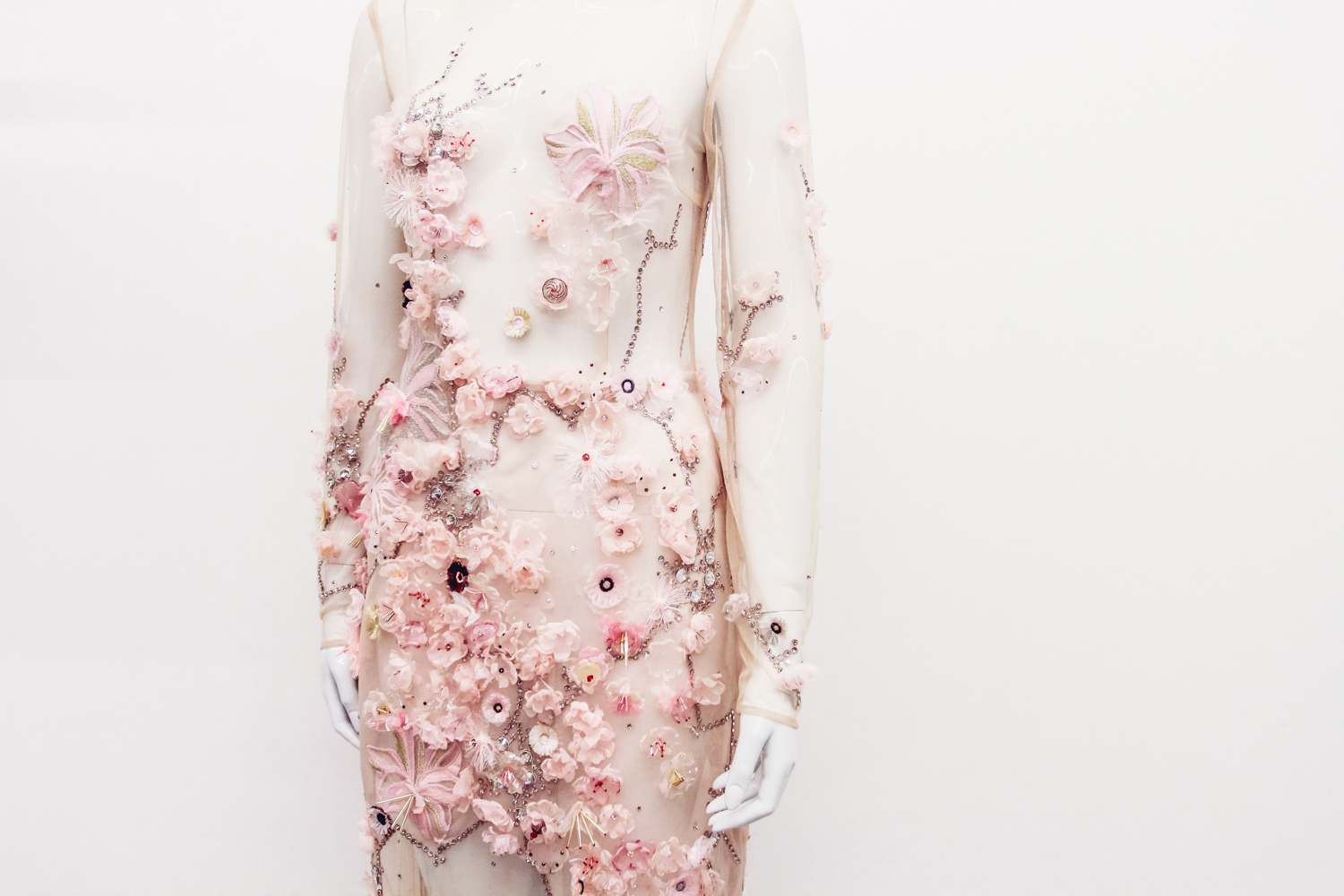 Innovation in fashion has always been a designer’s pursuit; mixing the primitive purpose of clothing with new materials and techniques, to combine functionality with unique design. On the outset of this Berlin Fashion Week, concept shopping mall Bikini Berlin opened its doors to an innovative exhibition by ElektroCouture,  the Berlin-based fashion technology powerhouse, representing the future of self-expression and style.

ElektroCouture, a leading institution in fashion technology, works with companies in both consulting them, as well as offering active technological support to designers to realize their visions. Natasha from ElektroCouture was there to explain to us all that we were seeing: 15 elaborate fashion concepts, each of which incorporated technology – from glow in the dark designs, to 3D printed materials, the creations were  all astonishing and inspired. 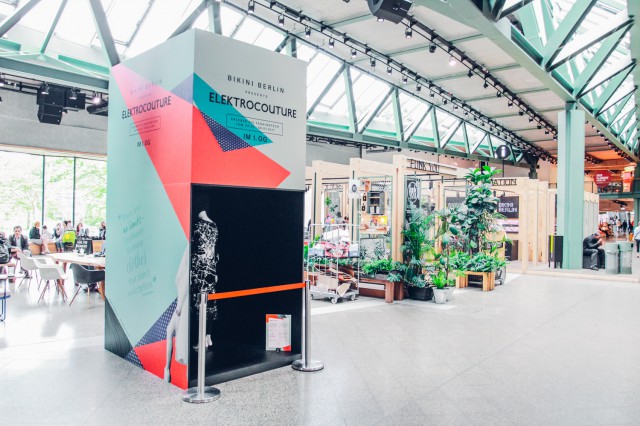 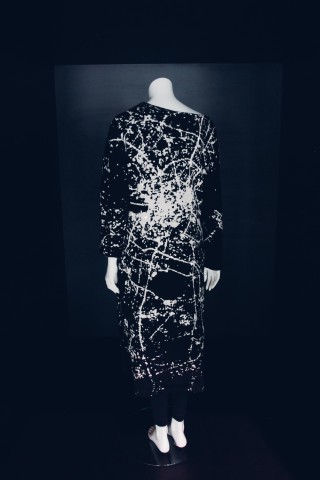 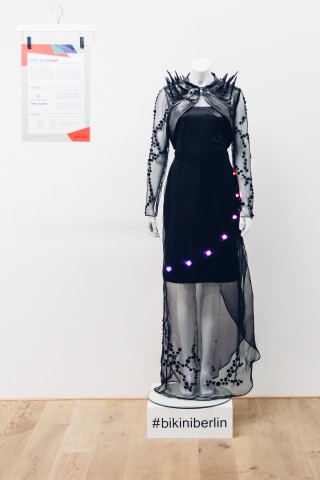 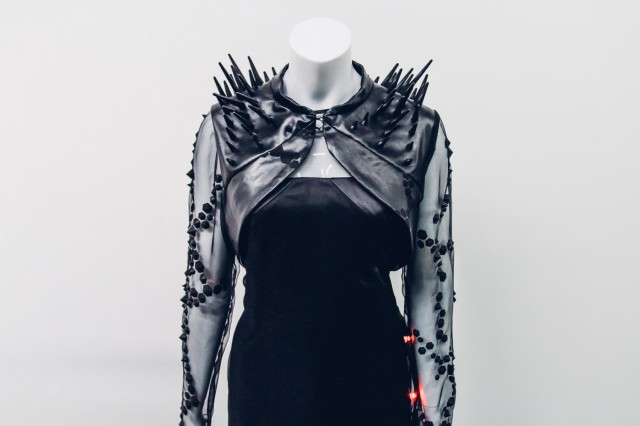 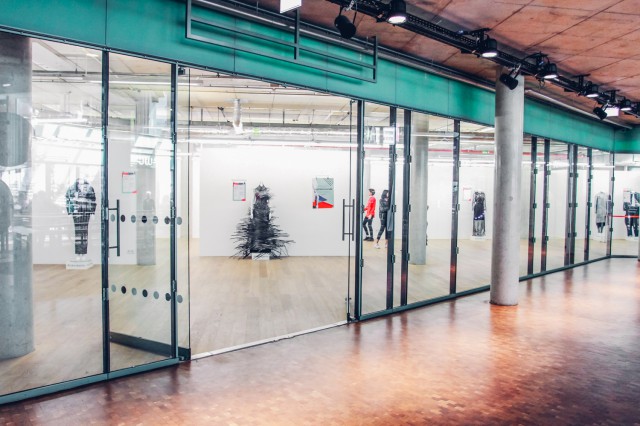 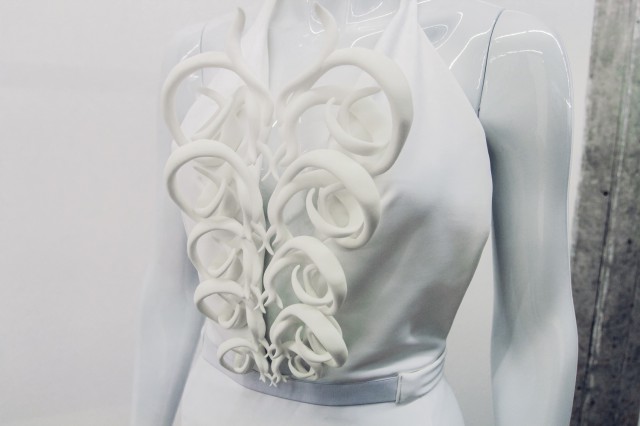 One of the designs that impressed us the most were Leipzig-based designer Laura Krettek’s cement jacket and plastic dress – more like wearable art objects than clothes, they were developed by materials of architecture that were then transformed into textile-like materials. Natasha told us how the elaborate cement jacket was created, by having iron filings inserted in it, and then creating all the shapes with a magnet. SO cool! 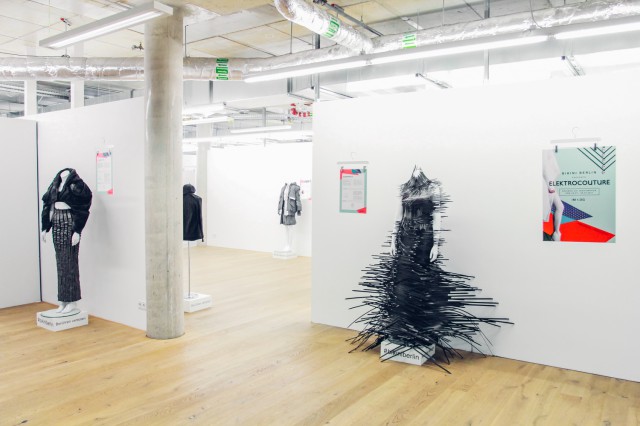 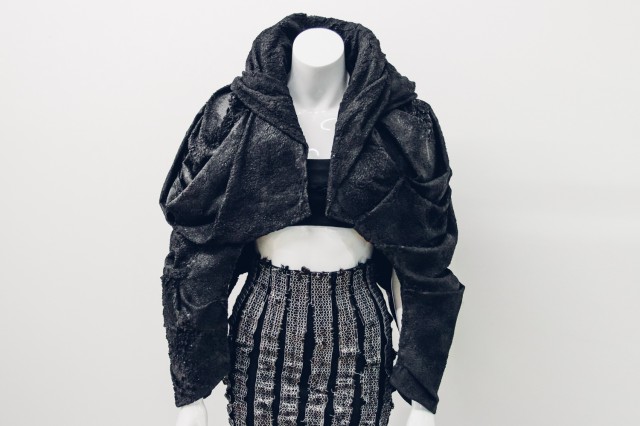 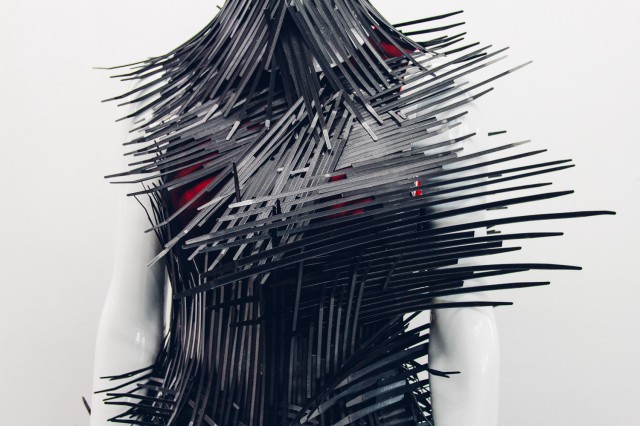 Joanna Hir came up with Vision Quest, a project which consists of four designs with elements of techwear for men. It was inspired by the Enlightenment in its basis, which is symbolized by the actual existence of light on each creation (either glowing ink, EL wire, EL panel or LED Matrix). Among the designs there is a hat connecting to one’s ears, that actually changes color according to the wearer’s stress levels. Wow!

Another dashing design is Anja Dragan’s “Marlene Dress”, which takes Marlene Dietrich’s dream, expressed in letters to the designer Jean Louis in 1958, of a dress that would glow and be interactive. Due to technological restraints, her dream was never realized; however now, sixty years later, ElectroCouture made it true! 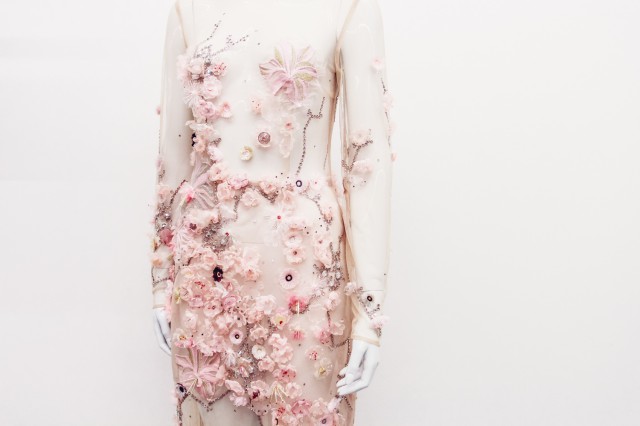 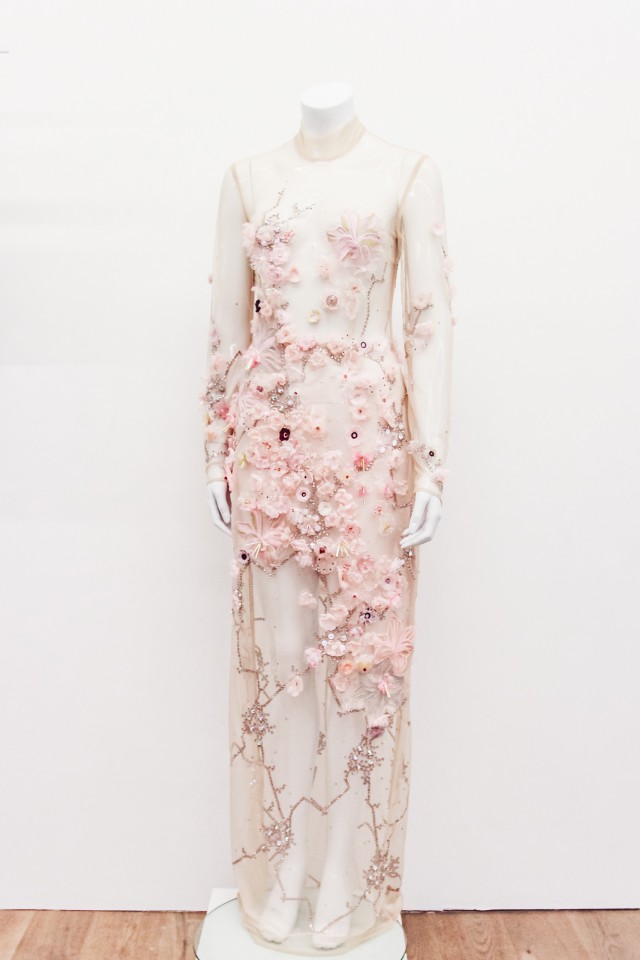 We had the luck to visit at a time when three of the designers were also in the space, and thus hear about their project from them: Young Issaree Duangkae from Thailand designed the BAI MAI bag, with a vision to have us bored of our bag never again! It’s a NEOpixel bag made from LED screen, that allows you to change your bag pattern in 4 different modes by just pushing one button. 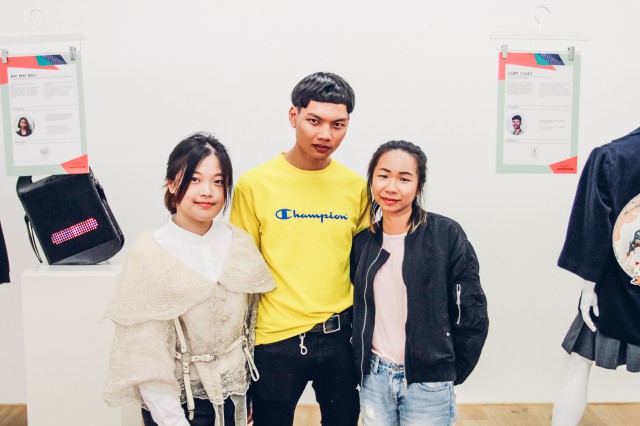 We also spoke with Nuttakat Khunkhong, designer of the “LGBT coat”, which tells a story about the third gender discrimination in his country, Thailand. He uses Henry Joseph Darger’s painting about a world torn apart by war, and satirically portrays the masked judgement of Thai society. 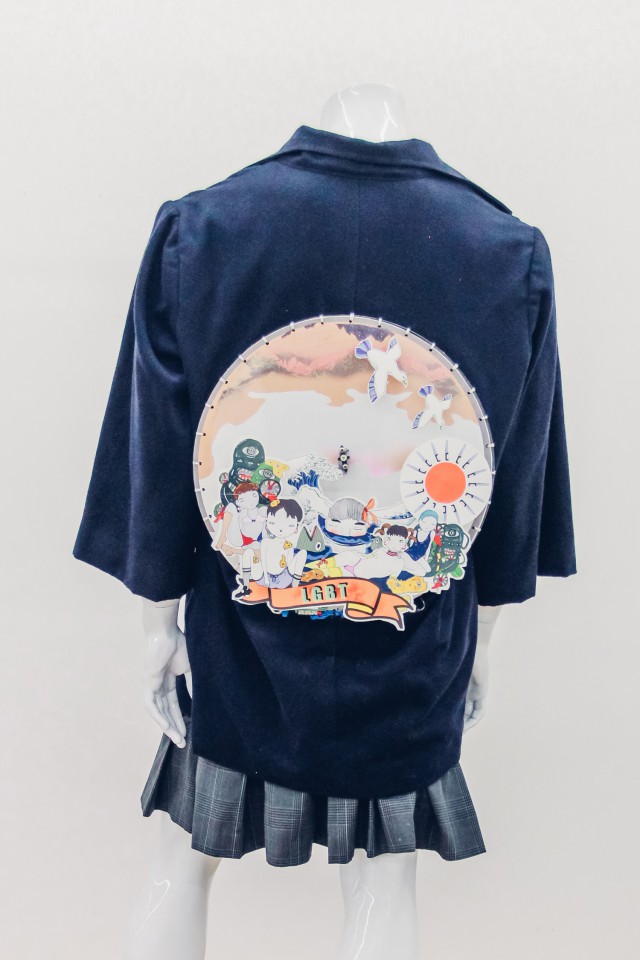 Finally, a truly touching project, UNIVERSOLE, was designed by Nicole Lao Ong from Philippines. What inspired her design were less fortunate children in her country, who only get to have one pair of shoes, usually bigger in size, as they grow up. Universole is adaptable, extending up to 4 sizes in length, and made by sustainable, affordable materials, offering a chance of proper shoes to poor children. 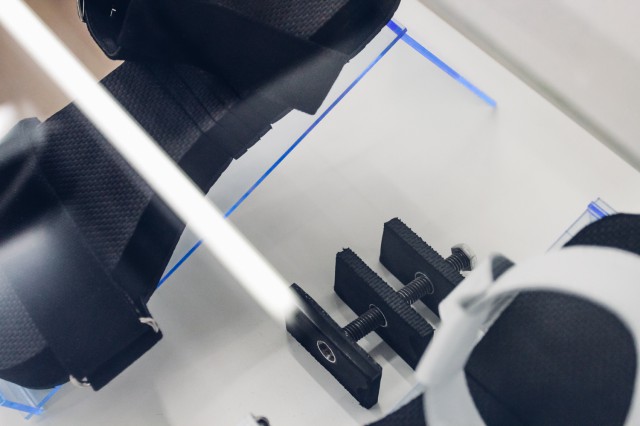 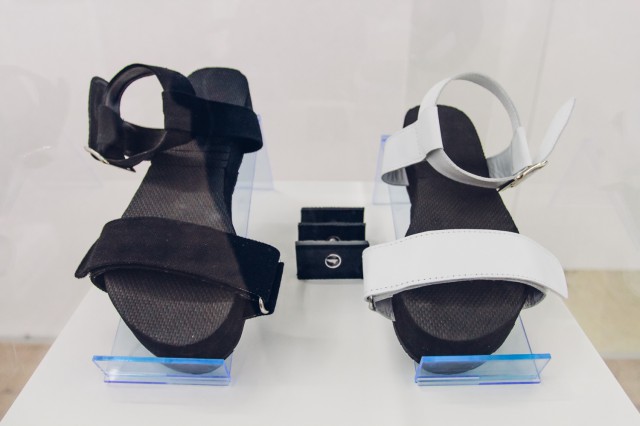 The exhibition will run until July the 8th 2017 (the end of Fashion Week) and the admission is free-showing, thus, how innovative projects can be accessible.

Thanks to the support of Bikini Berlin!