Let’s Face It: Berlin Can Be Quite Ridiculous 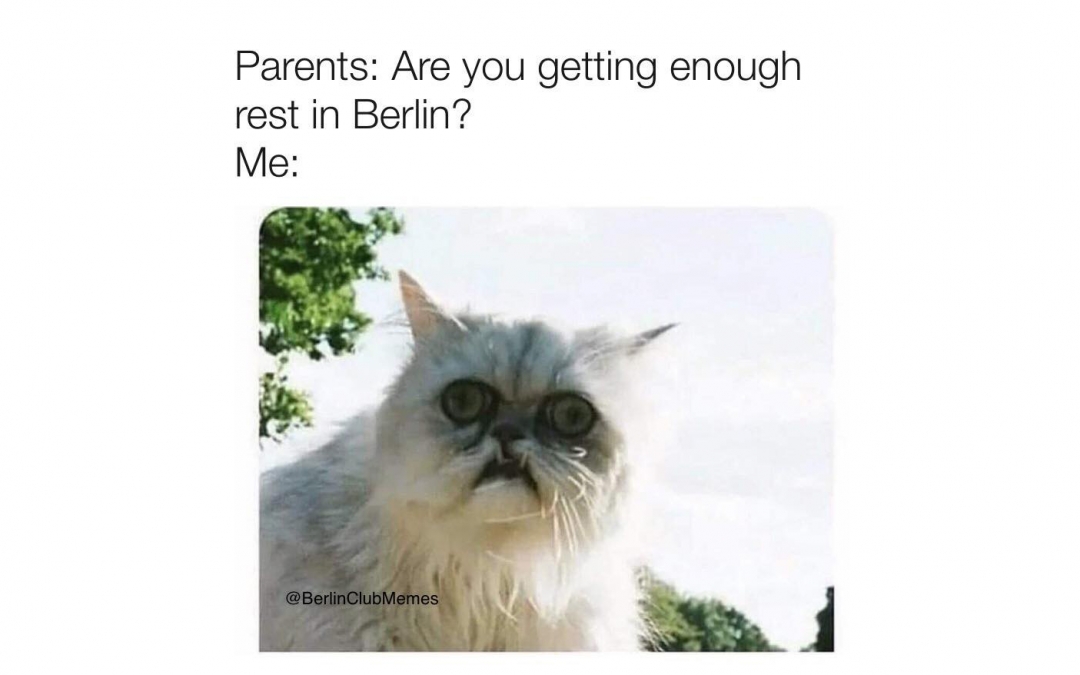 You know Berlin is a place of contrasts. It’s the buzzing startup hub that’s also been referred to as a retirement center for freelancers in their 30s. Fashion weeks are organized here biannually and yet the most prevalent look on Berlin’s hippest streets is along the lines of a scruffy grunge musician. It’s hailed as the city where people can search for themselves, but many seem to get distracted along the way and end up losing their minds. All these dynamics can make everyday life in the city that we still truly heart slightly absurd. Below, we’ve chosen our favorite examples of people channeling Berlin’s flaws into anecdotes that will most likely ring true to you as well.

This guy’s act is a whole thing. Stand-up comedian Daniel-Ryan Spaulding is a dual citizen of Croatia and Canada, has lived in the Netherlands and Norway, and even toured all over Eastern Europe as an openly gay comedian, which makes him one of the pioneers in that field. These cosmopolitan experiences have honed his comedy into an intelligent, insightful and yet incredibly funny social commentary. His videos with the simple yet iconic catchphrase ”It’s Berlin!” have earned him a huge following and he is now working on developing this idea into a TV series. There’s also a newly launched merch collection of T-Shirts with some of the catchiest phrases from the videos that you can order here.

Sophia is a Berlin-based freelance illustrator. She loves the Hauptstadt and is an avid observer of its inhabitants. Her characteristic illustrations tell the truth about every gritty aspect of our urban jungle experience. Many have been able to relate to her comic describing the trials and tribulations around getting into Berghain. We are very excited to collaborate with her on our upcoming guidebook ”Like a Berliner”. Check out the teasers for the book – the Flatmate Roulette and How much of a Berliner are you? quiz. 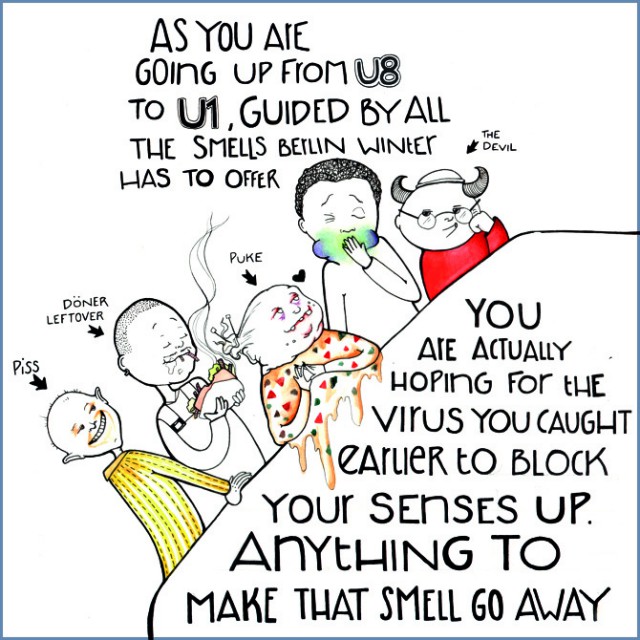 Berlin Club Memes is a beloved fan page on Facebook that collects memes which will tell you all about Berliner’s approach to nightlife using precious few words. The fan page illustrates the differences between the most popular clubs, explores the prevailing stereotypes and encourages you to #thankthebouncer. 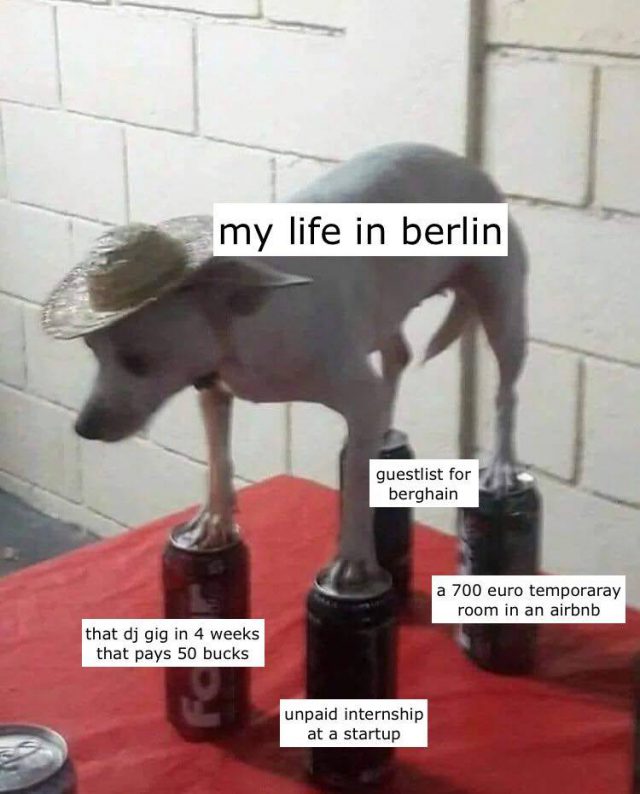 The actress Bärbel Stolz is strolling around Prenzlauer Berg as the ”Prenzlschwäbin” and mercilessly singling out things that don’t quite meet her Swabian standards. In her videos, she delves into clichés such as eco mums and dads from Pberg who always want to make sure every part of their environment is bio and traumatize their innocent children with names like ”Xenia-Adelheid” or ”Friedrich-Anthony”. The videos are in German, but have English subtitles, so it’s also a fun alternative to learn for all you expats.

Joab Nist has an interesting hobby – he just can’t walk past any weird piece of paper taped to a wall or a tree. And the rest of us Berlin lovers can only be grateful for that because, in this way, Joab has created the blog Notes of Berlin – an astonishing archive of notes that are the most accurate description of the city’s relentless, unique character, made up by Urberliners and expats alike. 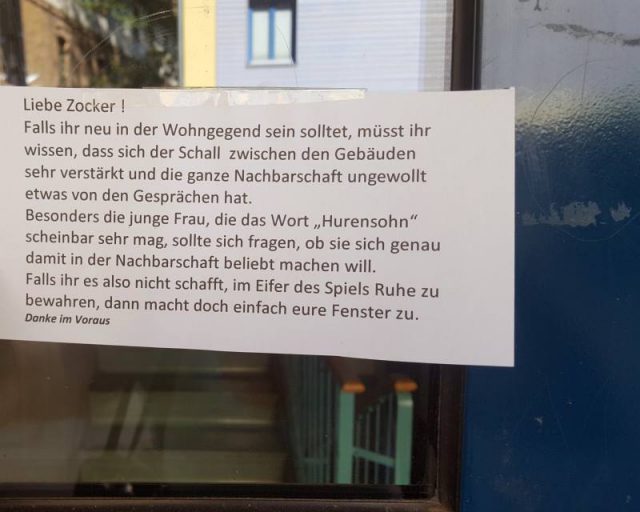 The Instagrammer knurrt operates on a less direct, yet invariably hilarious form of comedy. It features snapshots of the city that might seem random and basic at the first glance, yet actually, transcend the aesthetics of Berlin’s everyday life and explain just what makes its streets the awkward mess that many of us grew so fond of. 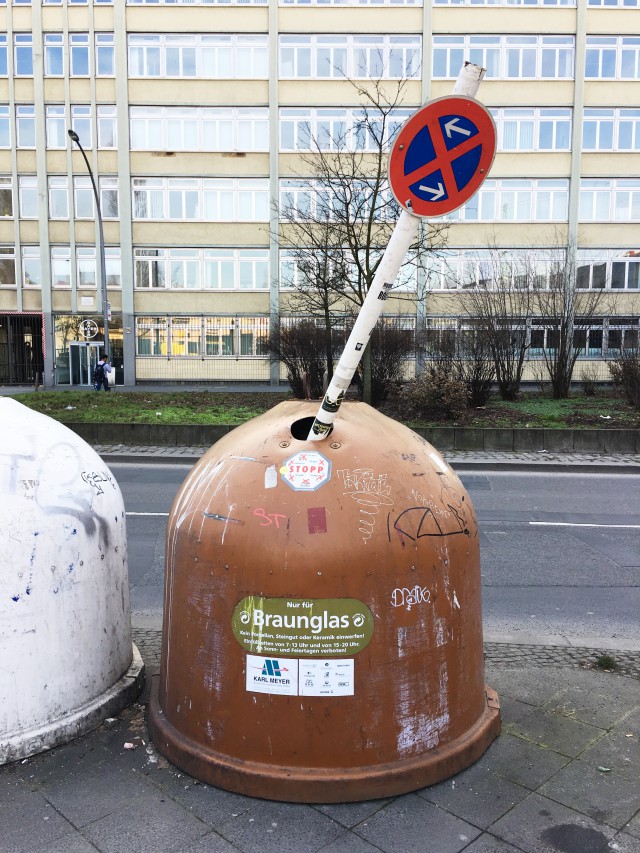 In this classic viral video, Wana Limar personifies the classic Berlin fashion hipster whose characteristics include a preoccupation with Instagram, incorporating plenty of English words into their vocabulary, and actually spending way more time in New York.

This video starring Nate Blanchard might be from 2012, but it still exemplifies a timeless stereotype of a Berlin expat. It’s all about a strong preference for Neukölln and Club Mate, a complicated relationship with the German language and a penchant for noticing faces in public that seem familiar from rather intimate circumstances.

The Colombian-Italian artist and illustrator Xuehka creates illustrations that are literally as colorful as Berlin. Her works are not strictly comedy, but definitely bring out the wackiness in everyday situations, like the bizarre ”This tram terminates here, all change please” announcement. 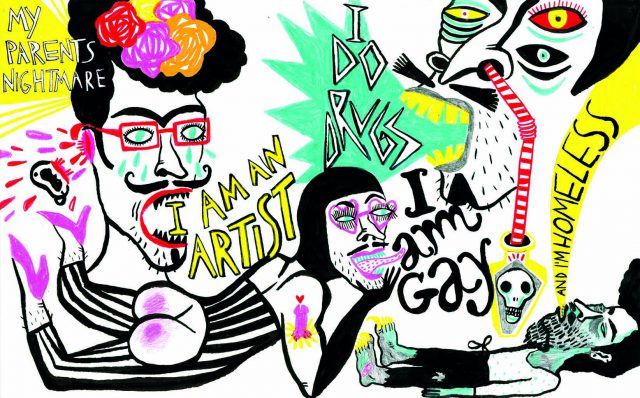 ”Berlin Spree”, the video project of the musician Joel Montagud and writer Hayley Bracken captures one millennial expat as she reflects upon her experience of moving to Berlin. The initial fascination gets flawed by elements of disillusion along the way, as the fellow smitten-by-Bowie bohemians become ”cautionary tales”.

Do you know any other fun videos, comics, people or projects that bring out the hilarious and self-ironic side of Berlin? Let us know in the comments below, we would love to see more!