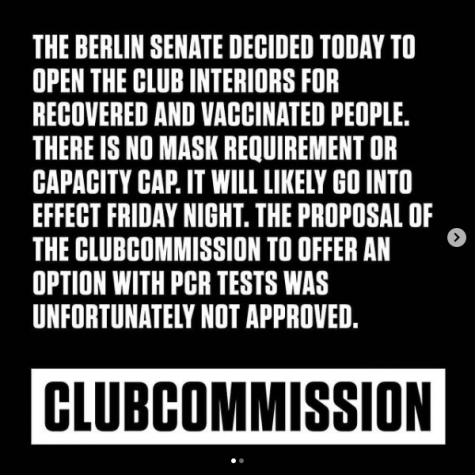 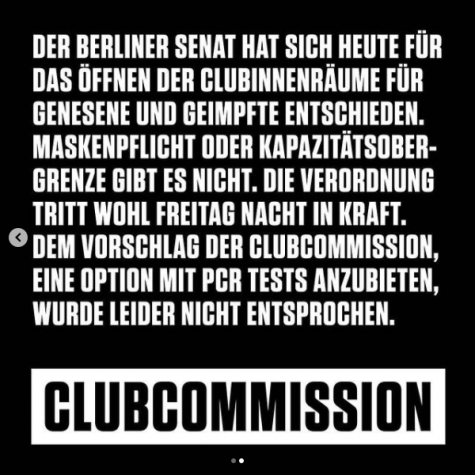 The Clubcommission also announced at the same time, that their proposal to allow indoor parties without masks and distancing with prior PCR testing (that would have been offered for a special price of only 15 EUROS) was denied by the Senate, despite a huge trial with 6 clubs some weeks ago that proved successful. This seems to be a bit of a bitter pill to be honest, because that solution seemed much safer, especially now during a new wave caused by the Delta variant and many documented cases of infection among fully vaccinated people. The first attempt to trail a club reopening with a testing scenario last year was already aborted sometime last year – so the Senat seems to be determined to block any movement here on that front. It seems counter-logical to us to be in the way of safe methods, yet they are now ok with the risk of people getting infected at parties despite being vaccinated and then carrying it around potentially spreading it to others that are not. The fact that rapid testing is considered sufficient to allow entry to indoor areas of gyms, restaurants, and concert halls, yet they are unreliable and not trustworthy for clubs also seems hella shady.

Several other German states had already allowed indoor partying with various requirements or restrictions, such as Saxony, Lower Saxony, Schleswig Hollstein, and NRW. However, some of them have already reversed their decisions due to rising infection numbers. That seems to be a likely scenario to happen in Berlin as well, that’s why it’s a shame the Senat didn’t go with the PCR testing version. I can totally understand how club owners will take this new ruling with caution. So far I have seen few clubs announcing the reopening of their indoor spaces, we’ll keep our eyes out in the next days…