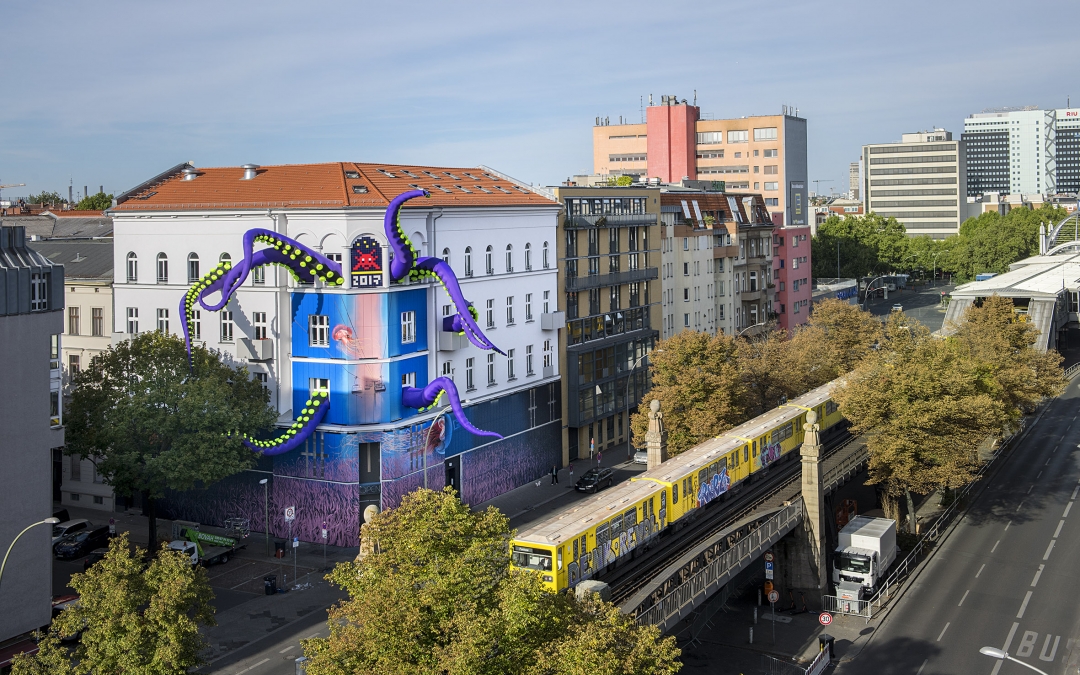 Experience the Urban Nation Museum with a Guided Video Tour

Last Autumn, the incredible Urban Nation museum for contemporary urban and street art has given us one of the most memorable exhibitions with their own Biennale. Using the empty space underneath the subway train viaduct right in front of their main building they installed a walk-through immersive installation featuring countless urban artists from around the world. The main museum building was a sight not to be missed as well, as huge tentacles were sticking out of the windows as if the museum had been invaded by a giant octopus.

It’s incredibly sad what is currently taking over the building: nothing. Because of the pandemic, it had to close much like any other big gallery, museum and cultural space until an unknown point in the future. The current exhibition is excellent and features works from iconic artists such as D*FACE, Nychos, Martin Whatson, Shepard Fairey, Swoon, Vhils, and THE LONDON POLICE. If you haven’t seen it yet, now there is a new way to experience the museum. Following the lead of several other art spaces, Urban Nation has now released a virtual tour, and it’s actually a guided one with hosted by art dealer Markus Georg.

END_OF_DOCUMENT_TOKEN_TO_BE_REPLACED

It’s Sunday, we got nothing much to do, we’ve been stuck at home for weeks, we’re bored, and to be honest, we’re kinda horny. So we thought it might be about time to give you something juicy to occupy your mind (and potentially other parts). We haven’t had a lot of kinky blog posts in a while, and you know we’re quite sex-positive here at iHeartBerlin, so we wanna offer you a bit of entertainment here, and possibly on the following Sundays. The “Short Sunday” used to be a category on iHeartBerlin many many years ago where we presented short films and video clips we found extra cute, so now might be a good time to get back to this tradition.

We wanna start something with a little bit more depth, we thought. A friend of ours sent us a relatively new short film about the obsession of a certain type of masculinity. The film is not really related to Berlin, but it’s an interesting watch nonetheless. We did a bit of research and found four more short films (some of which are actually related to Berlin) that all deal with the topic of complex sexuality in different ways and we thought this would make a great little short film program. To our delight, these five films even cover a wide spectrum of sexual orientations, from straight to gay, lesbian and bi. Hurrah! So without further ado, we let you dive right into it:

END_OF_DOCUMENT_TOKEN_TO_BE_REPLACED

The Dancers from the Staatsballett Berlin Dancing From Home

As you probably know we’re big fans of the Staatsballett Berlin here at iHeartBerlin. So naturally, this new video really warmed our hearts when we first saw it: Initiated and edited by Principal Dancer Ksenia Ovsyanick, 45 of the dancers recorded themself at their homes or wherever they spent their quarantine giving a little performance that seamlessly blends over from one dancer to the next as if they all danced together in unison. The result is a cute little collage of all the dancers that give us some positive vibes and smiles in these strange times. Thank you guys for that, we can’t wait to see you back on stage, hopefully soon!

END_OF_DOCUMENT_TOKEN_TO_BE_REPLACED

The BVG has had some memorable advertising campaigns, but it feels like they set an entirely new precedent with their most recent video. In it, the city’s public transport company announces that they’re applying for a spot on the UNESCO List of World Heritage Sites. How do they motivate this rather ambitious claim? Read on to understand a bit more about the campaign that will most likely surround you in some shape or form for the upcoming months… unless you get everywhere by bike.

END_OF_DOCUMENT_TOKEN_TO_BE_REPLACED

Berlin Moves: A Video Portrait of a Dynamic City

You might remember the works of Alex Soloviev from previous features on iHeartBerlin, including his video titled ”Everyday Berlin” and another one called ”Berlin – the inner layer”. This time, the filmmaker and traveler featured Berlin in a short film that’s a part of a project offering breathtaking insights into cities across the globe.

After including places such as Florence, Stockholm, and Moscow in his recent project, Alex Soloviev has posted a short film with the title ”BERLIN moves”. Indeed, the title is a bit self-explanatory – the video takes you on a dynamic journey across the city. From strolling pedestrians to various modes of transportation, the new film captures Berlin’s diversity in constant motion. You’ll probably recognize plenty of familiar corners and classic Hauptstadt settings. The masterful shifting of perspective will give you the impression of truly observing the metropolis and its inhabitants.

END_OF_DOCUMENT_TOKEN_TO_BE_REPLACED

I’m sure you’re all familiar with the big cosmonaut by Victor Ash that you can see from Skalitzer Straße corner of Mariannenstraße. It’s probably one of the most known pieces of street art in Berlin and has become really a symbol of the district and the city. The idea to create a video mapping to bring the spaceman to life is really ingenious – but wait until you see the final result. END_OF_DOCUMENT_TOKEN_TO_BE_REPLACED