Explore the Most Significant Places Along the Former Berlin Wall 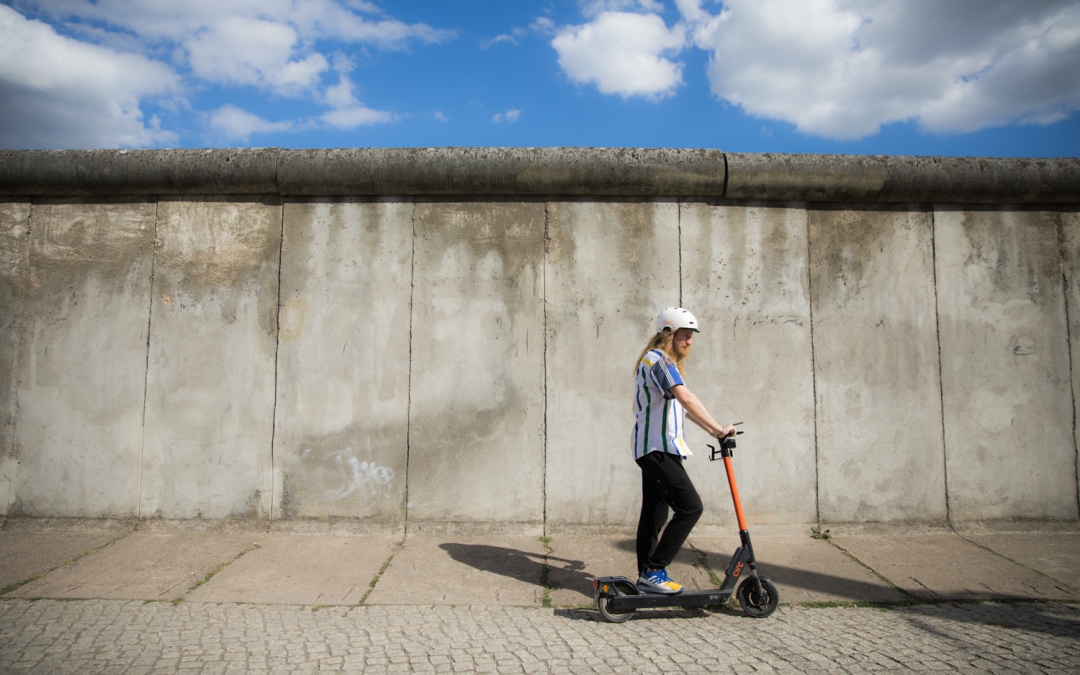 With our brand new tour, we’re going to explore something we’ve talked about already in many of our history-themed pieces before, but we’ve never actually created a guide for: The Berlin Wall. That one element of Berlin’s past that has shaped the cities in endless ways and continues to do so.

But we’re not doing just any tour, we’re doing a tour with one of the new e-scooters that have been popping up on the streets recently: Circ.

When I first heard about these practical vehicles about a year ago from someone who used them in L.A. I was a bit jealous. At the time I had only had experience with the ones that you sit on, but the standing ones seemed so much more seamless and accessible, I was wondering why we didn’t have them in Berlin. Turns out: they were not allowed in traffic until last month. Hurrah! Finally, a new form of urban mobility and ride sharing has entered the city.

The new e-scooter brand Circ got in touch with us before their launch in Berlin. Being one of four brands hitting the streets of Berlin they were, of course, eager to get the word out. They asked us to take a spin with their rides and find a way to make good use of them. 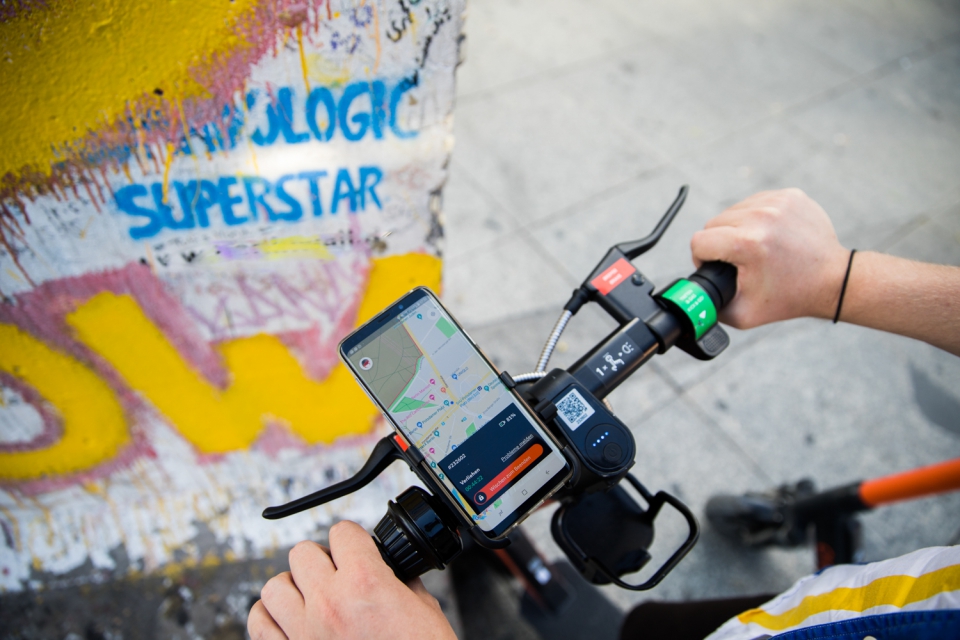 So we went out exploring and the result is the following Berlin Wall guide. It was super fun to ride the e-scooters, it feels unusual in the beginning but you get the hang of it really quick. We felt quite safe on them in traffic on the side of the road or on the bicycle lane which is where you are allowed to ride them. We recommend wearing a helmet because they do get quite fast – up to 20km/h. For a tour with multiple longer stops it’s super practical to hop on and off or change to different e-scooters when you take longer at one place.

And we have a little surprise exclusively for our readers: Use the code IHEART for a 20 mins free ride to explore Berlin as we did. Once you download the Circ app, just put the code IHEART in the voucher area of the app and you are ready to go on a trial ride with Circ (only valid for new customers). You can follow Circ’s journey to build the micro-mobility of the future through their Instagram.

But now let’s get into our little tour!

We started out at the iconic Mauerpark. This really is a place that you shouldn’t miss on your Berlin journey. Especially in the summer on the weekends the park is full of young people hanging out on the grass and the side of the hill, there are graffiti sprayers practicing on the old pieces of the wall on the top of the hill, on the opposite side there are cafes and the big flea market on Sundays. Since recently they added a paved path that goes through the park which is great for cycling or riding the e-scooter through the park. 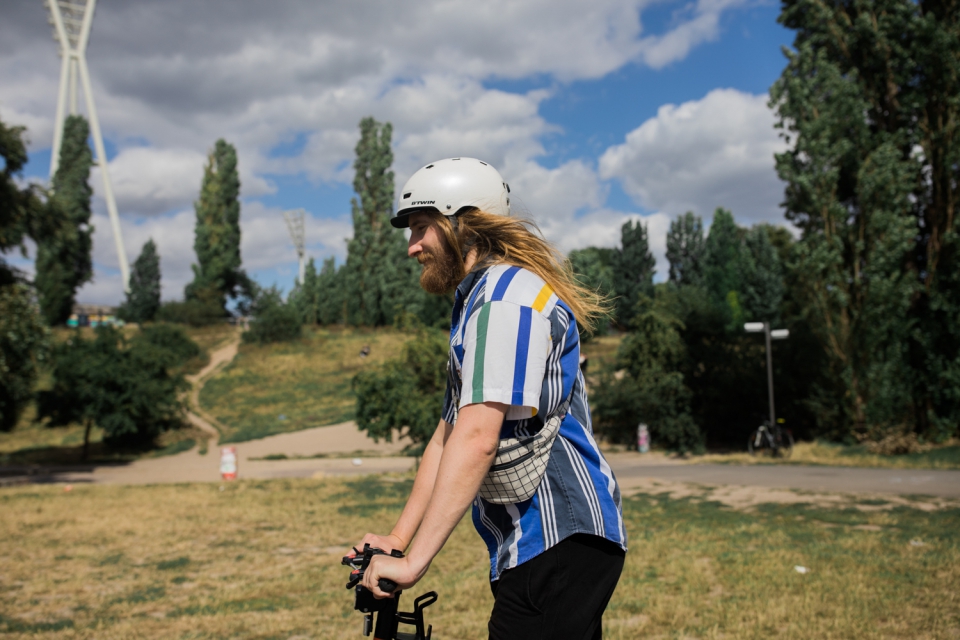 From Mauerpark, we head down Bernauer Straße to the corner of Brunnenstraße. Here is where the relatively new and quite long Wall Memorial starts that goes all the way down to Nordbahnhof. Our first point of interest is the Conrad Schumann Memorial or “Wall Jumper” that you will find at Brunnenstraße on the side of a building. It’s a silver sculpture of a border patrol officer jumping the barbed wire at the Wall to flee to the West. There is also a huge mural of the photo the sculpture is based on at the side of the building. The iconic scene made history. Underneath the sculpture is also the office of “Berliner Unterwelten”. They give tours, for instance of the escape tunnels to the West that go underneath the Wall at this very place. 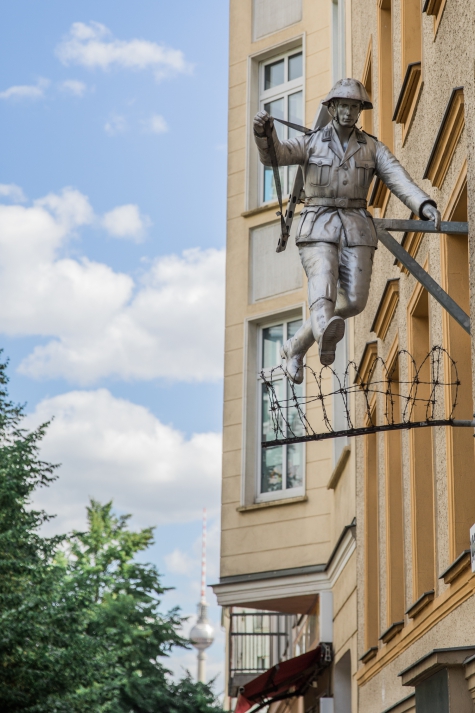 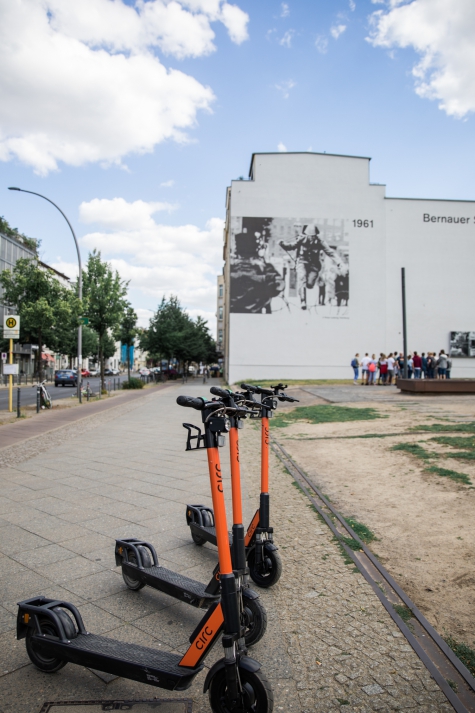 When you ride further along the Wall Memorial and its iron rods that reach into the sky you will notice a big red mural on the side of a building. It’s a piece of raw meat being sliced by a big knife. If you look closely, the pattern of the meat depict the outlines of Berlin and its districts and the knife as the years of the division engraved. The message is clear. The mural by XI Design was supposed to be only temporary, but people have been so impressed by it that it has stayed for years now. 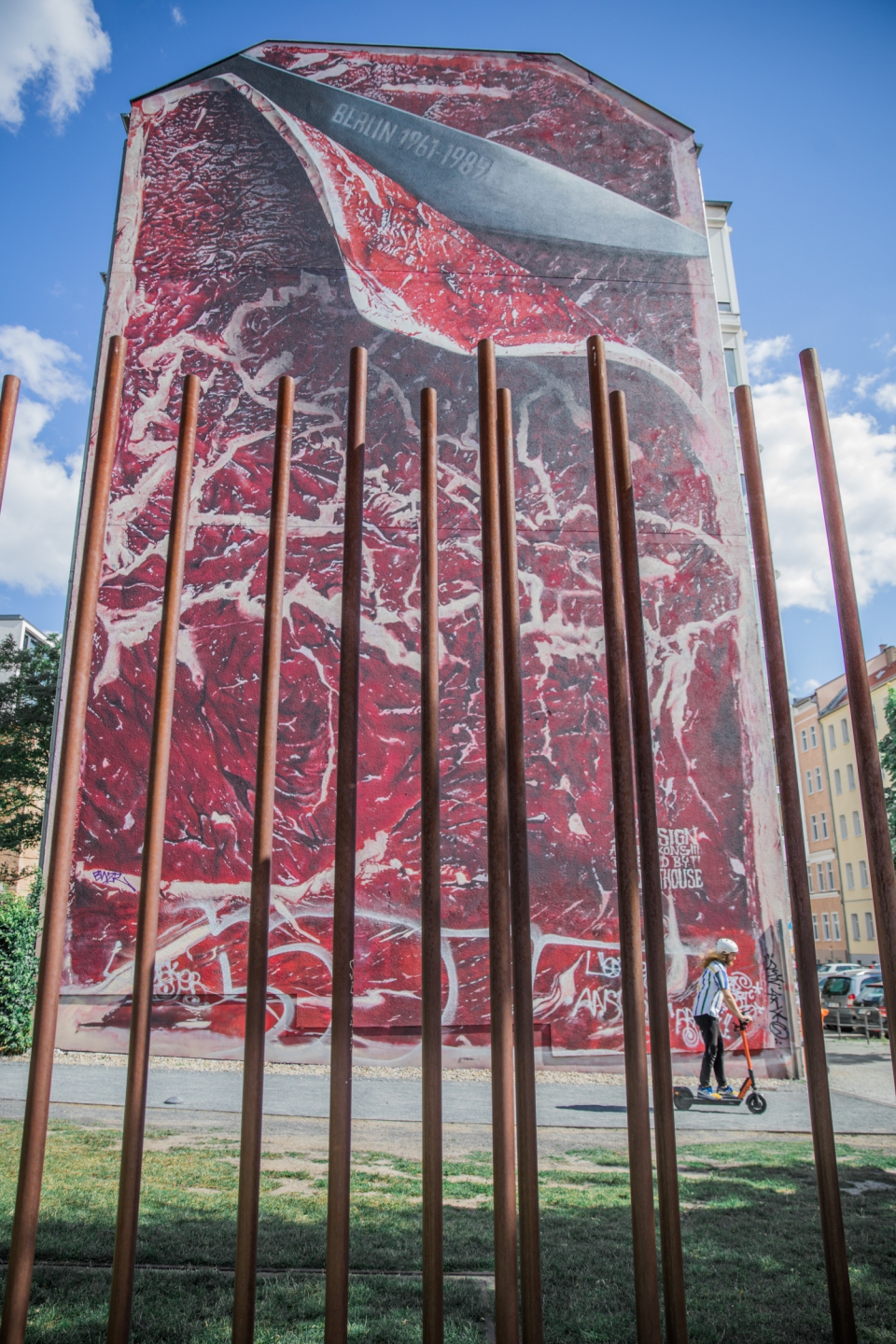 The next stop is a quite unusual church with astonishing architecture. If you go inside the wooden panels create a stunning game of light and shadow. The church was built in place of an old one that got torn down because it was in the so-called “death strip” between the two parts of the Wall facing the East and West of Berlin. It blocked the view of the Wall so the GDR ordered to demolish it. After the reunification, the piece of land was given back to the church and they built this chapel. 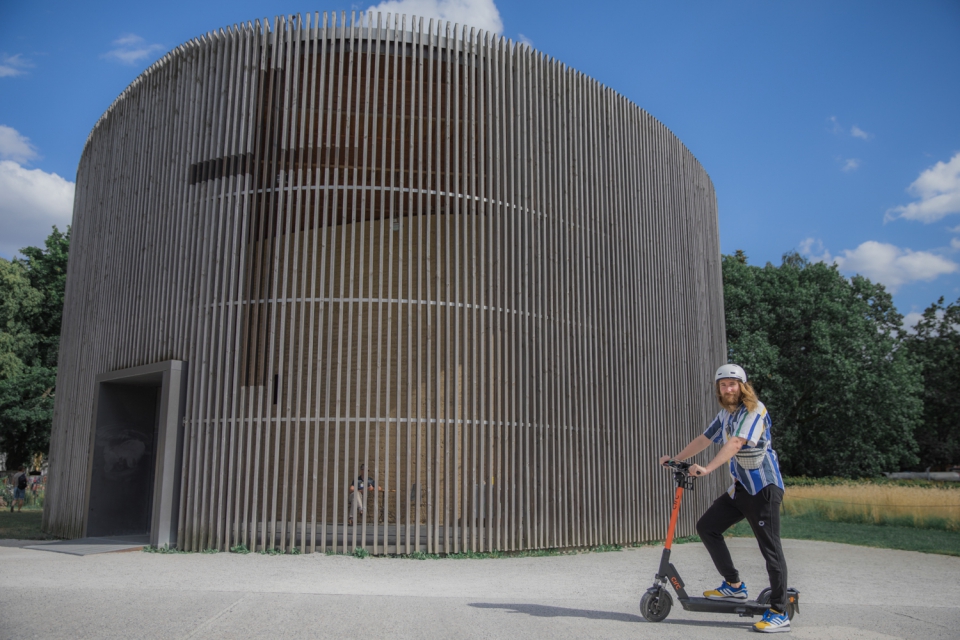 Along this part of the former Berlin Wall, you can see a lot of little exhibits and plaques explaining aspects of its history. It’s really interesting to read up on all the stories about escapes and tragic deaths that took place here. There is also one stretch of Wall that was kept completely intact and you cannot enter the death strip area or the little border control tower. There is a Wall Memorial museum on the opposite side with a viewpoint that lets you take a peak, though. 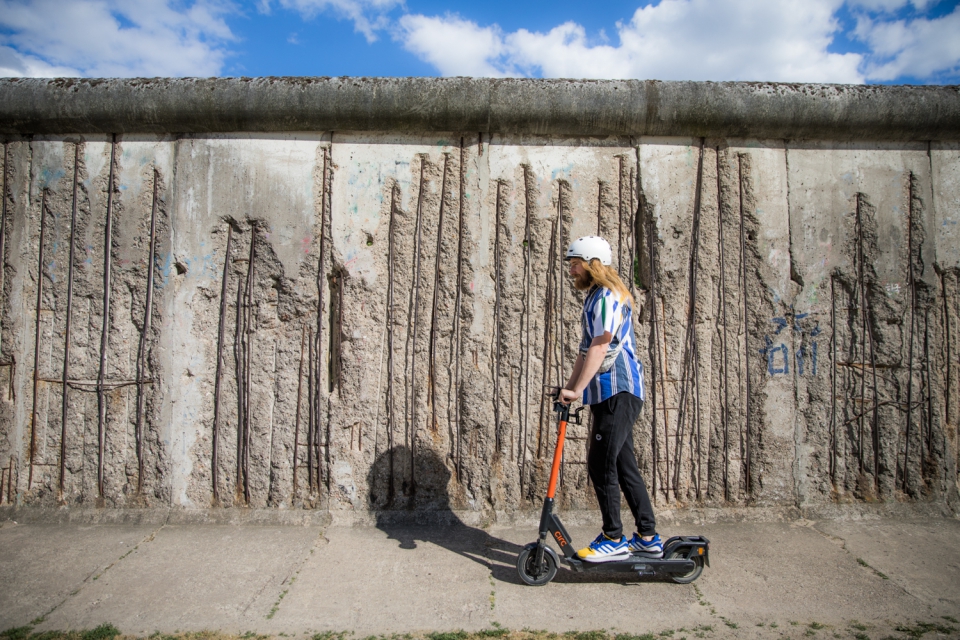 We’re leaving the Bernauer Straße area and take a little longer joyride on our Circ e-scooter now heading through Nordbahnhof, over Invalidenstraße and a few blocks down Friedrichsstraße to get to the Tränenpalast that sits right by the Friedrichstraße station. This place used to be a border control point for the train service that went into the West from this point. So many tragic and tearful goodbyes took place here that people named it “palace of tears”. It’s a museum now. 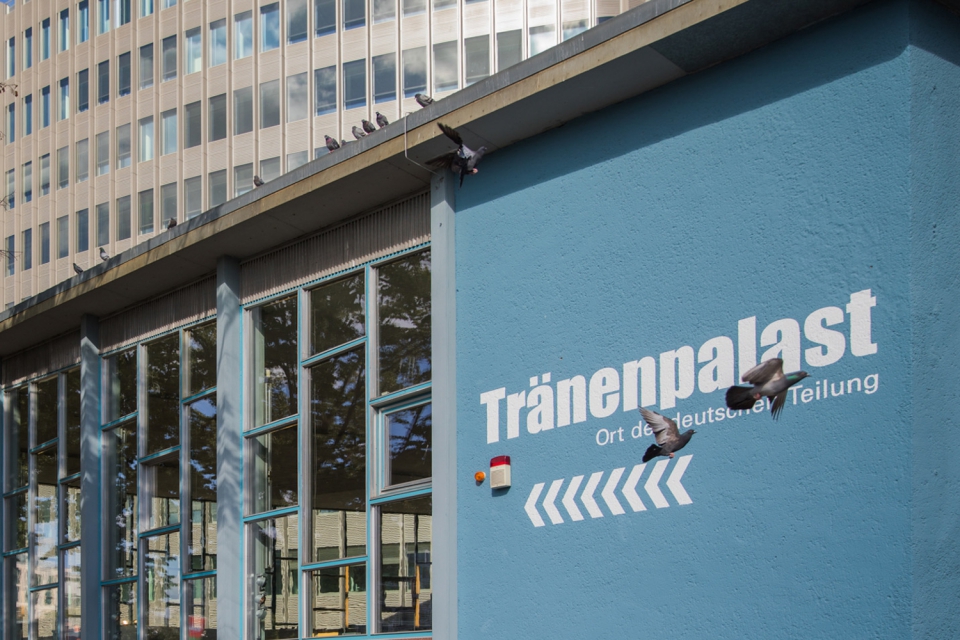 From Friedrichstraße we drive down to Unter den Linden and all the way to our next stop – Berlin’s most iconic sight: The Brandenburger Gate. It’s gonna be full of people here – it’s hard to imagine in the time of the division the place was avoided by Berliners because the Wall went right by there blocking the view of this historic monument. 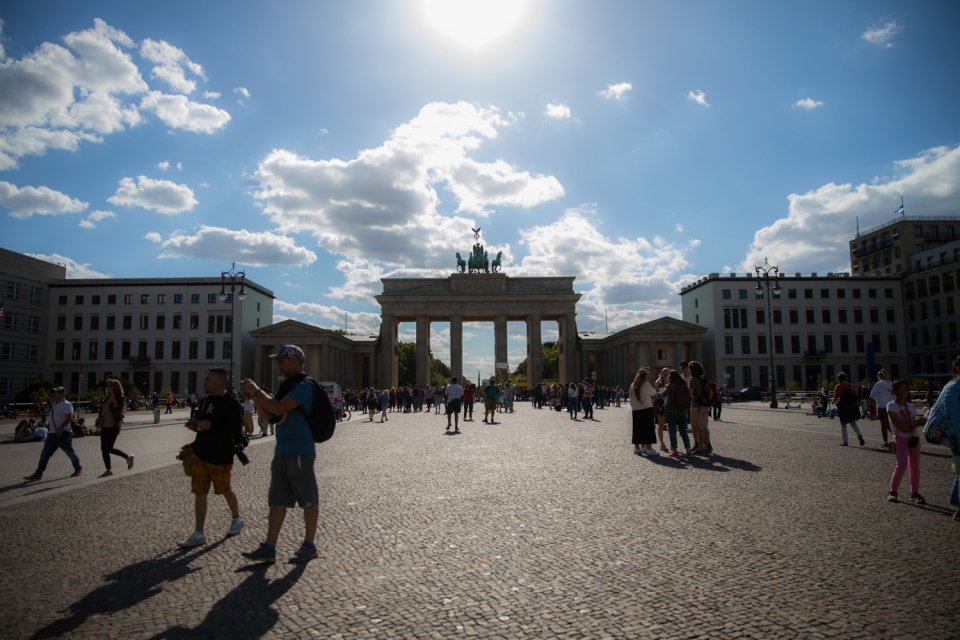 Our next stop, the Potsdamer Platz, is one of the quarters that was newly built in the 90s on formerly totally empty areas where the Berlin Wall went through. Its architecture is a stark contrast to the rest of the city which is why Berliners mostly don’t like it here. The ensemble of the 4 high rises is an unusual sight and should give the city a more cosmopolitan vibe. A true Berliner will argue that it doesn’t really need that. 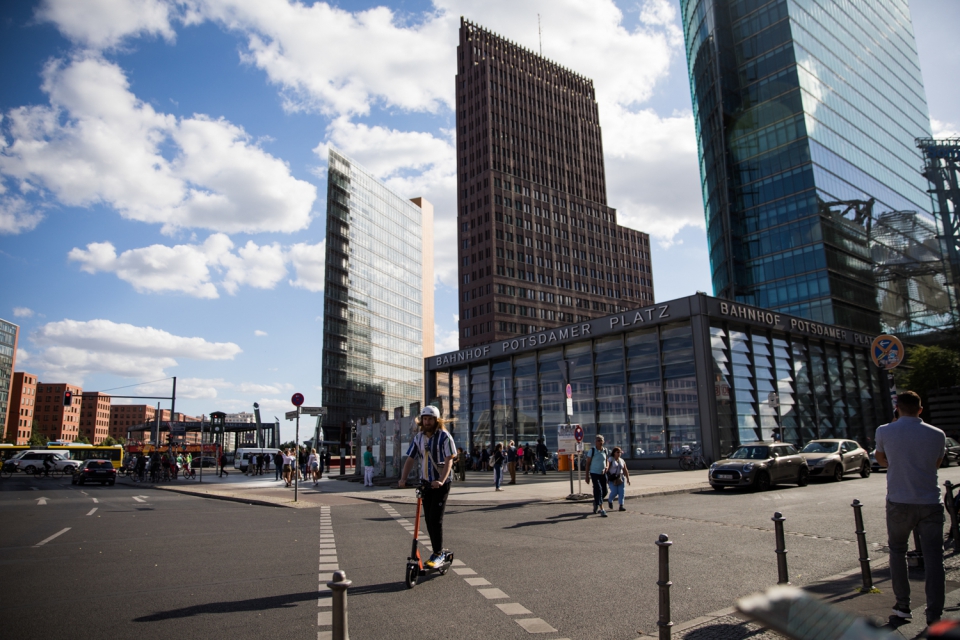 The Weinhaus Huth is the one old building at Potsdamer Platz that was the only house still standing in the area before the constructions. They couldn’t tear it down, so it had to be integrated into the new quarter. During the construction, the reputation of the project was at such a low point that they organized a “ballet of cranes” which could be viewed from the roof of Haus Huth to create some more positive publicity. 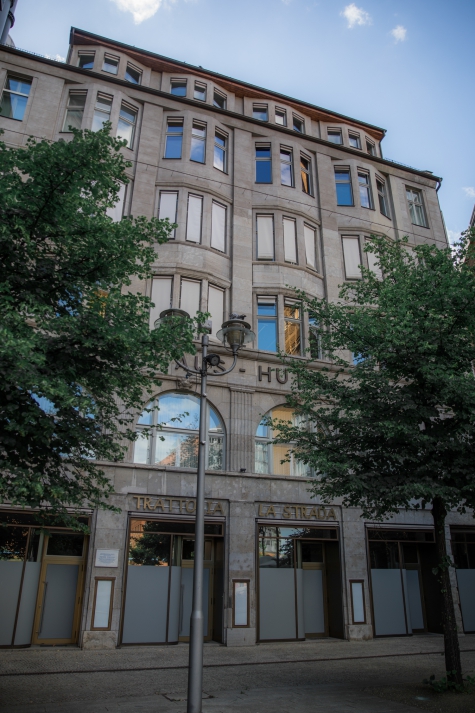 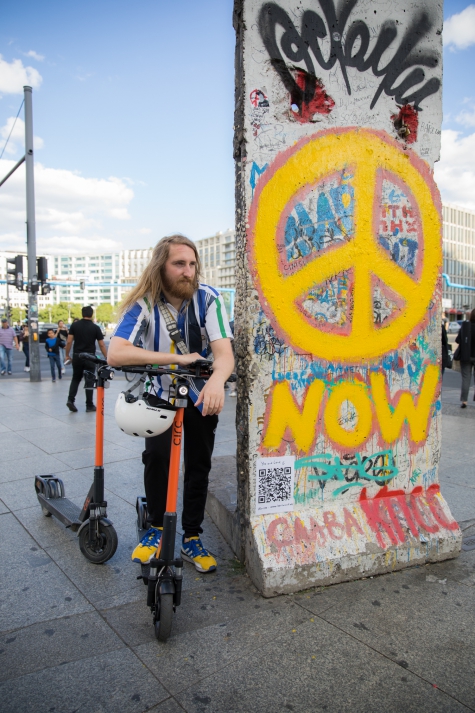 From here we already get to the last stop of our tour: Martin-Gropius-Bau – one of Berlin’s most magnificent exhibition spaces. The beautiful building was heavily destroyed during WWII and was almost demolished in the 70s if it weren’t for Walter Gropius intervention. Despite its reconstruction, it suffered from its proximity to the Berlin Wall so much that they had to use the back entrance because the main one was facing the Wall. It wasn’t until 10 years after the reunification that they restored its original entrance. 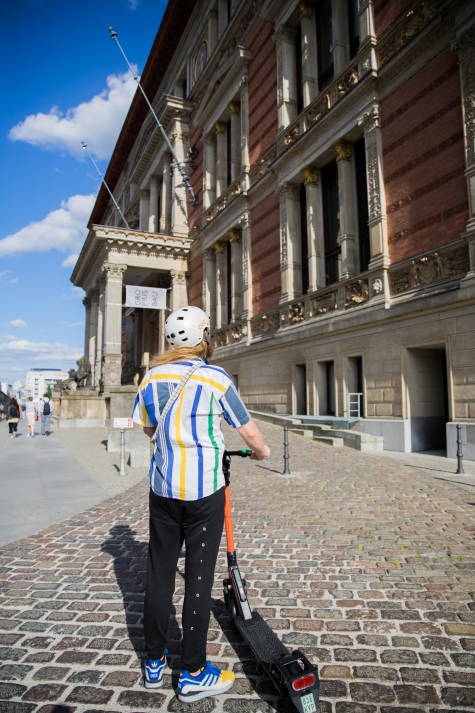 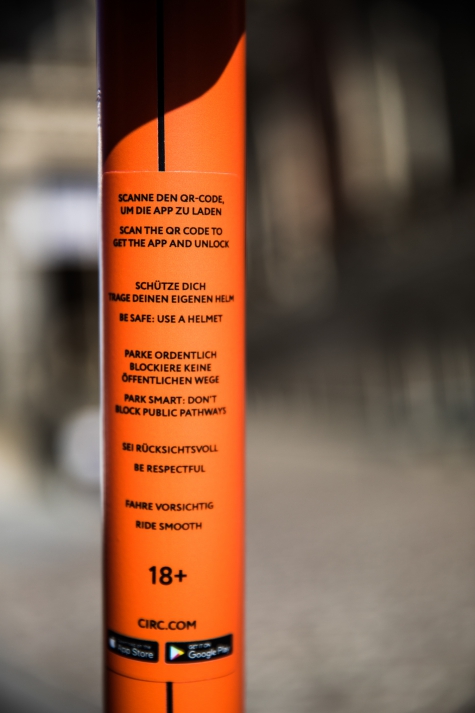 This already marks the end of our Berlin Wall tour. We hope you enjoyed it!

If you are still eager to see more you could hop on your e-scooter and extend the tour further. Just a few blocks down you will find the famous “Checkpoint Charlie” and if you have the time you could head along the Spree to Friedrichshain to see the famous “East Side Gallery” – the part of the Berlin Wall that is covered in murals. At the end of it, you can finish your tour at “The Wall Museum” filling in the final gaps of your Berlin history lesson.