Democrats Abroad released a statement explaining the motivation behind the rally, “To protect the results of this election, we call for all votes to be counted. There is a legal, electoral process underway in which record numbers of voters have participated. As this election is taking place in unusual circumstances, we need to be patient and make sure every voter’s voice is heard: a reliable result is more important than a premature declaration of victory.” The counting of mail-in ballots is especially important for Americans living abroad because they are not given the opportunity to vote in person.

However, Trump had already declared a premature victory despite the results remaining unclear as both Democrats Abroad and voters in Berlin predicted. Hardee expected Biden to win the popular vote but the election to drag on for days. “I have no idea how long we’ll be on tenterhooks waiting for final results,” she said, “or what kinds of shameful shenanigans the GOP will pull with challenges in court, obstruction at voting sites, and armed extremist militias threatening voters.” Karl Wilder, who’s been in Berlin for almost five years gave a somewhat grimmer prediction. “I think the US will soon be in a full civil war,” he said. Another American, Charity Klimaitis anticipated Trump’s refusal to let go of the White House. “To be very honest, I think Donald Trump is a total dictator and will contest the election in any way possible,” she said. “I am genuinely scared especially for my friends and family.”

Berlin is of course a leftist city and the American population also reflects that; Democrats Abroad have their largest chapter here with 5,000 members. The organization pushed especially hard this year to increase voter turnout in Germany. Lines said that membership is up to 16,000 this election season, from 10,000 in 2016. 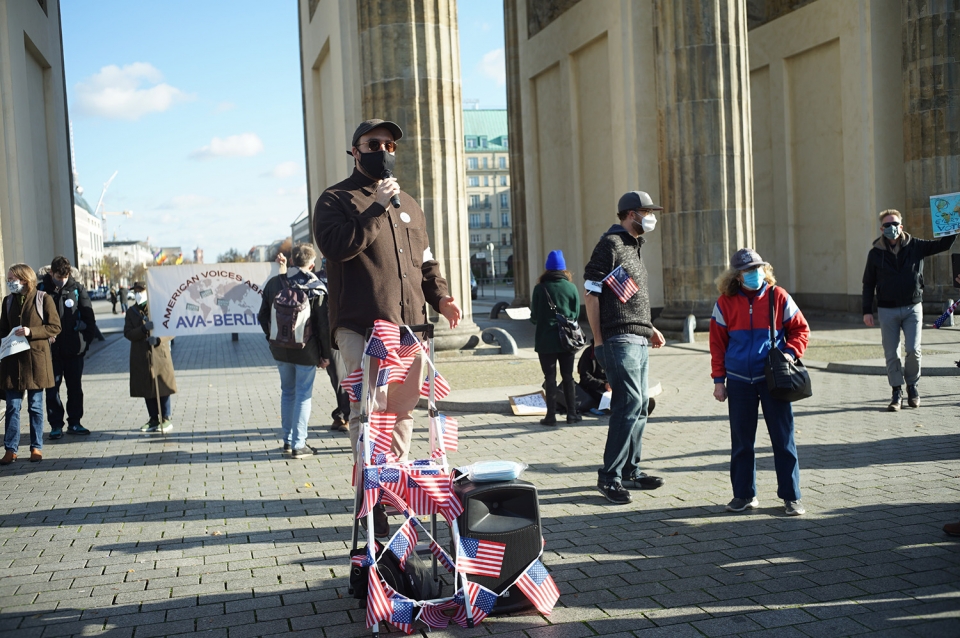 Democrats Abroad usually campaign at events around Berlin but with the coronavirus outbreak, registering voters became much more difficult. Instead, Lines said that Democrats Abroad turned to phone banking to register more voters in Berlin. Their efforts seem to have paid off; it’s projected that the overseas vote doubled this election season from only 7% in 2016.

Although the organization obviously leans to the left, Lines claims the purpose of the organization goes beyond partisan politics. “We are called Democrats Abroad, and we are a part of the Democratic Party, but our main goal is making sure people vote and helping them do that,” she said. “Our job is to inform them that they can vote and that they should vote.”

Democrats Abroad is not the only organization working to get Americans abroad to turn in ballots. Republicans Overseas, the international branch of the Republican Party, was busy on election night speaking on German television programs such as Phoenix Runde and Das Erste. However, James Tiedeman, a representative from the organization did praise Democrats Abroad for their efforts to register voters in Germany but attributed this power to their funding by the Democratic Party.

Lines said that although the party does support the organization at an international level, the assumption that these funds trickle down to specific chapters is incorrect. “All the organizing that happens on the ground here in Germany and all other countries is financially supported by member donations,” said Lines. “We are a volunteer-run organization.”

Although Republicans Overseas is based in Frankfurt and does not have a Berlin chapter, Tiedeman said he thought it would be “a total landslide victory for Trump.”

The rest of the world seems to be paying close attention to the election as well. Here in Berlin, Americans expressed their frustration at the scrutiny the States is currently under. “A lot of my classmates have a very negative view of Americans, which is quite frustrating,” said Klimaitis. “I think that there is a lot of attention on ‘why would Americans vote for Trump’ but they lack understanding of things like voter suppression, the electoral college, and how Trump does not play by the rules. This is a modern-day fight for democracy, and America needs it allies to step in where the government fails.”

On Friday evening, news outlets called the race for Joe Biden and Americans everywhere celebrated. A group gathered on Sunday afternoon in front of the Brandenburg Gate to toast the new administration. Americans applauded the Vice President-Elect, Kamala Harris, and expressed relief that Trump had been voted out of office. Miley Cyrus’ Party in the USA echoed around Pariser Platz as Americans in Berlin rang in the next four years.