How It Was Like to Arrive in Berlin 20 Years Ago

It’s the year 2000. While I was already in my late teens and fresh out of school the rest of the iHeartBerlin crew that you know today was still munching on Fruchtzwerge. It’s the year that I arrived in Berlin, and boy, this was quite a different kind of spectacle than it is nowadays. Imagine coming here without knowing anybody because there were no social media channels to connect with people before you even arrive. And imagine walking around the city with a foldable paper map because there was no Google Maps. Imagine the Eberswalde U-Bahnhof in now-quaint Prenzlauer Berg being the Kottbusser Tor of the time (no idea what the real Kottbusser Tor would have been like because you would JUST NOT GO THERE).

It was the time before the big Berlin hype, the time before waiters that only speak English, before the cult of Berghain, before all these big shopping malls, before Berlin’s main train station, before people complaining about high rents or gentrification, before casual conversations about drug use, before mobs of tourists, before laws against leaving dog poop in the streets, before Air Berlin went bankrupt, before Tempelhof was turned into a gigantic park, before jobs existed in Berlin. It was a totally different world back then. It was a Berlin on the borderline between the raw, untainted post-wall 90s that so many of us older new Berliners idolize, and the Berlin of now. 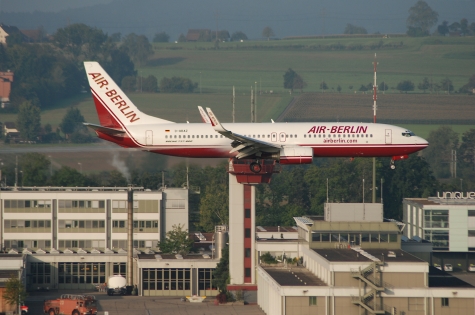 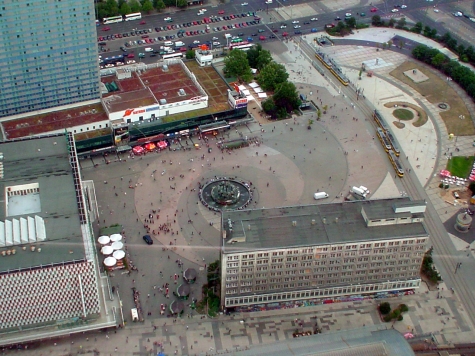 At the beginning of my Berlin life, I was only looking forward to all the changes and improvements in the city. The old, the nostalgic, the abandoned side didn’t attract me back then – I had enough of that coming from a town in the former East. I wanted to see the futuristic side of Berlin – one that quite honestly scares me now.

One of my favorite places of that kind was the Sony Center. Can you imagine? Berliners hate that area with all of their hearts. But I really liked the at-the-time modern architecture, the cinema (still showing dubbed movies then), the Sony store, the ice cream shop in the shopping mall, the clothing stores there. It’s kind of sad to see both of these places closing by the end of 2019 (the mall it least in its current form). But this place gave me a lot of hope and enthusiasm for the city.

Exploring the city, finding out about places, meeting people, hooking up – this all worked so different back then. (I almost feel like your grandmother talking about pre-war stories right now…) I wonder how my life would have been if apps, social media, etc. already existed at the time. On the one hand, it would have certainly made it easier to connect with the right people (I’m very confident I would have had more sex!) and find the right places (it would have spared me some disappointment), on the other, it would have taken away a bit from the exciting part of making your own experiences rather than repeating other people’s experiences. 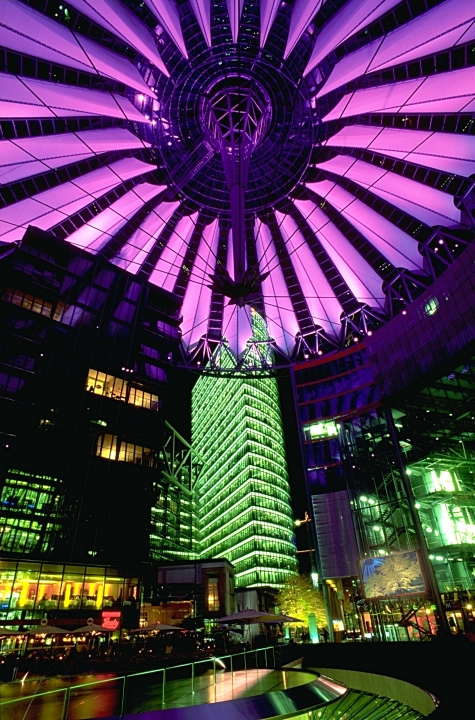 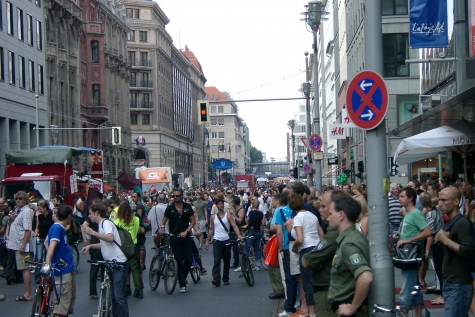 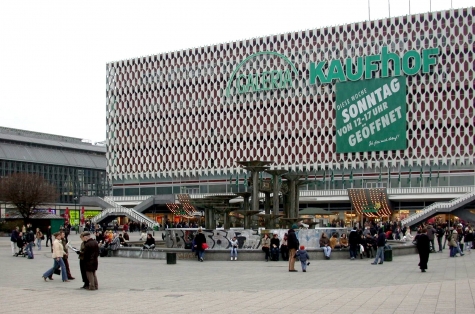 Instead of blogs, Facebook events and Instagram stories of cool people, back then I had to rely on printed city guides such as 030, Tipp, Zitty, and Prince. I remember seeing all these countless party listings of clubs I had never heard of before and not knowing which ones to go to. Later there was also a closed online forum for techno fans called Restrealität (it still exists) which formed after the closing of Berghain’s predecessor Ostgut had left an entire scene of party folks hanging in the balance. People exchanged about secret open-air raves and new underground techno parties here – especially the legendary history of Bar25 was heavily discussed here. I was personally never a member, but some of my party friends got their recommendations for the best parties here which led me to crazy illegal raves in parks and abandoned places. It was exciting and so unpredictable.

As you can imagine the nightlife was pretty different 20 years ago. Today, it feels pretty glossed over with fashion trends and fancy DJs. Back then, it was way more relaxed, super improvised and raw. Long queues and getting bounced at the door – this was not remotely as common as it is nowadays. Many of the now ‘touristy’ clubs were still brand new and super hype at the time. Of course, a whole generation of clubs from back then doesn’t even exist anymore, such as the whole ensemble that used to be in abandoned industrial buildings between Warschauer Straße and Ostbahnhof, among the aforementioned Berghain predecessor Ostgut along with the original Panorama Bar, as well as the huge techno club Casino that was already hosting daytime open-air Sunday sessions long before Bar25 made this their trademark. KitKat was still in Metropol and was a little more hardcore and a little less hipster than now. 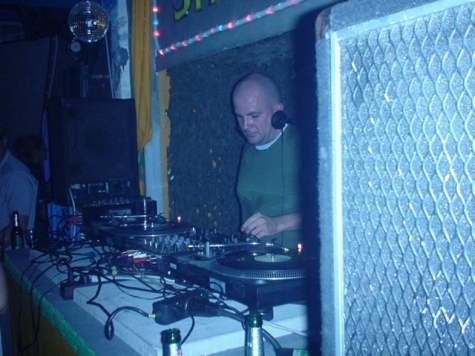 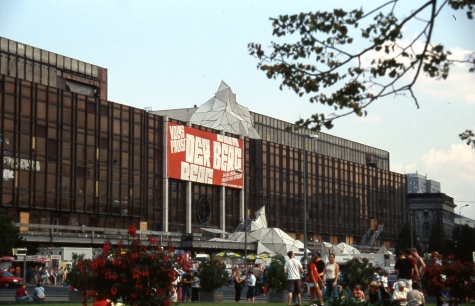 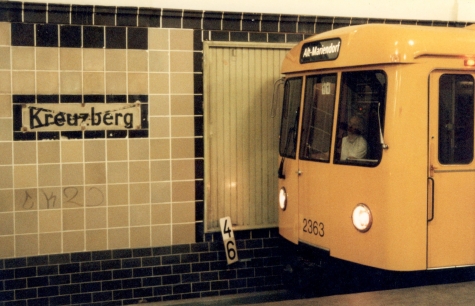 Of course, the nightlife was not the only thing I remember being very different. Let’s talk about one hot-button-topic of today that was a complete non-issue at the time: Apartments! I arrived with a plan to find a room in a shared flat. After visiting a few where I was one of maybe five other applicants each I couldn’t really see myself moving in with these strangers. What a little snob I was at the time (I have opened up to this in the meantime…). In the listings of a newspaper, I found a studio apartment, in fact, there were 4 available units in the same house and I had the luxury of choosing the nicest looking one. It was, of course, dirt cheap and super well located in Friedrichshain near the subway. I have to admit, I had some crazy neighbors there that drove me half-insane with their noise. But thankfully this problem never occurred again in any of my following apartments.

Dating, at the time, was pretty much the same catastrophe than it is now, only for different reasons. The ones you wanted you could never really get a hold of and the ones that stuck around were mostly as weird as characters from Tim Burton movies. And you had to bring up so much more courage to approach people in real life because there were no apps where you can later approach your crush with the safety net of digital indifference. When you saw someone cute, you had to go for it or you’d never get lucky. To be perfectly honest with you, my approaches, unfortunately, more often than not ended with nervous diarrhea on a dirty club toilet than an exciting one-night-stand.

If you asked me how I would sum-up my early Berlin life, I would probably answer: weird. But not necessarily in a bad way. I sometimes miss that sensation of being this teeny-tiny spec of life in this big big dark city feeling a mix of excitement, curiosity, and dread. I have this distinct emotional memory from when I was spending a night in a place that was not mine, in a neighborhood I was super unfamiliar with, it was dark and raining and I looked out the window into the streets wondering where the fuck on earth I was – it could have been a city in deep Russia for all I knew – and I asked myself if I would ever feel like I fully arrived here before this big grey blob of a city would swallow me whole.