The Story Behind the Iconic Kiss on the Berlin Wall 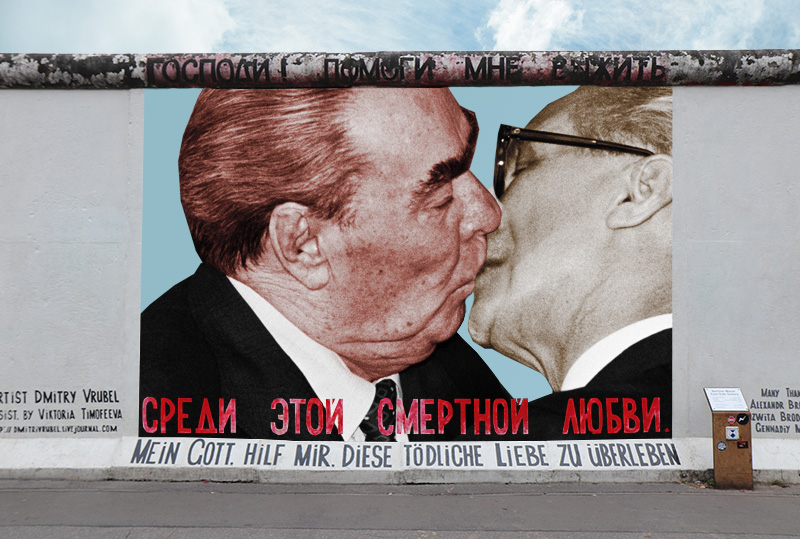 When we think of Berlin as a tourist destination, there’s one spot that invariably attracts all kinds of visitors. Whether it’s your grandma or the cool chick you met in London, they’ll want to see the East Side Gallery. And while you’re there, don’t be surprised when your guest (well, maybe not the grandma), will ask you to take a selfie with what’s become the most recognizable graffiti of them all.

Its actual title is ‘’My God, Help Me to Survive This Deadly Love’’, but if that doesn’t ring a bell, you probably know it as something along the lines of ‘’Two Older Guys Sharing an Intense Kiss’’. And guess what? Although the image itself is now widely regarded as something of a symbol for Berlin’s general inclusivity and the city’s welcoming approach towards anything LGBTQ, the history behind it is a bit different.

The title isn’t written in Cyrillic without a reason. The graffiti is not just a product of its creator’s imagination – it’s a depiction of a photograph  taken on the 30th anniversary celebration of the foundation of the German Democratic Republic (Eastern Germany) in 1979. The two men depicted in it are Leonid Brezhnev, the General Secretary of the Soviet Union at the time, and Erich Honecker, the General Secretary of the Socialist Unity Party of the GDR.

The act the two characters are engaged in was a kind of a socialist greeting. The kiss itself really wasn’t supposed to inspire any romantic notions – it was just of a ‘’fraternal’’ nature – ‘’Bruderkuss’’, as Germans call it. The deadly love mentioned in the title could possibly refer to the military agreement between the two states.

Knowing the context obviously enriches our interaction with the work of art, but I can’t help feeling that the colorful reenactment of the black and white photography makes those serious guys look kinda cute and very into it. Who knows, maybe they were? After all, no love is ever flawless, and sometimes these very fleeting moments of bliss are all we can hang on to.

text sources: Bruderkuss and ’‘My God, Help Me to Survive This Deadly Love’’ on Wikipedia