The Bizarre World of Extraweg: An Interview with the Berlin-based Artist 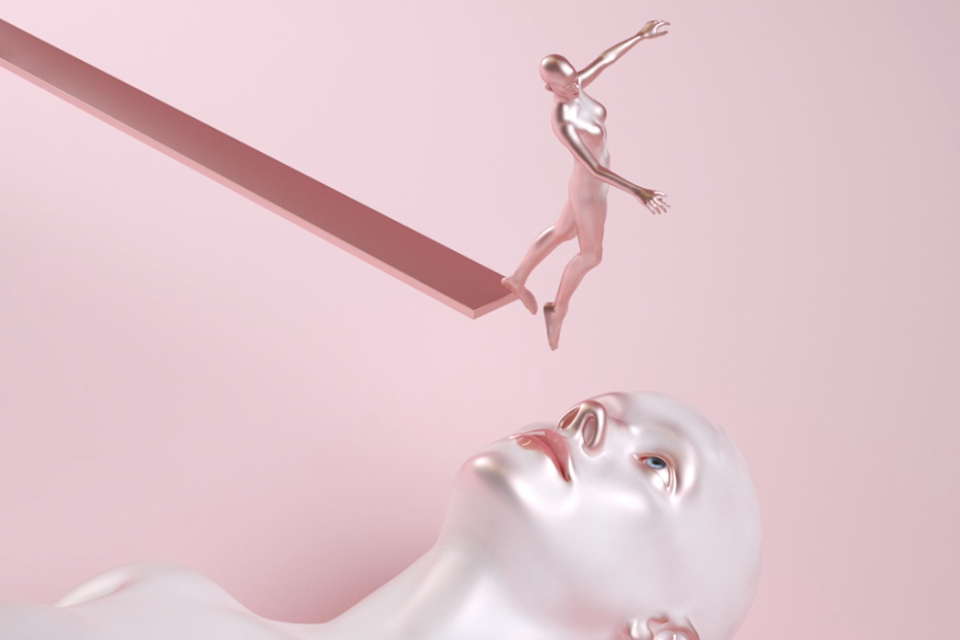 Just a little over a year ago motion designer Oliver Latta a.k.a. Extraweg started to share his artwork on Instagram and, quickly, hundreds of thousands of people fell in love with his unusual and captivating animations. Especially his recent videos, marked by their unique clean pink style and the elasticity of his figures, fascinated a whole generation of social media users and left us questioning: What is it that he created, that holds such a strong spell over the viewer? But before you get lost in one of his captivating loop videos, make sure to check out our talk with him. He, who we found through his artwork on his Facebook page, has one especially important message about that: Find inspiration in everything everywhere – outside of the realms of phones and computers.

We are super happy about your viral success on Facebook! Can you imagine what people like so much about your art?

First of all, I would like to thank you for your interest in my work!

It all started with Instagram – in March of last year I started releasing the first animations in order to personally establish myself as a motion designer. Starting with the first post I already received many positive comments.

Generally, I think that the animations encourage people to think. Which becomes apparent when looking at the comment section of the videos.

You have to keep in mind that 90% of the information perceived by our brain is visual. Although aesthetically pleasing, the videos I create are very complex. They demand elaborate technology to represent exactly what I imagine. Every second requires many hours of intensive work.

If you had to assign a theme to your work, what would that be?

I do not think that it is possible to assign a specific topic to my work. Usually I am inspired by everyday situations. I like playing with them and playing them out in an ambiguous and new way.

Personally I find it very important not to lean too much towards one single direction. I try to make the audience curious and to make them think – everyone should find their own interpretation for what they see.

Your animations (such as the hanging human ball over the open mouth) are sometimes socially critical. Was there an event that specifically influenced you to produce these pictures?

It is true that in every post you can recognize some social criticism, but it is also true that these do not refer to a particular situation.

As an artist, I try to focus on provoking sensations in the viewer, which are often perceived as unpleasant and pull him out of his comfort zone in order to get his own interpretation of the seen.

I am interested in playing with ambiguity and I enjoy reading the various comments and contributions to my animations.

Although your animations deal with violence and death, they never seem threatening. Where does your interest in that topic come from?

Violence is omnipresent when we open the newspaper or turn on the TV, and death is part of life. However, claiming that my videos are about death and violence seems too categorical for me, and as I said earlier, that would be just your personal interpretation.

I mostly use monochrome materials, bright colors and a little slowed down movements, so as not to distract from the content too much. I guess that could be the reason that my animations never seem threatening.

Is it a coincidence that the figures in your videos are looking like sex dolls?

This is a very interesting approach, which, frankly, I’ve never thought about before. However, this is a personal interpretation.

But as I said before, I try to make the animations as simple as possible, so as not to distract the viewer – nudity is chosen, in this context, rather as an aesthetic simplicity.

Some of your videos are quite provocative. Have you already received negative feedback and how do you handle it?

If you try to provoke the audience, you have to expect criticism or negative comments, that’s part of the game. I accept that. So far I’ve never felt personally attacked.

What are your plans for this year? Are there any projects that you would like to tell us about?

Honestly, I’m still (positively) shocked by the good perception of my animations and the many new requests I receive every day.

I will always have an open ear for interesting inquiries, but right now I’m happy with the agency I work at in Berlin. I have the opportunity to work with a fantastic team on big and international campaigns.

The world is full of unknown people with different ideas and great talent. It’s almost magical to imagine using an app like Instagram to reach so many people from home.

Rather than mentioning different private accounts at this point, I would like to encourage your readers to truly open their eyes and seek inspiration in everything they encounter daily.

by Franziska
on February 7th, 2018
in Art, People, Videos