Make Some Noise and Save Your City 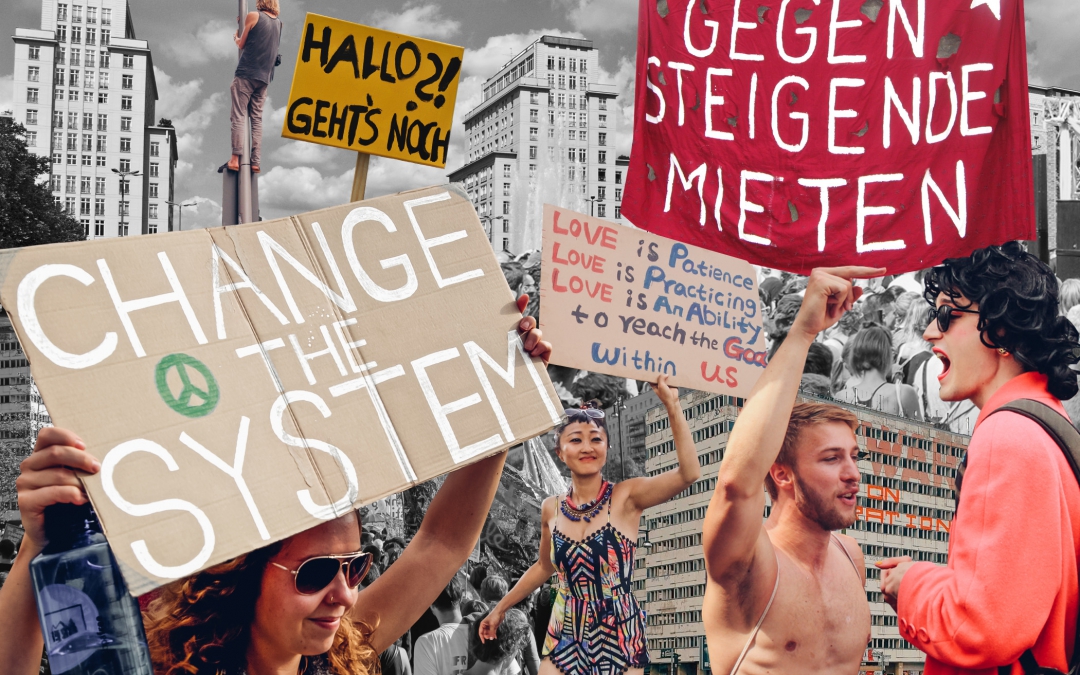 Our city is changing. As long as we’re loud enough, it can change for the better.

My body is still sobering up from excessive new years celebrations when I leave my apartment on Karl-Marx-Allee on this frosty Thursday morning. I might feel like trash, but stepping through the elegant row of columns guarding the gates to the monumental ‘Stalin-palaces’, I live in, just gives me something grand each time.

I’m on my – semi-thought-through – mission to keep it that way: I’m buying my apartment! – I’m 25, I just finished my studies, and my savings got me as far as a new MacBook… Turning around the corner to Ostbahnhof, nervously fiddling with the pile of signed documents in my right hand, I ask myself: Have I gone mad?

In November 2018, the iconic apartment blocks on Karl-Marx-Allee were sold to not just any but the private investor (link), called ‘Deutsche Wohnen’, with a reputation for relentless rent increases and eviction of long term tenants. 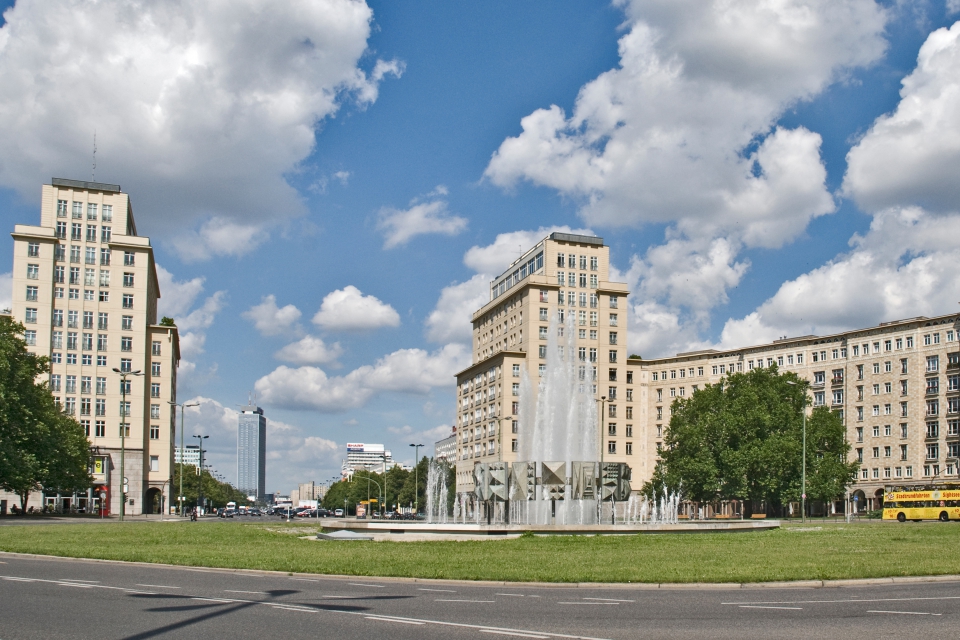 A (notoriously) hopeless case. But it wasn’t! Spearheaded by a dedicated and determined few within the streets’ tenants association, Karl-Marx-Allee started a revolution. Red and yellow flags out of hundreds of windows, and countless giant, inscribed banners facing the street: Berlin’s biggest boulevard was on fire!

The events that followed are unprecedented and almost surreal: In order to bypass ‘Deutsche Wohnen’, Berlin’s Senate, tenants and the district of Friedrichshain-Kreuzberg joined forced and ‘created’ a legal loophole to ‘re-communalize’ 680, formerly district-owned apartments that were sold at the beginning of the 1990s.

The press went wild and reactions were mixed. Conservative and liberal voices spoke out against the plans: Favoring a few Berliners’ apartments at the expense of everyone’s tax money?! That’s unfair! However, stopping the sellout of Karl-Marx-Allee, and its socialist landmarks, can also be a political and cultural signifier for Berlin’s future, a city that struggles to stay off the beaten tracks other global cities have spiraled down on, and path its own way. 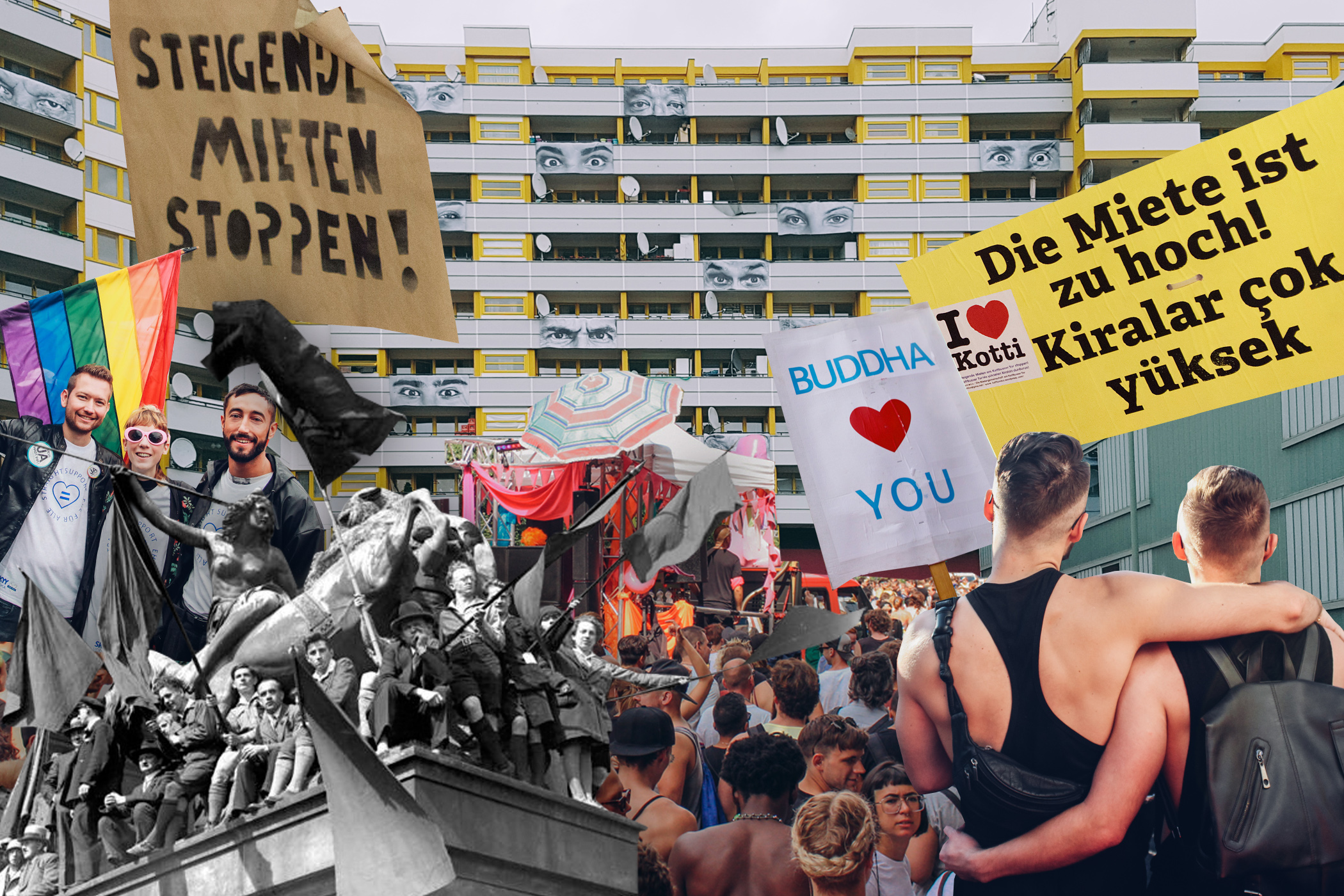 So, there I was, exercising my right to purchase my own apartment – on paper – while in theory immediately selling it to an urban housing company, called ‘Gewobag’. I hesitate before handing the 30-page-long pile of confusing German bureaucracy over to that East-German ‘Oma’ in front of me, representing the tenants association. She looks at me through her horn-rimmed glasses, friendly smiling, but she also doesn’t seem to know what I’m waiting for. In fact, I honestly don’t fully understand what’s happening here. But sometimes you have to follow your gut feeling.

Berlin is at it’s best when Berliners make some noise and do what feels right to them. I’m thinking of the ‘#Unteilbar’ demonstration in October 2018 and a quarter million people demonstrating against racism and xenophobia. The ‘100%TempelhoferFeld’ initiative fighting for years to protect the former airfield from urban development plans, the big eyes installation at Kotti protesting the sale of the Kreuzberg Center, and the ongoing struggle of the people behind Holzmarkt25 to create a space for art, music and club culture in the heart of Berlin where private investors would rather build corporate offices and loft apartments.

If Berliners weren’t so good at making some noise, there’d still be that ugly piece of concrete dividing the city.

I smile and get a wrinkly smile back from ‘East-German-Oma’, still waiting. Sometimes you gotta be loud, impulsive, and a ‘lil naive to make things better…

I hand over my documents.