The Privilege to Party: Bottega Veneta Criticized for Afterparty at Soho House during Lockdown 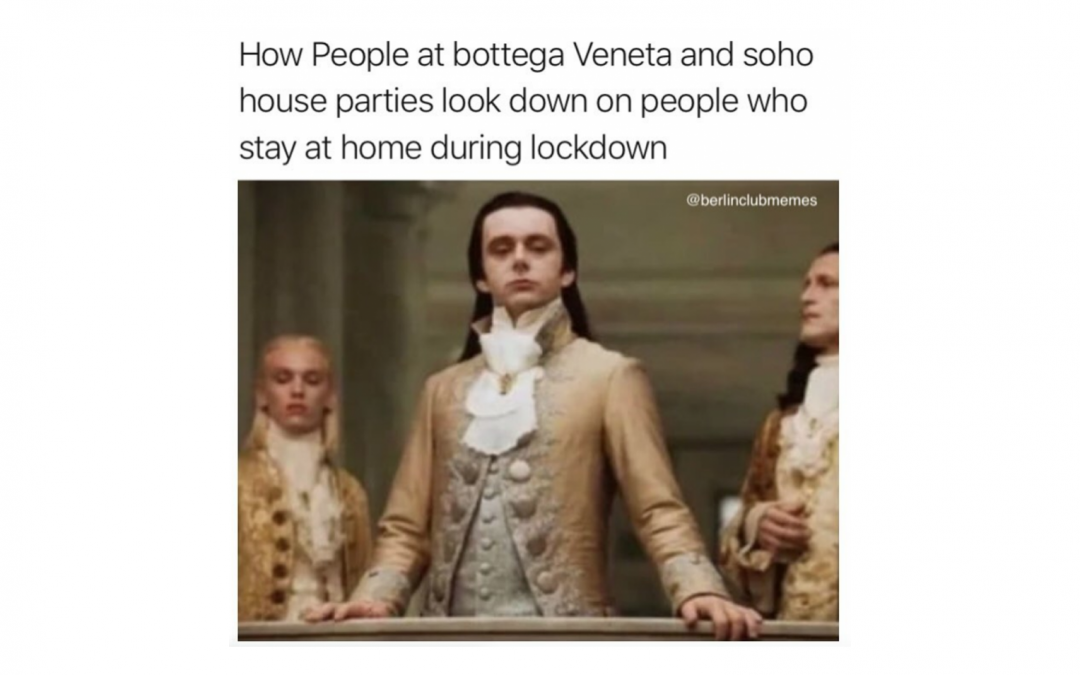 With lockdown being extended every few weeks and more intense measures implemented in seemingly fruitless attempts to minimize COVID infections, we’re all looking for a way to unwind. I’m sure everyone would enjoy a normal party right now; being able to listen to music, dance, and drink with friends without constant fear of the virus. We may all crave it, but that doesn’t mean it’s fair considering our current circumstances. And it definitely doesn’t mean a party full of famous people will go unnoticed in this climate.

Italian luxury fashion house, Bottega Veneta, is facing intense criticism after hosting a fashion show presenting their Salon 02 collection in the concrete halls of Berghain, followed by an afterparty at the Soho House in Mitte on Friday. Local celebrities like Oumi Janta, Honey Dijon, and Sven Marquart were in attendance, as well as more internationally known names such as rappers Skepta, Slowthai, and Burna Boy, American designer, Virgil Abloh, and Daniel Lee, creative director of Bottega Veneta. Photos and videos of the Soho House afterparty were shared on social media, showing no social distancing, masks, or compliance with the increasingly strict lockdown measures.

Members of the Berlin Soho House are canceling their memberships to signify their rejection of the chic-hotel and member’s club. “Due to the pandemic and its regulations, that I fully support, I wasn’t allowed to step inside the Soho House member’s club for six months now. I paid full membership fees for the whole time and never complained,” says Chris Walter, a local member of the club for the past six years. “Why would Soho House host an exclusive afterparty, completely ignoring, hurting, and mocking our healthcare system, the health of their staff, the German law, and of course, their club members?” He specifies that it’s people like himself who finance the club and allow it to exist. Several other members shared that they have canceled their memberships.

BerlinClubMemes, the popular Instagram meme page, received a number of DMs from alleged Soho House employees and published these messages on their story anonymously. The posts described the Soho House’s treatment of staff over the past two weeks while they hosted the entire Bottega Veneta team. The messages report the club did not provide COVID testing for employees until the final two days of the label’s stay. “Bottega Veneta employees flew from all over the world to stay at the Soho House hotel,” one employee shared anonymously. “None of the required government standard quarantine regulations (5-10 days self-isolation) seemed to be followed.” The same staff member also reported that their concerns about health regulations were immediately dismissed and that they were “told to find someplace else to work.” According to another anonymous post shared on BerlinClubMemes story, Soho House Berlin made 700,000 euros from the arrangement with the label. 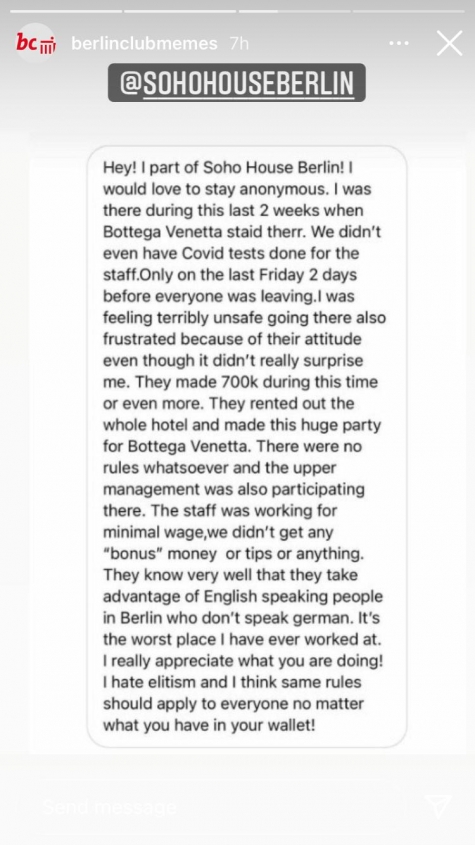 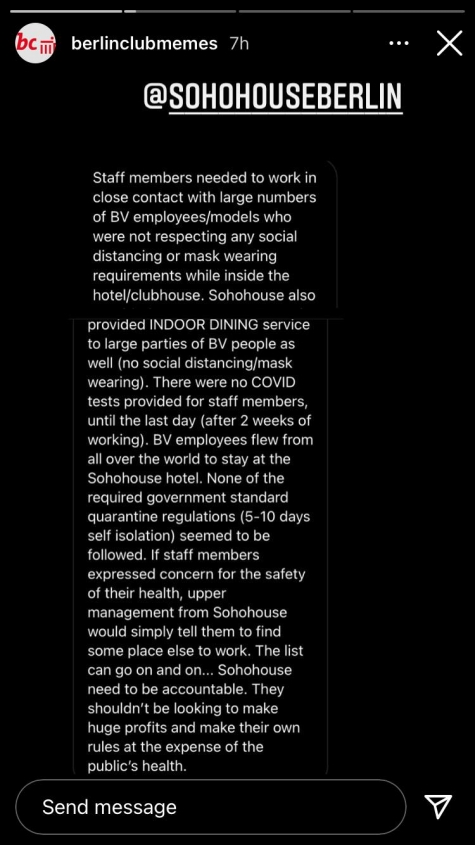 This behavior naturally leads to questions about how lockdown and quarantine measures seem to not apply to people with privilege. The staff risking their health at Soho House were reportedly making minimum wage, while the hotel raked in hundreds of thousands of euros. BerlinClubMemes shared memes criticizing the party all weekend. “Rich People from all over the world attended these events, in the midst of a German-wide lockdown and increasing corona numbers,” wrote the owner of the page. “Thanks a lot, idiots!” 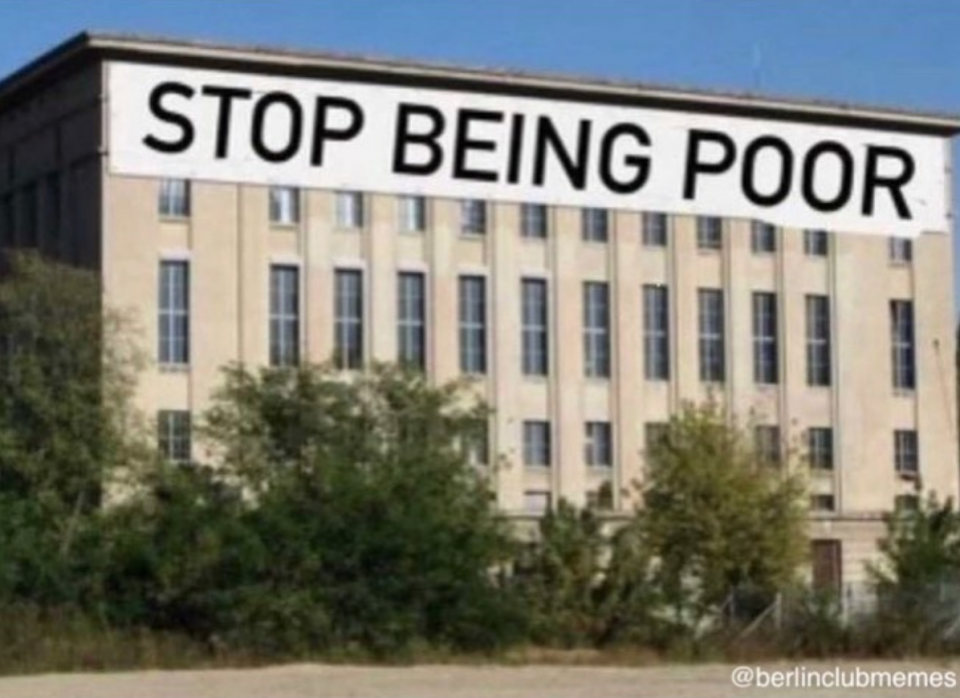 Soho House and Bottega Veneta seem to be facing the majority of the backlash, while few dare to criticize the most notorious club in Berlin. It seems Berghain’s golden and simultaneously gritty reputation protects the club, while the posh hotel and expensive fashion house are more appropriate villains.

This scandal sheds light on just how far privilege stretches, even in Berlin. The privilege to party may not seem important in other places, but in Berlin, this right keeps so many people sane. This display of blatant disregard will not go unnoticed in the city people flock to for its freedom and equality, especially when it comes to nightlife.