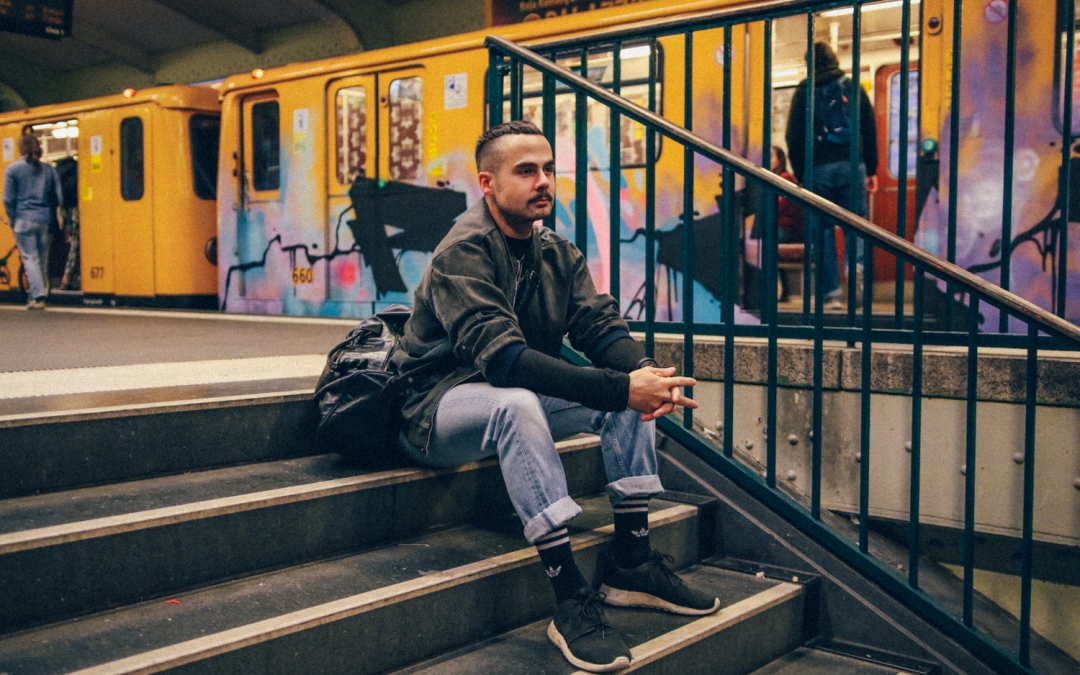 One last energetic jump—right before departure, I make it into the narrow U1 car.

Doors closing; I take a seat on the purple patterned bench,

letting my gaze wander: around me, commuters in disguise––fellow passengers hide their faces behind oversized scarves and collars, almost a dozen figures, in front of nostalgic wood paneling in chestnut brown.

Me –– on my way to that after-work fitness program; retrieving those last chunks of energy left in me.

Them –– on their way home, to a nearby bar at Kotti or just to a cinema in the neighborhood, quickly reviewing next year’s Oscar candidates on red velvet seats,

before, once more, it’s time for bed––

As I realize: I’m not being mercilessly pushed against the exterior wall for lack of space, nor inhaling the smell of kebab that smacking, middle-aged man next to me is breathing in my direction,

no necks right in my face,

Actually, I am sitting quite comfortably, in the subway, at 6:25 pm, on a Wednesday,

My brain is putting the pieces together, slowly. 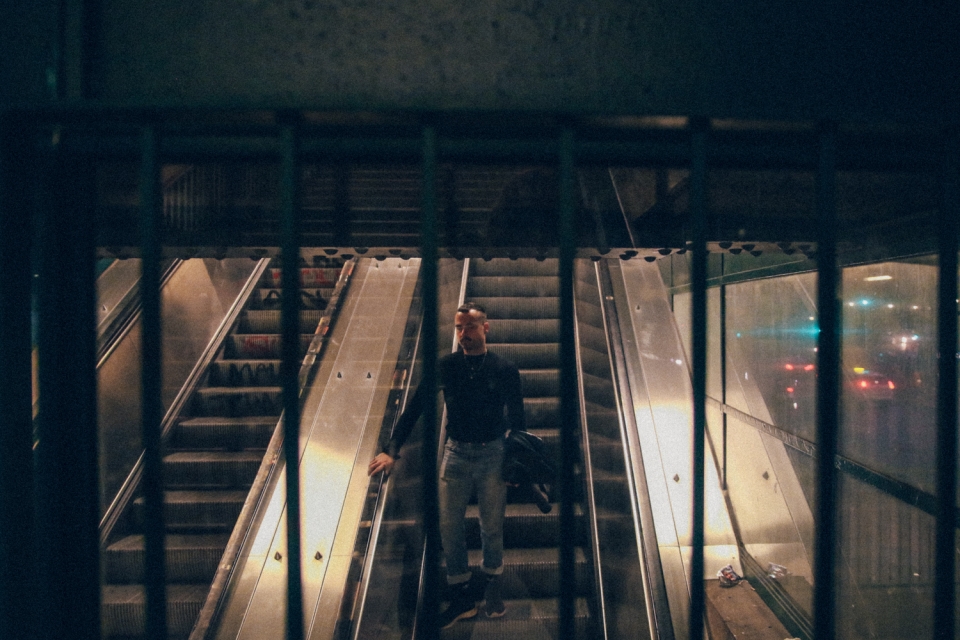 It’s just a few days before Christmas in Berlin:

the city of ex-pats, small-town-escapists, globetrotters.

A city of those who leave the old behind to discover new shores.

Yet, even the most renegade person returns to where it all began, at least once a year.

The metropolis runs dry; one week that puts hedonistic chaos on pause breaks up the dance on the volcano for just a couple of days.

When even the biggest rave in town goes for ‘one room will be enough this time’,

it seems like an otherwise restless city finally come to rest––

and I––lastly––get my seat on the subway.

“It’s that time of the year when you finally have air to breathe,” my noisy Ur-Berliner colleague enthuses at the office. “Around Christmas, my family and I always meet at those spots that are commonly too crowded…”

Slowly strolling on Simon-Dach with Mommy…

Riding your bike in zigzags on Tempelhofer with Daddy…

Using three stalls in the club toilet with your old school friends all at once…. just because you can.

My pondering carries on as I ride down the escalator at Kotti, unknown spaces in front and behind me.

Once more, mixed feelings about tomorrow’s departure emerge; leaving Berlin behind, that’s like an unwanted organ transplant, every time;

I make a turn to the right and head into the tiled tunnel in greasy shades of beige heading towards Kottbusser Damm.

As usual, a man I call Berthold sits on a ripped, grey blanket at the corner to the tunnel, joined by his Labrador Dexter in speckled brown and black colors.

To this day, I haven’t actually talked to this man. But still, for some reason, this deep-wrinkled, short man has always appeared British to me…

at least, that’s how he became Berthold in my head; yet, as usual, I am lacking the courage to actually discover the real name hiding behind that woolly hat pulled down right to his sincere brown eyes,

As I do every day, I give him a little smile––the least I can do––even if no coins make their way into a paper cup.

Berthold smiles back tiredly; his gaze is still sharp, no scars on his skin, no worn bandages around his calves––

Tomorrow, when fewer and fewer people step into the city’s underground,

from Spandau to Hönow, Rudow to Tegel,

he will still be sitting here, waiting. 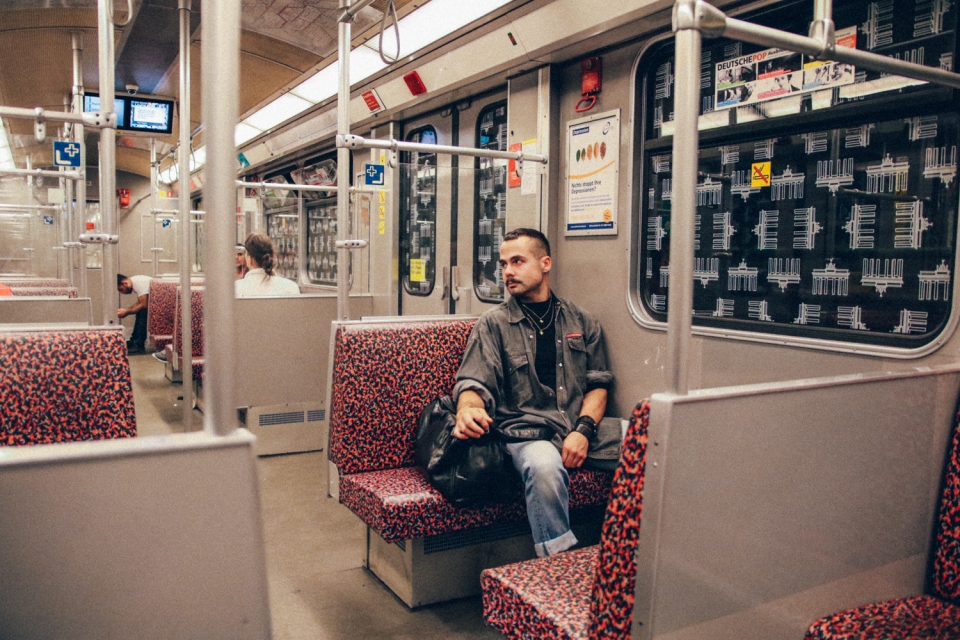 In less than a week, when the city is back to its buzzing state, this corner will once more provide an illusion of community, amidst anonymous streams of people.

But for now, as flocks of Berliners make their long way to gather around chopped down pines in glittering decor––whether that’s loved or despised––

I walk up the stairs, lost in my thoughts,

ending up in the midst of Kottywood; glaring blurred lights, strange faces in dark concrete gates, and the smell of old burned meat mixed with pungent oriental spices.

The young man with a mustache and that black and red leather jacket, who turns the corner every day at 6:30 pm with a smile on his face, won’t show––

Whether it’s meeting your loved ones or a full house of indifference;
a celebration of love for some, a forced festivity by candlelight for others––

it’s the most bizarre time of year.

“We’d like a three-day idyllic family excursion at all costs, please, thank you!”

But at the end of the day: I am not alone in this annual anomaly.

And I am grateful for that.

…Nighttime realizations in winter just outside your Kreuzberg gym.

not even for a simple “hello”––