A Summer Night at Jackie O

Last night we had the pleasure to spend a wonderful summer evening and night at the Jackie O bar at the Spree a bit outside of the city center. Considering the destruction of the club culture and the monopolization of some clubs it comes to no surprise that the number of locations far from the center are growing and becoming more popular. Beyond the S-Bahn ring you are a bit more save from neighbors complaining about noise, impossibly high location rents and also the mainstream party tourism that has sadly dissolved the coolness of a lot of clubs and parties in the past couple of years.

Jackie O is one of these locations that has remained a well kept secret for a few summer seasons now. It’s a short bike ride from Ostkreuz down Köpenicker Chaussee across from Sisyphos and next to Hafenküche. It’s charming outdoor area is right at the river bank of the Spree and in case of bad weather they also have a nice indoor bar and dancefloor. The audience here is not as young, more like 30 plus and definitely more local than it’s neighboring Sisyphos.

Last night they celebrated a summer party with some food stalls, an awesome live concert with Noah Becker’s band Bakery, the first (and golden) edition of the Absolut Art Bar, and the opening reception of the artwork Diagint by Ian Stell. For some impressions have a look after the jump.

Artist Ian Stell proudly standing on his piece Diagint, an X-shaped staircase that was standing right at the river bank of the Spree: 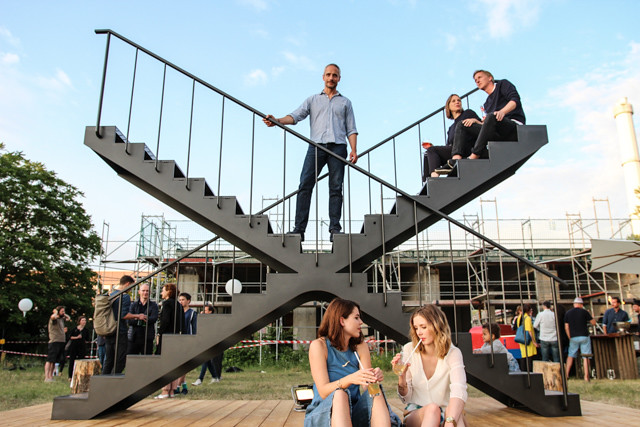 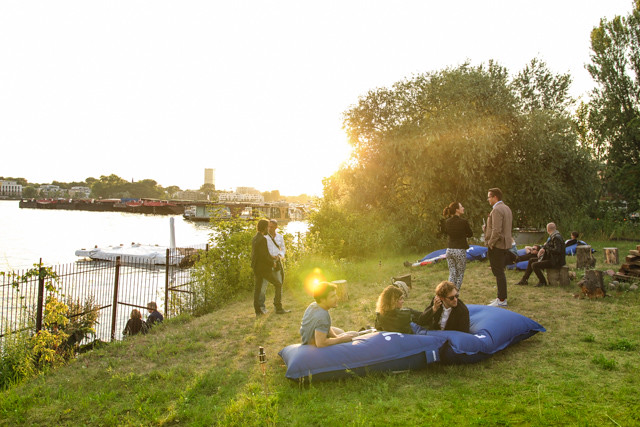 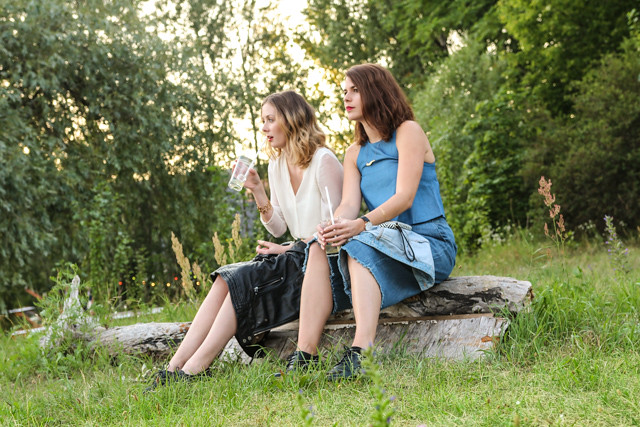 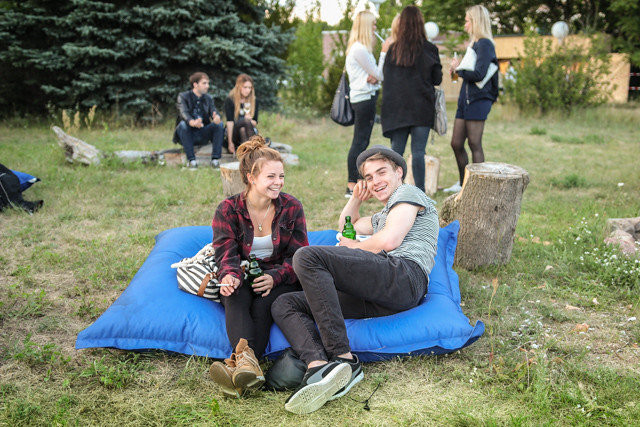 The Jackie O bar also has a landing stage for boats, so if you happen to have access to one you can arrive here by boat. They also have their own little boat of the same name. 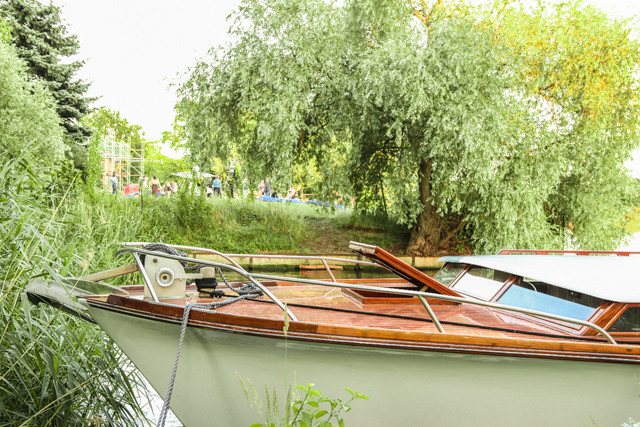 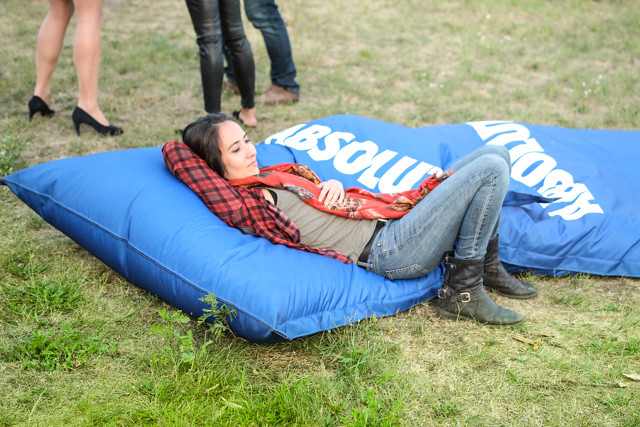 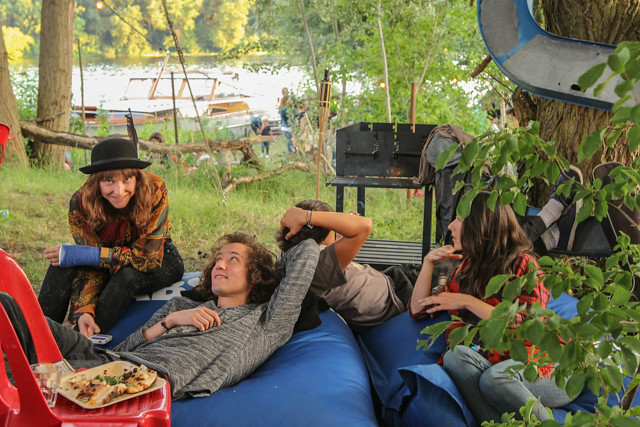 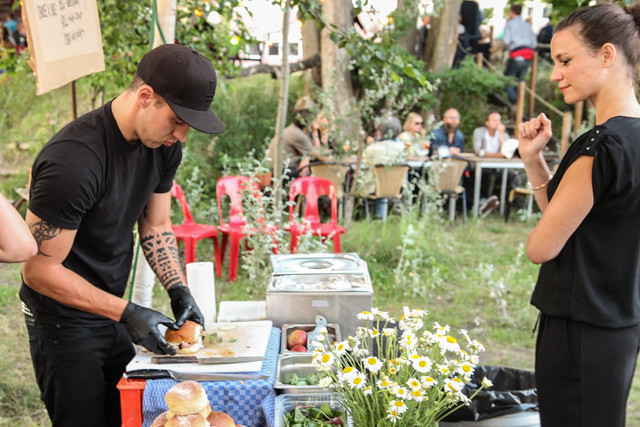 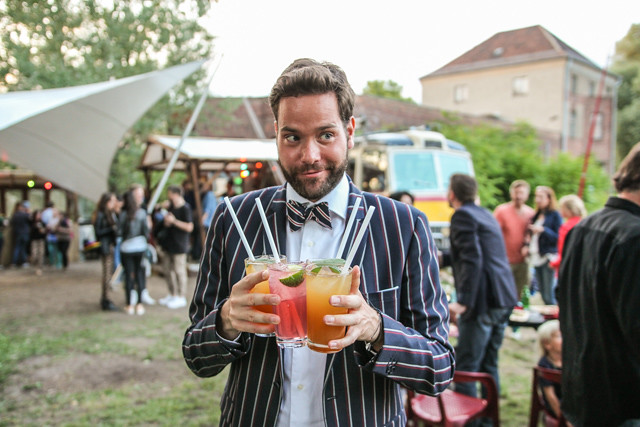 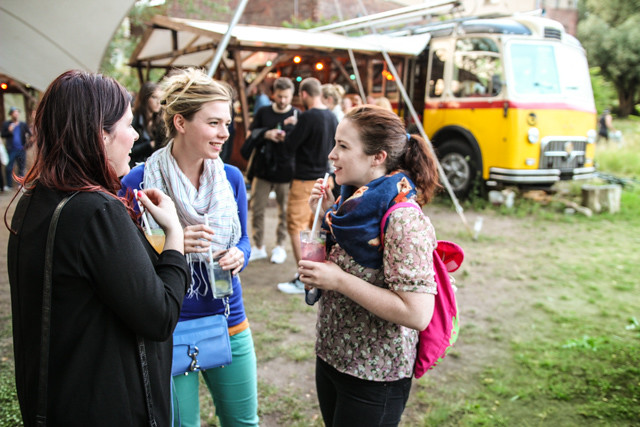 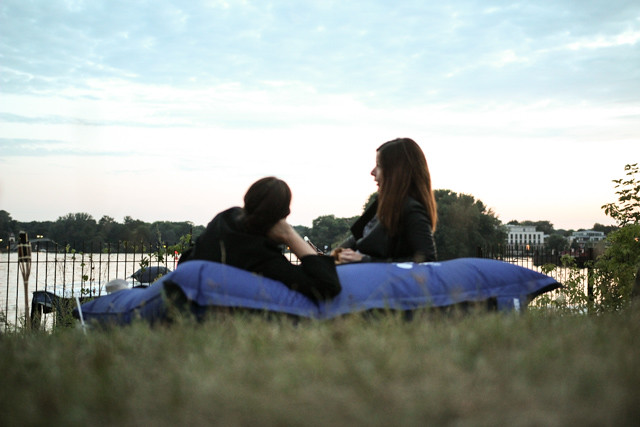 It was the first time I saw the band Bakery from Noah Becker (photo right) the son of former tennis star Boris Becker and TV actress Barbara Becker. They were pretty awesome and played such a long set! 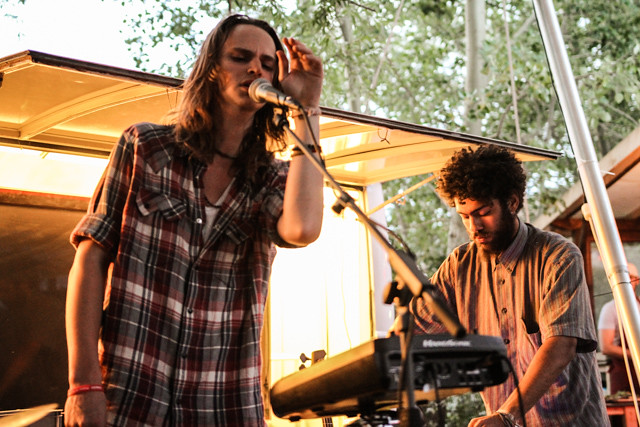 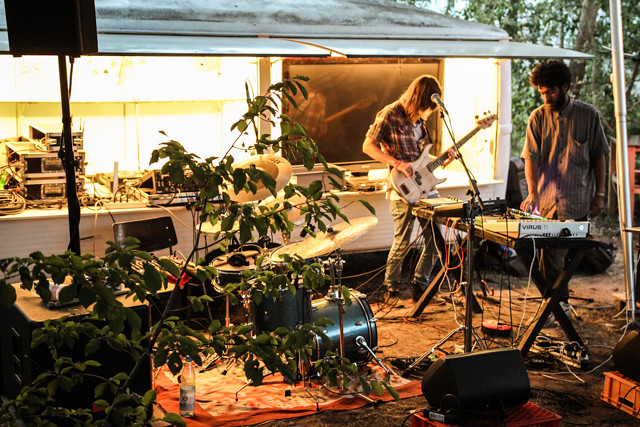 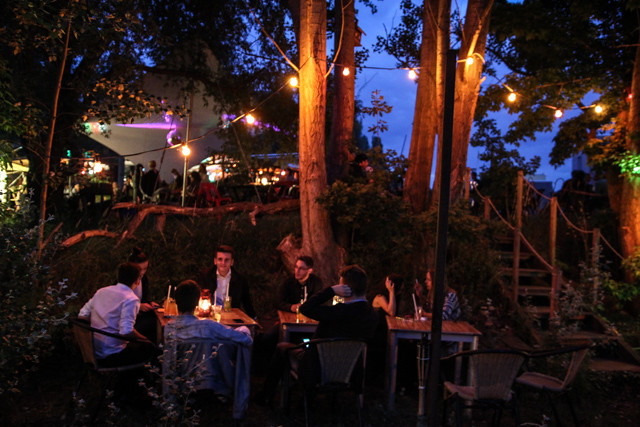 The bonfire atmosphere was really magnificent and made everything feel very familiar and cosy. 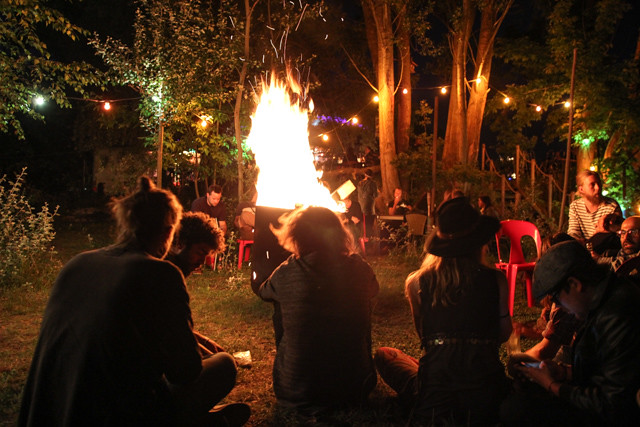 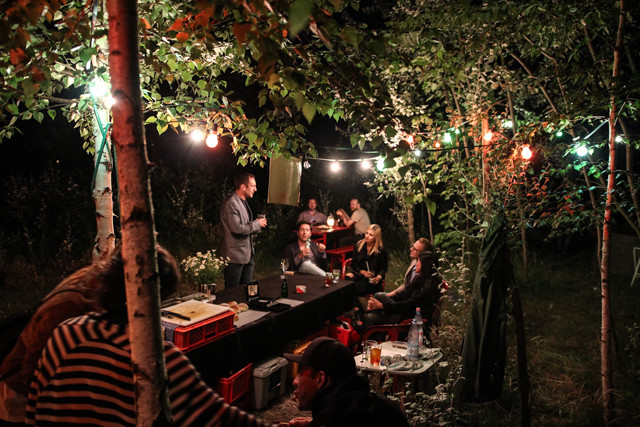 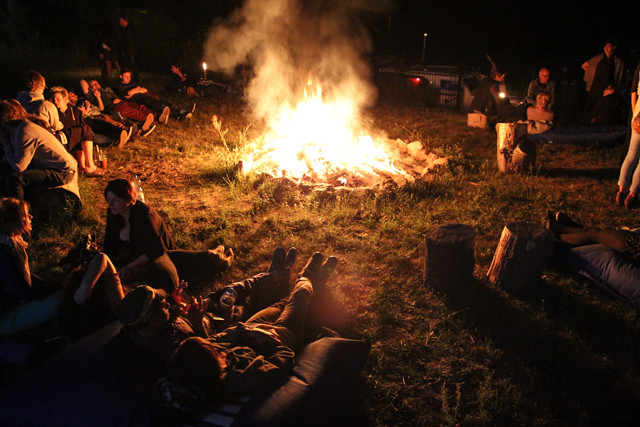 Right in the middle of the party was the first edition of the Absolut Art Bar. It’s a series of art and design related nightlife events that is going to happen here in Berlin in the next couple of months. The stunning golden bar for this edition was designed by Thies Wulf who is the artistic director of Design Hotels. The next Absolut Art Bar is coming up on August 1st and will be hosted by… iHeartBerlin in collaboration with one of our favorite young artists in Berlin… Stay tuned for more soon! 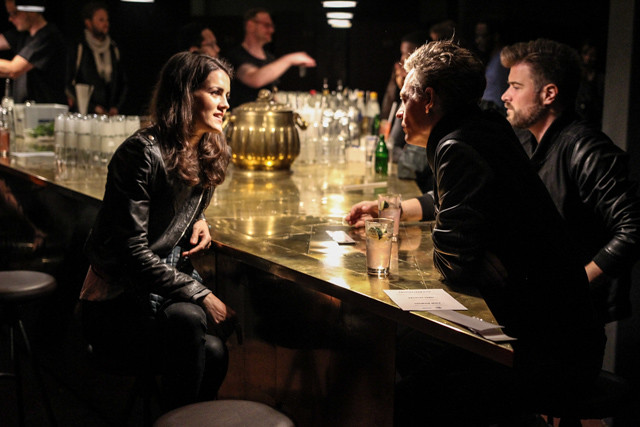 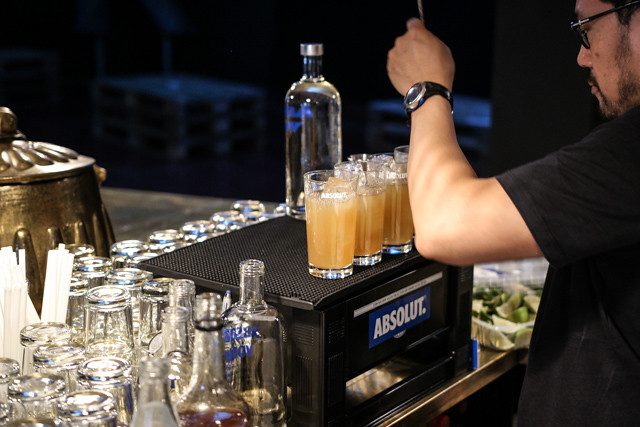 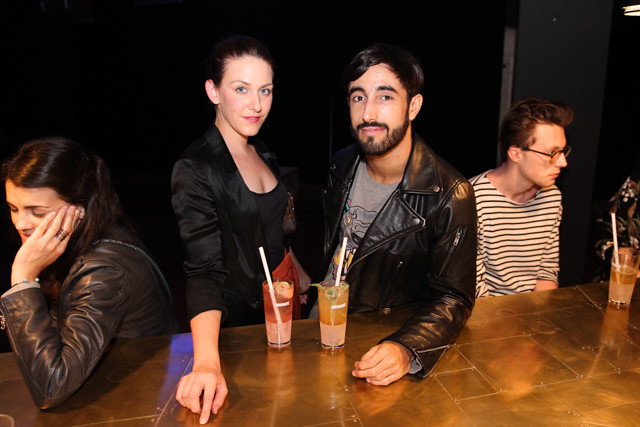 The events at Jackie O are a bit hush hush. They don’t have a public Facebook page, only a small private group. But keep an eye out for their parties in our event guide.

Enjoy some more party photos of the night at Jackie O on the next page!