A Guide to Public Pools in Berlin 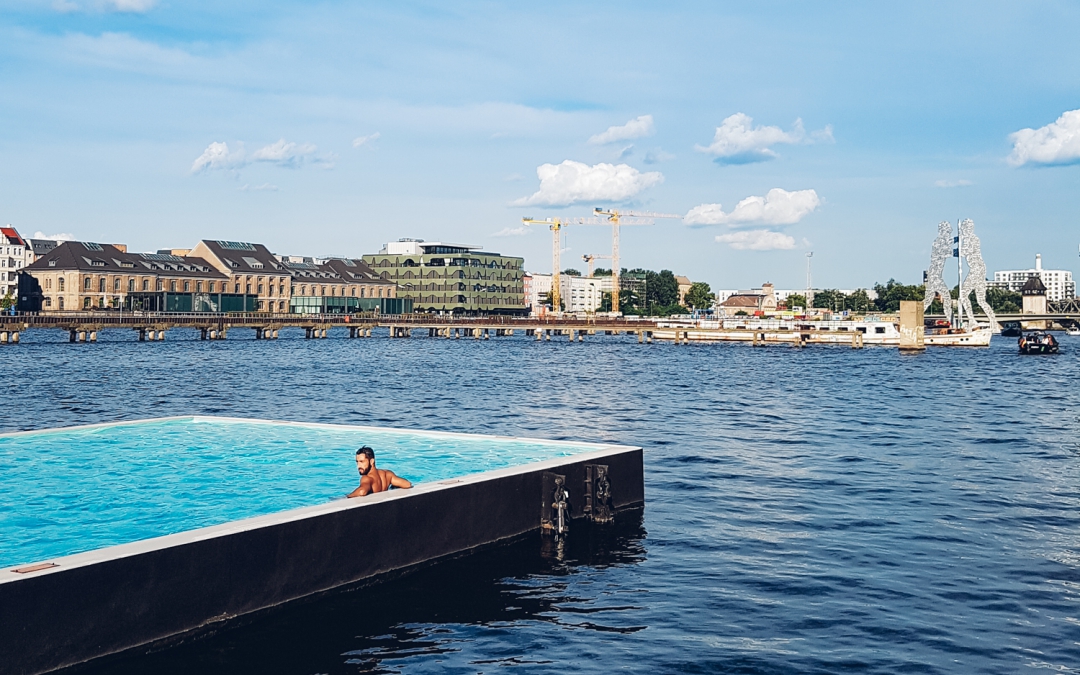 When it’s really hot in Berlin and the time is to short to go outside of the city to the lakes the only other option to cool down a bit is hitting the pools! Luckily, Berlin has a whole bunch of them from traditional public swimming pools, to cool urban pools and spas with open-air pools – there is something for every taste.

So it’s time for you to pack up your swimsuit, smack on some sunscreen and head out to the public swimming pools of Berlin for a refreshment!

A personal favorite of iHeartBerlin’s Claudio this might be the most central and practical public pool we have located not too far off Kotti at Prinzenstraße. It was recently renovated, has a big pool and a huge grass area to chill out in the sun. We couldn’t ask for more!

Located right by Olympiastadion the Olympiabad might have the coolest look architecturally and will also get out the athlete in you. And since it’s a bit less central than the others you might also find it less busy here.

Another popular swimming spot is located right between Tempelhofer Feld and Hasenheide in Neukölln. The Columbiabad is a magnet to young and old on the hot days and I’ve heard of long lines and club bouncer attitudes at the door. The fun waterslides might have something to do with it…

If you hear Pankow and think this is at the end of the world remember that Pankow is the extension of Prenzlauer Berg. So this is not to bad. From its condition, it’s one of the most modern and slick ones. It also has a big water slide and some other fun elements.

Embedded into the big Humboldthain Park this is another quite central option within the ring and the last one from the public pools in our list. It stands out for its cultural art program Tropez that you should check out! Also: water slide!

For the sake of completeness, there are several more public pools in Steglitz, Mariendorf, Jungfernheide, Wilmersdorf, Staaken-West, and Wuhlheide.

The Haubentaucher is a new space with a big outdoor pool on the RAW grounds in Friedrichshain at Revaler Straße that opened in 2015. It’s in a good neighborhood being surrounded by so many other awesome places such as the Urban Spree gallery, the Astra concert house,  and several other bars and nightclubs. The obvious benefit of this place is the huge pool, but even if you are not a fan of swimming you can still enjoy the loungy atmosphere (or the party if there happens to be one) around the pool. They also have open-air yoga sessions at the pool.

If you want a space that totally makes you forget that you are in Berlin or in any other big city for that matter the Balinese spa and sauna Vabali is definitely worth looking into. The space is really amazing looking and has a huge outdoor area with a beautiful pool and several different saunas. The gardens outside full of bamboo trees really create the illusion that you are somewhere far away on an island. They also have a nice Asian restaurant and offer several spa treatments. Be warned though, I know especially foreigners are not used to this, but the place is a no-textile spa, so no bikinis or swim trunks, in the saunas and pools it’s nudy time 😉

The Badeschiff, an old containership transformed into a pool that’s swimming at the shore of the Spree, is an old but good classic perfect to get a splash of water on a hot day. It might get a little busy on really warm and sunny days, but the more the merrier you could say. In the evenings they also have music playing and the occasional parties happening there.