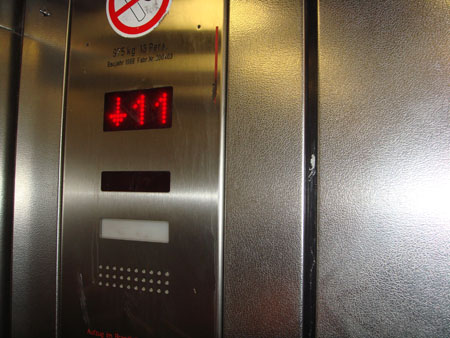 It ended how it all began: with an elevator on the 11th floor. In the video we received a month ago we were asked not to push the button. But when we finally stood in that same elevator, we actually did push the button. When we arrived the game that had developed from the video during the past month came to an end.

Yesterday evening we all met at a gloomy lake outside of town to prevent a murder from happening. After stepping around in complete darkness we realized there was no murderer and no victim. Instead of being the heroes, we became victims. Three black vans arrived at the lake, a group of men in ski masks blindfolded us and shoved us into the vans. Thirty minutes past before we arrived at a high rise in Gropiusstadt. There we were led into the infamous elevator. On the eleventh floor the game situation was resolved as we met the man behind the curtain. The author of the soon to be released book “Das Kind” (the child) which this game was all about. Upstairs on the 29th floor of the building we spent the rest of the evening chatting with the author, the publisher and the staff of VM-People, the agency that made the game reality. Read my comments on the push11 forum and check out my flickr photo album that documents the whole evening.

The thriller “Das Kind” (the child) by Sebastian Fitzek will be released on January 12th of next year by Droemer Knaur.