Unfortunately we could not make it to every show of Fashion Week. Our  biggest lost was the amazing show of Tata Christiane, Vava Dudu and Charlie Le Mindu at the Uni+form Store. But sometimes photographs can be more than just a documentation. Watching the amazing pictures of Olga Khristolyubova I really had the feeling I was at the show. This is why I had to share them with you. See show and backstage photos after the jump.

END_OF_DOCUMENT_TOKEN_TO_BE_REPLACED

The Fruit Salad: There is a Piece of Art on your Head – Charlie Le Mindu

I love big hair. More hair you have more fun you are on the dance floor. There is nothing more electric than a girl who can show off her massive hair. If you don’t have so much, you don’t have to worry my dear fashionistas. The superman of wigs Charlie Le Mindu was in town for Fashion Week and we were all really impressed by his beautiful hair sculptures. His show Gold Sabah at the Berlin Fashion Film Festival over the pool of Badeschiff was BEYOND. I wanted to have nearly all his beautiful head pieces for my upcoming episodes. And well, maybe I will. See some backstage pictures and a video of his show after the jump.

END_OF_DOCUMENT_TOKEN_TO_BE_REPLACED 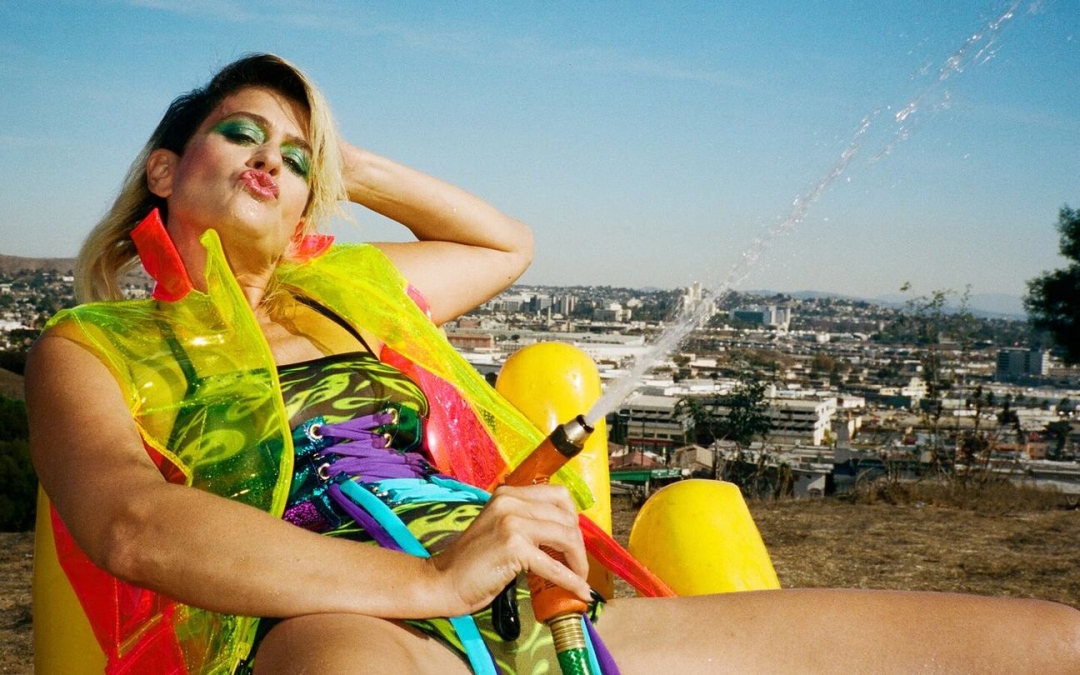 There’s only one Peach with the Hole in the Middle

See the iconic Peaches at the Volksbühne!

Over the past 20 years, the musician and artist Peaches has designed a comprehensive work that focuses on music, performance and a multimedia drawing game. With her music she makes thousands dance in the clubs of the world and appropriates traditionally masculine connoted genres like rock, punk, heavy metal and rap. Her explicit lyrics about body images, gender trouble and social inequality read like postmodern poetry. As a master of uncompromising avant-garde popularization, she has made sex-positive feminism socially acceptable on the concert stages of the world.

With THERE’S ONLY ONE PEACH WITH THE HOLE IN THE MIDDLE, she creates a futuristic stage event with almost 40 musicians and performers. Inspired by the variety shows of the 70s LGBTIQ * icons like Bette Midler and Liza Minelli and with costumes by avant-garde hair and fashion designer Charlie Le Mindu, Peaches catapults her vision of the past, present and future of queer feminism to the big one Stage.

The Happy Bubbles of Hope – A Performance by Andrey Bartenev

After last year’s crazy golden naked Haute Coiffure runway show of Charlie Le Mindu at Badeschiff the guys from the Berlin Fashion Film Festival invited Russian performance artist Andrey Bartenev and his happy bubbles to be the big show act for this year’s BfFF Award Show that took place at the former silent movie theater Delphi along with a live music performance of chart-topping Dutch act Kovacs. The show was absolutely out of control, joyful and crazy and we loved it. Our talented contributing photographer Olga Khristolyubova caught some shots for us backstage and during the performance by Bartenev. Enjoy the madness after the jump on 3 pages!

END_OF_DOCUMENT_TOKEN_TO_BE_REPLACED

The Fruit Salad: GIF me a second Head, please

Yeay, I have my very own Fruit Salad website now here on I HEART BERLIN where you can watch all my episodes and find all my articles. It’s amazing and totally ingenious. Speaking about ingenious, when I was trying on my outfit for the shooting of the first episode, I had an ingenious idea. Would I look better with another head on top of me? I mean, seriously, what could be a better accessory then a whole head on your head. Well, I am not the only genius, because Charlie Le Mindu thought the same thing. The name of my head is Lola. Lola is from South America and she feels really cold here in Berlin so I had to give her a little woolthingy to feel better.

If you want to know more about my outfit: The crazy pattern dress is from Otto and all the rest is some vintage stuff I bought at several fleamarkets. See more photos and animated GIFs of the outfit after the jump.

END_OF_DOCUMENT_TOKEN_TO_BE_REPLACED

The Second Detail / LIB / Half Life

THE SECOND DETAIL is an analytical reference to the geometry of classical dance, pushing the dancers to their limits of balance and flexibility. While mastering complex movements, they are compelled to perceive themselves consciously in several perspectives within space. Despite this intellectual approach, THE SECOND DETAIL reaches the spectator in a direct and sensual way.

Alexander Ekman aims at creating works which the majority can connect to, exploring topics everybody can relate to, which both entertain and question the audience. For the first time he is working with the Staatsballett Berlin, creating a new work for the company’s female Principal Dancers and a male Soloist. The costumes are creations by hair artist Charlie Le Mindu that force the virtuosity of the ballerinas into bizarre situations.

The Israeli choreographer Sharon Eyal is one of the protagonists of the contemporary dance scene and, with HALF LIFE, has developed a work of hypnotic effect in the field of tension between man and machine, between collective and individual, techno and contemporary ballet. The pull of this work also results from the music that Ori Lichtik created during the choreographic process.

On Friday probably 90% of our fellow bloggers were celebrating at the StyleNite after party because apparently that’s the place to be that night. We had a different place to: The after show party of some amazing designers who we love and who are as mad as a box of hair (at least in the case of one of them this is meant quite literal): Tata Christiane, Charlie Le Mindu and Vava Dudu. The crazy party organized byconcept store UNI+FORM took place at P.O.P. and none-other than Peaches was entertaining the eclectic crowd. Some impressions after the jump.

END_OF_DOCUMENT_TOKEN_TO_BE_REPLACED

If fashion week is war, runway is the battlefield. And I did a good portion of fights last week to go to each event and make sure that everybody noticed that I was there. Is this egomanic? I do’t think so. To see all my adventures at Berlin Fashion Week and to see the shows I visited and enjoyed the most (Patrick Mohr, Moga e Mago, The Shit, Lena Hoschek, Mark Stone and the best of them all Charlie Le Mindu) please have a look at the third episode called Runway after the jump.